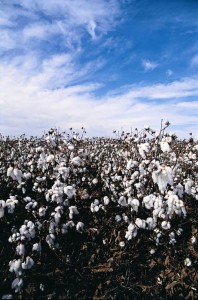 It took producers more than 50 years to beat the 1949 Texas cotton production record, but just one year after the 7.78 million- bale bumper crop of 2004, the record is expected to fall again.

It took producers more than 50 years to beat the 1949 Texas cotton production record, but just one year after the 7.78 million- bale bumper crop of 2004, the record is expected to fall again. According to USDA projections in December, the nation’s leading cotton- growing state will produce 8.1 million bales in 2005. The Texas High Plains, the largest contiguous cotton region in the world, is on track to produce roughly 5.6 million bales, slightly more than two-thirds of the state’s total. In 2004, the region produced 4.8 million bales.

While cotton production is higher across the state, so is the cost of producing the crop. The price of oil affects almost every farming activity, from irrigating the crop to harvesting and transporting it to the gin for processing. Energy costs affect the gin as well.

“Everything has really gone up tremendously, and it’s going to cut into everybody’s profits,” explained Jon Ramsey, a Crosby County cotton producer. “If we had average yields this year, we’d be in a hole, but I was lucky enough to have both good yields and outstanding grades.”

Most producers on the Texas High Plains reported their crop was of excellent quality. On average, the 2005 High Plains cotton crop has proven to be superior to previous years in virtually every fiber quality category. Considering the dramatic difference in harvest conditions when compared to a rain-drenched and troublesome 2004 season, a dramatic quality improvement this year is not surprising.

“The higher cotton production in 2005 is the result of a fortunate combination of timely rains, good weather throughout the growing season, cottonseed varieties that produce higher yields, and a successful boll weevil eradication program,” a cotton analyst explained.

Conditions also were favorable for excellent crops in Oklahoma and Kansas. Due to higher yields and a growing number of acres planted to cotton, Kansas farmers expect to produce the largest cotton crop in the state’s history. USDA currently pegs the crop at 90,000 bales, compared to 71,000 in 2004, but some industry observers place the Kansas crop closer to 105,000 bales. USDA also anticipates a 350,000-bale 2005 cotton crop in Oklahoma, the largest crop in the state since 1990.

Not to be outdone by Texas, both Oklahoma and Kansas produced a superior quality of cotton as well. The higher quality cotton available from producers in the Plains Cotton Cooperative Association (PCCA) growing area this season has opened new doors.

“We’ve had more opportunity to sell into markets where we haven’t normally been active,” said PCCA’s Vice President of Marketing Lonnie Winters. “The increased quality of our cotton this year has gotten us into the doors of mills in China, Indonesia, and Turkey where they typically source only high-grade cotton from other growths. Demand has been very good so far (as of late December), but we still have a long way to go,” Winters concluded.