A Career Dedicated to Cotton and the Farmers Who Grow It: Lonnie Winters

One of the most trusted and respected individuals in the cotton industry, known for his honesty, integrity and dedication to cotton farmers is retiring this year. His outgoing personality has been a perfect fit for his 47-year career in the cotton industry. His last 25 years at PCCA will come to an end on Aug. 31 when the co-op’s Vice President of Marketing, Lonnie Winters, retires. Raised on his family’s farm near Lone Wolf, Oklahoma, where he learned his work ethic, Winters began his cotton career in 1972 working in the office at Granite Farmers Co-op Gin eight miles west of his hometown.

“The cotton industry had always intrigued me,” he said, “and a couple of years later I was named manager of the co-op.”

At just 22 years of age, Winters became the youngest gin manager in Oklahoma. Little did he know he would stay in the industry or have such a positive impact on so many farmers. After working at the co-op gin, Winters worked for the W.R. Moore Cotton Company buying cotton in Oklahoma and Texas before moving to Lubbock to work for Hohenberg Cotton.

“I thought I would only be in Texas for six months, but I never left,” he said. 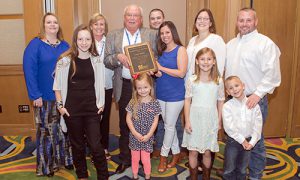 Lonnie Winters pictured with family when he received TACC’s Cooperator of the Year honor in 2015.

In 1993, Winters was hired as PCCA’s Sales Manager, selling cotton in domestic and export markets.

“I came to PCCA because of the staff and friendships I had built here,” he said, “and because I knew this co-op was respected and trusted around the world which made my job easy. PCCA has the best employees and most loyal grower-owners in the industry.”

Winters was promoted to Vice President of Marketing at PCCA in 2004 and briefly served as the co-op’s Interim President and CEO in 2015.

It would be safe to say he has seen it all, the highs and lows of the cotton market, trade issues, attacks on farm policy, bad legislation and regulations to name a few. Even in the worst of times, Winters was a compass that helped keep PCCA on the right path. At times, Winters said he had sleepless nights, but his dedication and loyalty never wavered because he loves this co-op and its grower-owners.

“Our sales staff wakes up every morning knowing that we have the livelihoods of our grower-owners in our hands,” Winters said.

Throughout his career at PCCA, Winters has always been accessible to gin managers and growers, traveling countless miles to make personal visits and attend meetings in Texas, Oklahoma and Kansas. Almost every day, at times even on weekends, he has taken phone calls from growers, landlords and bankers to answer their questions about the cotton market.

Winters also represented the co-op’s grower-owners by serving on the boards of directors of the National Cotton Council, Cotton Council International and The Seam. He also served as president of the Lubbock Cotton Exchange and on the Board of Directors of the Texas Cotton Association. He said one of his most cherished memories is being named Cooperator of the Year by the Texas Agricultural Cooperative Council in 2015.

“So much could be said of our winner, but quite simply he does not cherish the spotlight,” said Texas Star Co-op Manager Buzz Cooper at the awards ceremony in Galveston. “Bottom line, his main goal is to adequately give the greatest return to his members. It’s not in his DNA to sugarcoat the situation and certainly not to overstep reality. His intent is to deliver the best return to those who are the bedrock of our society.”

Kevin Brinkley, PCCA President and CEO, said PCCA is a better company because of Winters.

“Of all the many things I have learned from Lonnie, the value of discipline and consistency may be the most important. His approach to his job has been a bedrock for this cooperative and the way it serves its membership. It’s no accident that our farmers look to us for reliable solutions in a world filled with uncertainty. Lonnie’s impact on this company will be felt for generations to come,” Brinkley said.

In retirement, Winters and his wife, Donna, will spend some time travelling to visit their four children and eight grandchildren.

“It will be tough to leave PCCA, but wherever I go I will take with me all the friendships that have been built throughout my career,” Winters said. PCCA employees, grower-owners and their gin managers and employees will miss Winters’ standard work uniform, a long-sleeve white dress shirt, starched Wrangler jeans and black boots.