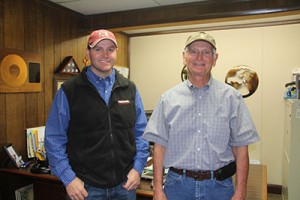 When Jim Newton moved from East Texas to Crosby County, he had no idea what kind of legacy he was creating. Four generations later, Jim’s grandson Steve Newton and his great-grandson Tony Newton are carrying on the family tradition of working in the ginning industry.

In 1929, Jim moved to West Texas and began working as a gin manager at Wake, and then moved on to Crosbyton, Nickel’s Gin, and Wellman, before eventually buying and managing his own gin. Jim was involved in the ginning business from 1929 until 1951, and then in 1958, Jim’s son, Robert “Bob” Newton, began working as the gin manager at Enochs Coop until 1992. Bob’s brother, Jay, was also in the gin business.

Bob’s son, Steve Newton, began working in 1984 at Citizen’s Coop Gin west of Shallowater, now known as Citizen’s Shallowater, where he worked until 1990 when he came to Owen’s Coop Gin and has been there ever since. Steve graduated from Texas Tech in 1977 with a degree in agricultural economics and decided he wanted to go into the ginning business because it was what he grew up around and always enjoyed.

Almost 100 years after Jim moved to West Texas, Steve’s son, Tony, has followed in the footsteps of his great-grandfather, grandfather and father as the manager at Slaton Coop Gin. Tony graduated from Texas A&M with a degree in agriculture systems management and went to work for an agricultural chemical company before deciding to work in the ginning industry.
Throughout all the years, Steve said one word of advice that has been passed down through the Newton family over the generations is to always work hard.

“My dad always told me hard work never hurts anybody,” Steve said. “Work hard, and you will be rewarded.” Another key piece of advice passed down through the family was the importance of good relationships with the producers, Steve said.

“The farmers are the best part of the business,” Steve said. “You cannot find any better people. That is why it is important to never forget who we work for and why we are here.”

Tony said the biggest piece of advice he remembers receiving from his father when he came into the business is to always offer the best service he possibly can.

“Anybody can gin cotton,” Tony said, “so the only thing you have to offer to distinguish yourself from the rest is providing great service.”
Steve said his favorite part about being a family involved in the industry is how it brings the family together and always gives them something to talk about.

“It is our common ground,” Steve said. “We all go through the same struggles and same rewards, and it lets us share the experience together.”

Steve’s wife of 40 years, Rhea Lyn, is involved in the ginning business as well. She started working with Steve in 1992 by running the scales at the gin, and today she sells and markets cotton at their office in Ralls, Texas. Steve said while their kids were growing up, Rhea Lyn would often go back and forth between work and pep rallies or other events for their kids.

“It takes an understanding from family in this business,” Steve said. “We miss a few ball games, and maybe a stock show here and there, but we make sacrifices and our family understands. They’ve supported me through it.”

Tony said he feels being a part of a family in the ginning business has given him an advantage over someone who may not
have grown up around it. However, he said young people are becoming more familiar through internships and programs that different organizations offer in the industry.

Tony said he is introducing young people to the industry starting with his own children since they live in the house across the street from the gin.

“People ask why we want to live there so close to the gin, and I tell them it keeps the kids close when work gets busy,” Tony said. “Also, the kids learn about the industry, learn how to relate with people from interactions with farmers, and learn the business aspect of it all.”

Steve said he thought it was important to raise his kids around the ginning industry because he felt it was a good environment to teach his children about work and responsibility.

“It teaches them a lot about responsibility,” Steve said,” and if there is a job worth doing, it needs to be done right.”

For Steve and Tony themselves, they said growing up around the industry provided them with many fond memories. Steve said his favorite memory is working long nights with his father in the gin yard one Christmas, and Tony said his favorite memories were learning to drive module trucks and starting to work in the gin when he got old enough and learning more about what all went into the process of ginning.
Throughout all of their years in the ginning business, the Newtons have seen many technological changes, specifically in computer controls and bale accounting systems, Steve said.

“When I first started, 20 bales an hour was good,” Steve said. “Now, 60 to 80 bales an hour is good. It’s gotten bigger and faster, and the speed of computerization has been a huge change.”

Another change Steve has seen was when TELCOT, an electronic marketing system, was developed by PCCA in the mid-1970s. Steve said PCCA has been a big help to him and to other ginners in the industry through all of the services offered. There has also been a fair share of challenges for the Newtons though, including rules and regulations, labor, costs, and uncertainty. To get through the occasional hard time, Steve said they hold their costs down and try to pay back as much money as they can to the farmers.

“The cooperative way is to keep what you need to operate and then give the rest back,” Steve said. Another aspect that helps in tough times is the quality of employees, he said.

“In all of the years I’ve been in this business, I have been blessed to have great employees,” Steve said. “It is so important to have people you can depend on and will do the job whether you have to tell them to or not.” The Newtons said they also support one another by communicating every day.

“Sometimes I can answer his questions and sometimes I can’t,” Steve said, “but we talk every day just like I talked to my dad every day.” Steve also said he is proud to follow in his father’s footsteps, and he is proud of his own son for carrying on the tradition.

If the legacy continues and Tony’s children, who are ages five, three, and 18 months, decide to work in the business someday, then the Newtons will be ginning cotton for five generations. Only time will tell, but they seem very hopeful in the continuation of the family tradition.