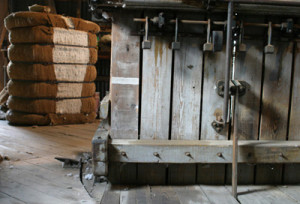 The aroma is a nostalgic combination of grandma’s cellar, daddy’s workshop, and the cool fall air when the wooden door creeks open at Burton Farmers Gin. The glow of pale yellow light bulbs and random rays of sunlight fall upon equipment from the turn of the century, allowing visitors to step back in time the moment they enter the historic gin.

Built in 1914, the Burton Farmers Gin located in Burton, Texas, is the last operational turn-of-the-century air system gin in the United States on its initial site with its original equipment. Designed by the Lummus Cotton Gin Company, construction of the gin combined the skills of engineers, mechanics and carpenters to bring the machine design, plant layout, and wooden structure into industrial accord. 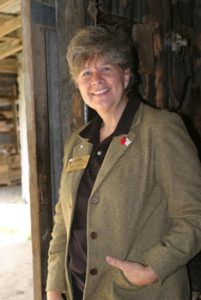 The cooperative gin served the farmers of the community for 60 years before a steady decrease of cotton plantings in the area eventually led to the plant’s closure. The once busy cotton gin lay vacant from 1974 to 1986, but when developers took an interest in the property with intent to build a strip mall, a group of local citizens formed an organization to save the gin. After several years of research and planning, restoration began in 1990.

Now the center of the Burton Cotton Gin and Museum (BCGM), guided tours of the facility are conducted year-round. The developer’s “strip mall” resulted in nothing more than a laundry mat and package store built adjacent to the gin. The BCGM eventually purchased that property as well, converting it into a cotton gift shop and museum.

Further down the road a bit, BCGM owns the Burton Cotton Warehouse. In addition to finished bales of cotton, the building now houses antique tractors, a 1951 IH cotton picker mounted on a Farmall H tractor and other cotton related farm equipment.

Linda Russell, the BCGM director, exhibits an unmatched passion and excitement for every inch of the historic property and each educational tidbit it contains. She and Business Director Jerry Moore have big plans for the little museum. 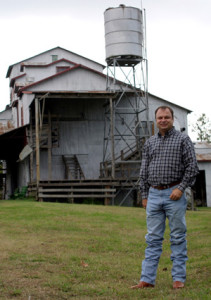 “We currently have a few wonderful, but small, cotton and ginning exhibits and a nice gift shop near the gin,” Russell says. “However, we eventually hope to raise enough money to build a larger facility to showcase our growing number of historical items and have more room for large tour groups and meetings.”

A BCGM volunteer for 20 years and a paid employee for five, Russell is very knowledgeable about the cotton industry and the history of the Burton Farmers Gin. To explain how cotton was produced and ginned when Burton Farmers Gin opened in the early 1900s, Russell often dons vintage clothing to describe the difficult task of picking cotton by hand. Her enthusiasm is contagious, and guests are sure to leave with a new understanding of the cotton industry from past to present.

“So many people have absolutely no idea how important cotton is in their daily lives,” Russell explains. “There’s nothing more rewarding than seeing that ‘ah-ha!’ moment people have at some point during their visit to the museum or the gin.”

There most likely are many “ah-ha!” moments at BCGM as the gin attracts visitors from many walks of life, and tour groups range from individuals to large organizations. The Burton Farmers Gin has been designated a Recorded Texas Historic Landmark and is listed on the National Register of Historic Places. Its Bessemer diesel engine made BCGM eligible to be listed as one of only 250 National Mechanical Engineering Landmarks in the United States recognized by the American Society of Mechanical Engineers.

Interestingly, the entire ginning system at the Burton Farmers Gin is mechanically driven by a single power source. A 1925 Bessemer diesel engine powers the ginning equipment through a line shaft, pulleys, and flat belting. This was a common arrangement for gins built during the first half of the twentieth century, but very few engines survived past 1970.

The 16-ton Bessemer Type IV oil engine is, by itself, a historical piece of equipment. Called “the Lady B”, it is the largest operating internal 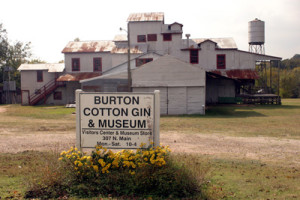 combustion engine of this vintage in the southern United States, and possibly, the entire country. Dormant for more than 20 years, the engine had fallen into complete disrepair. Luckily, a Mount Vernon, Ohio, company was able to provide an original printing of the engine parts list, and the original drawings of the parts had survived on microfilm. Many companies donated components and services, and a group of dedicated volunteers worked on Saturdays for 14 months until the Bessemer diesel engine started up again on Feb. 29, 1992.

The Lady B is in operation each year during the third weekend in April when Burton Cotton Gin processes a single bale of cotton to be auctioned off during its Cotton Gin Festival. Since 1990, the Burton Cotton Gin Festival has celebrated cotton and the rich heritage of the Burton community. The three-day celebration is filled with parades, folk-life demonstrations, contests, tractor pulls, crafts, entertainment, and great food.

In addition to the Cotton Gin Festival, the BCGM hosts a Barn Dance and Gala each October. Proceeds from the two major fundraisers are used for the restoration, preservation and support of the gin museum.

The museum’s small staff of two often is assisted by local volunteers and board members. A group of six retired men, affectionately called “the bollweevils”, donate their time and expertise to keep the gin in working order. In addition, an active BCGM Board of Directors includes leaders from the Texas Cotton Ginners Association, the Lummus Corporation, a retired cotton farmer, and a wide range of others who are interested in the preservation of the historical gin and the educational opportunities it provides. Cris Gwinn, Plains Cotton Cooperative Association’s South Texas Division manager, has served on the BCGM Board since January of 2008.

“It’s an honor to serve on the board of such a meaningful institution,” Gwinn says. “The story of cotton, and agriculture as a whole, involves everyone on a very personal level so it’s important to preserve the Burton Farmers Gin as a historical and cultural legacy for present and future generations.”