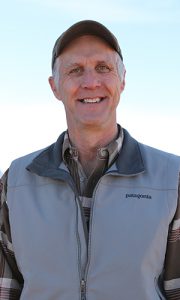 Kody Carson is one of the newest additions to the PCCA Board of Directors. Hailing from Olton, a small town in the Texas Panhandle where his family has been established since the 1930s, Carson has spent his life positively contributing to rural America, his community and his family. Recently, Carson was elected by his peers to help guide the business operations of PCCA. Serving as the director for District 2, he took his seat in his current position following the PCCA Annual Meeting in September 2018.

Carson and his wife, Kimbra, have two daughters and a son. Kimbra and Kiva are Kindergarten teachers while Kaymi is a NICU nurse. Their son, Kylan, currently raises show stock and is also involved in the family farming and cattle operation.

As an active member of his community, Carson holds board positions at Ag Producers Co-op and the National Sorghum Producers. He also spends time working to find alternative crops to integrate into his rotation, as well as promoting and supporting the community of Olton. Carson says one of his favorite things about community involvement is having the opportunity to collaborate with others from different backgrounds to accomplish specific goals, especially in the cooperative system.

“Farmers are pretty independent thinkers, and it is hard to get three of them to agree on much of anything,” he said, “but I love the way the co-op is set up where you have a board of directors from different communities different geographical sectors, and different ways of thinking. I also like the fact that not everyone agrees in the board room. I like having different ages the different sizes of farms represented, and I like the whole dichotomy of bringing it together from different perspectives to a consensus that is beneficial to everyone.

Carson was on the brink of beginning his farming career in the 1980s, a time when many others were having to make dire and often unwanted decisions concerning their operations. Recognizing that it was not his time to begin farming just yet, Carson earned his master’s degree from Texas Tech after graduating with his bachelor’s from West Texas A&M University in Canyon, Texas. When the time was right, Carson returned home to Olton and began the way of life that would soon lead him to becoming a leader in his community and in agriculture.

“You know, I grew up on the farm,” he said. “I don’t guess I really ever thought about wanting to do anything else. I knew I wanted to go to college, and when I got out of my undergrad it was the mid 80s. Farming was absolutely in the tank, people were barely hanging on. I had an opportunity for a scholarship to get my master’s so I went and did that.”

Carson’s first farming venture was helping a few older gentlemen in his community care for their land during the 1980s. He said for a couple of years he mostly custom farmed their land, and when he had built up the appropriate amount of finances, he started farming on his own.

“My dad and I always farmed in the same area and side-by-side but we never actually farmed together because I started off separately,” Carson said. “It never made sense to put the operations back together. People ask me why my dad and I don’t farm together and I jokingly say it is because we genuinely like each other, and we wanted to keep it that way. It is just the way it worked out. The last several years before he retired we have harvested together, which was fun for me because harvest has always been a special time to me. It was neat to get to do that with my dad.”

A TOOL IN THE BASKET

In the same way that farming has always been part of his family and community, Carson also said PCCA has been a sort of household name, which makes him feel honored to serve in the leadership capacity he does.

“If I am going to put time and effort into a organization, I wanted it to be something that would be important to me and my family for the long haul,” Carson said. “PCCA has been a staple of my family for years. We have always been involved with it through the cooperative gin, we have been in and out of the pool with different amounts an have utilized PCCA’s other marketing tools as well. I think it is a very well-run organization. It serves a huge purpose, and I think it has benefitted the panhandle of Texas millions and millions of dollars that would have left our area if PCCA wouldn’t have been here.”

Today, Carson uses the lessons he learned during the start of his farming career to serve others that need guidance and advice. He said one of the tools that has helped make his operation successful is PCCA’s marketing options.

“PCCA has been a constant player in my operation,” Carson said. “I market through the pool, I think it is a great marketing tool. It is no different than diversifying corn or wheat through hedges and forward options or forward contracting, it is just another tool to put in your basket. I have also used the bale contracts PCCA offers. I like the way that those guys are studying the markets every day, they are able to sell on economies of scale that I wouldn’t have the opportunities to as an individual.”

In addition to PCCA and the marketing pool, there are other aspects of the cooperative structure he appreciates as well.

“I also like the fact that it unifies me with other farmers to some degree,” Carson said. “I think through unity we have a bigger voice. PCCA has been huge in promoting and developing the cotton industry in West Texas and building overseas markets. You know, Kevin and the past CEOs, they spend a lot of time on the road working for us, trying to develop things that as farmers we either don’t have the skillset or the time to go do. I think that is one unique thing that makes PCCA worth putting my time and effort into.

FOR THE LONG HAUL

Time, effort and patience are key things that community, family and farming all demand. Carson said in the cooperative system, the benefits of one’s own contribution are often reaped at a later date.

“Yes, it is important to stay in business today, but you are here because you want to be in business 10 or 20 years down the road also,” he said. “Co-ops keep the money in our local economies – it is not sent off to another state’s corporate headquarters. There is also pride in ownership. If you are part of a co-op, you are an owner in that.”

In much the same way a new farming operation comes with increased responsibility to ensure its sustainability and profitability, so does being a active member of a cooperative. No matter the size or stature of the operation, Carson said everyone has an equal voice in how the business operates.

“As with PCCA, and with a co-op of any kind, you have a say in how it functions. If you like how it is working, say so, if you don’t that burden is really on your shoulders,” Carson said. “It is no one else’s fault if you don’t let your thoughts be known, good or bad. I like that part of the individuality. I like that my word can be heard no matter how big or small I am.”

Just as cooperatives have helped sustain families just like Carson’s for generations, taking care of the land is also an action that cannot be forgotten if agriculture is to make it for the long haul.

“You can look around the panhandle at third and fourth generations, and you know that those people were good stewards of what God blessed them with, and they got to hand that down,” Carson said. “I see a lot of satisfaction in knowing that if someone in my family chooses to keep this land, they will know that I have walked that dirt and I have plowed that soil. If my family doesn’t choose this direction, I hope someone else appreciates that I tried to be a good steward as they come along. This will be here long after all of us are gone, and I think that is a neat thing.”