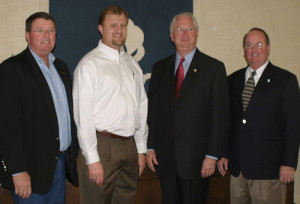 PCCA President and CEO Wally Darneille hosted Congressman Randy Neugebauer for a tour of the American Cotton Growers (ACG) denim mill in Littlefield, Texas, on October 21. Accompanying Mr. Neugebauer were his wife, Dana, and two members of his staff.

The tour was prompted by an initiative launched earlier this year by the National Council of Textile Organizations (NCTO) to acquaint members of Congress with their constituents involved in the textile industry and to discuss the impact of pending trade legislation. PCCA is a member of NCTO, and Wally Darneille serves on its board of directors.

“We felt it was very important for Congressman Neugebauer to see first-hand what we are doing in Littlefield because our employees there and many PCCA members live in his Congressional district,” Darneille explained. ‘We wanted him to fully understand the investment our members have in the denim mill and the impact of its payroll on the local economy.”

Upon arrival at ACG, Mr. Neugebauer and his entourage were greeted by PCCA management and the mills 30-year employees. Following brief presentations by Mr. Darneille and Bryan Gregory, PCCA’s vice president of textile manufacturing, Mr. Neugebauer commented on current activities in Washington, D.C., related to U.S. agriculture and the textile industry before beginning his tour of the facility.

Timing of the event proved important as Congress began consideration of a number of trade bills before adjourning for the year in early December. One of the bills, related to trade with Haiti, was opposed by NCTO and the National Cotton Council.

“I think his familiarity with ACG’s operations may have helped Congressman Neugebauer comprehend the potential adverse effect of the Haiti trade bill, Darneille said. He, along with Congressman Mike Conaway of Midland, Texas, and numerous textile-state representatives vigorously opposed inclusion of the Haiti bill in the overall trade package, but in the end it passed the House by a narrow margin on Dec. 8 and the Senate a few hours later. Perhaps more important is the fact that Mr. Neugebauer and our other supporters may have set the stage when the next Congress convenes to mitigate the impact of the Haiti trade bill before duty-free preferences for textile and apparel imports are granted, Darneille added.

“Congressmen Neugebauer and Conaway and their staffs have always listened to our thoughts and concerns,” Darneille continued, “and we sincerely appreciate the support they have given our industries.”