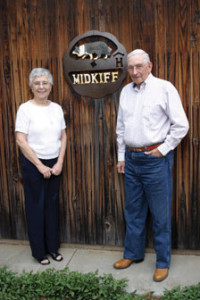 The enticement of the Oregon Trail lured Bob Midkiff into a life of exploration. The rallying call of “Head West, Young Man” found its way to his ears much later than it was first spoken as Bob and his wife Toni hit the dusty trail almost 150 years after the great migration to the West began.

As one of the forerunners of America’s westward expansion, the Oregon Trail was the pathway to the Pacific between 1841 and 1869 for fur traders, gold seekers, and families looking for a new and better life. Bob Midkiff is a descendant of one of those rough and ready pioneer families.

A member of Plains Cotton Cooperative Association, Bob owns a farm and ranch near Midkiff, Texas, a community named in honor of his family, located 30 miles south of Midland. He left the farm and moved to Midland to pursue a career as a Farm Bureau insurance agent, and 13 years later he opened his own independent agency while Toni worked in the home and raised their two children.

After their son Herd and daughter Kris were grown, Bob and Toni sold the insurance agency while keeping an interest in the family farming/ranching operations. In retirement, their interest in traveling grew faster than most of their crops.

The couple decided to follow the path of Bob’s great, great, great grandfather on the Oregon Trail. Just as his ancestors did, Bob and Toni began in Independence, Mo., and traveled west to Sacramento, Calif. Some trail ruts still can be seen today along the 3,000-mile trail. The deep grooves serve as vivid reminders of the sacrifices, struggles, and triumphs of early American travelers and settlers on the Oregon Trail. While following the tracks forged into the hard ground through eight states, Bob and Toni discovered their adventurous spirits.

“Once we passed through that many American states, I told Toni we might as well make them all,” Bob said with a smile. And they did.

The Midkiffs had no problem committing themselves to a project; after all, they have been married for 48 years. From 1993 to 2009, the Midkiffs visited all 50 states in the Union; they drove to each of the lower 48 states. Where possible, the couple avoided major highways, preferring to drive on smaller farm-to-market roads in order to enjoy more of the great American scenery and meet interesting people along the way. 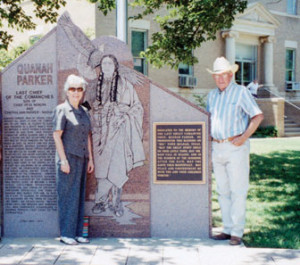 The Midkiffs pose in front of the Hardeman County courthouse (Quanah, Texas).

“The number of unforgettable people and places you can discover when you aren’t on the main highway is amazing,” Toni explained. “We liked to stop along the roadside and take photographs of the beautiful landscapes we found as we traveled.”

Not wanting to miss a thing, the couple attended a photography course at Midland College to learn valuable tips and tricks for capturing their travels on film. With the number of photographs piling up, the Midkiffs decided to have placemats made, one from each state they visited. The placemats now serve as great conversation starters at parties and family functions in their home, Bob explained.

“Although we saw some beautiful country, the more we traveled the more we were thankful to live in our great state,” Bob said. Toni wholeheartedly agreed.

In a lull between trips out of state, the Midkiffs decided the winding roads and wideopen spaces of Texas were calling. The couple resolved to visit all 254 counties in the Lone Star state. To give their travels an even greater purpose, they took photos of every courthouse in Texas. The project began in August 1993 and was completed in 1996.

An impressively organized lady, Toni placed the courthouse photos in individual white envelopes, labeled them with the corresponding county name, and carefully arranged over 10,000 miles of memories in a small white box. The envelopes were alphabetized for easy access, of course. Her spiral notebook containing orderly notes, personal impressions, and random thoughts from their travels now are kept alongside the box of photos.

An impressively organized lady, Toni placed the courthouse photos in individual white envelopes, labeled them with the corresponding county name, and carefully arranged over 10,000 miles of memories in a small white box. The envelopes were alphabetized for easy access, of course. Her spiral notebook containing orderly notes, personal impressions, and random thoughts from their travels now are kept alongside the box of photos.

“We like to spend our time visiting with our family, especially our grandson Robert Stephens, and traveling to see new and different things in the world,” Bob said as he turned the pages of one of Toni’s lovingly crafted photo books. “We enjoy ourselves,” he concluded.