“Don’t Do What Looks Good, Do What is Right.” – The Mandujano Brothers

Family. Hard Work. Dedication. Strong Values. The Mandujano brothers and their siblings were raised with these principles at the center of focus. Mando, Tony and Beto Mandujano, in Coyanosa, Texas, have a diversified farm in West Texas that allows them to not only raise crops, but their families as well. Along with producing cotton, they raise cattle, own a restaurant/store, and grow onions, watermelon, cantaloupe, pumpkins, alfalfa, and hay. Their farming operation is deeply rooted in family values as the Mandujano brothers try to live by the foundation of morals and hard work created by their parents, Alvaro and Cecilia Mandujano.

Tony said farming runs deep in his family’s heritage. He said his grandparents farmed in Mexico and when his dad came to the United States that is what he wanted 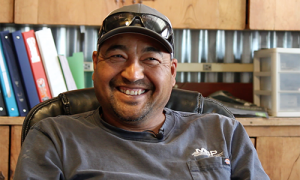 to do. In 1977, Alvaro moved his family to Coyanosa to take advantage of an opportunity to work for a farmer. Later, he had the chance to buy land of his own and begin building his business. In 1993, three of the 11 siblings formed a farming partnership, Mandujano Brothers, around the time they graduated from Angelo State University. They have since grown their operation into what it is today covering thousands of acres of land. Tony said without their parents they would not be where they are today.

“My dad has always said if you can help somebody, them help somebody,” Tony said. “Be fair. Don’t do what looks good, do what is right. That is what we always try to do, we always try to be fair to our employees and customers. Believe it or not, there might be times that we are wrong and if we are wrong we will admit it. Hopefully, I will teach that to my kids, to be fair and don’t try to make a dollar. Do what is right and at the end of the day you are going to be better off.”

Mando agreed with his brother, Tony, and said their parents were very honest and tried to raise them right. 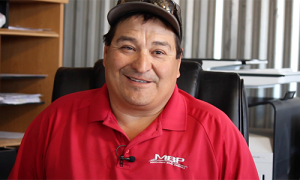 “None of us fell too far off the deep end,” Mando said. “Mom and Dad, it was always really important to them for us to learn how to work. We grew up as kids working on the farm at a very young age and that is part of the reason we love it. Nowadays, there is a lot of work still and Mom says, ‘Son you are working too hard, don’t work too much,’ and it’s like I told her, I said, ‘Mom you taught us this,’ and she said ‘Well I wish I wouldn’t have been so hard on you.’ But there are no regrets from me. I love what I do and I love what they taught me.”

The Mandujano brothers work well together. Each plays their own role in making sure every aspect of the operation runs smoothly. They have around 20 full-time employees and employ between 130-150 people during harvest depending on the year. Mando said they not only enjoy working with family each day, but they also have a deep love for farming.

Tony echoed Mando’s comments and said being happy is the most important thing.

“Well you know, it is a lot of hard work, but there are a lot of rewards to it,” Tony said. “You get to make your own schedule and see the progress. A lot of times people look at it and say, ‘These poor guys, they are doing this and doing that,’ but everybody has to do something. As long as you are happy and enjoy what you are doing, and make a little profit, that is even better.

“We have to manage and plan for the following season because we are basically planting all year long,” Mando said. “We start planting in September and every two weeks we are seeding onions until February. Shortly after that we are seeding melons and it is every two or three weeks we are seeding. Of course, the cotton window is really short. It is mid-May to early June and then we are done, but we start up with the fall melon and the pumpkin programs. It is kind of interesting.”

Out of all the crops they grow, each brother has their favorite. Tony said he enjoys onions because they are only harvested once, while Mando said his favorite would have to be watermelon.

“I get a little excited about the onions and cantaloupe, but I like the marketing side of the watermelons a little better,” Mando said. “We have a lot of good, higher-end customers such as Kroger, Walmart, HEB, Safeway, United and Albertsons. So, I personally like the melon a little better. Onions are really demanding because you harvest it one time and you are done, but it is a big one time, whereas melons are a little more forgiving if you get behind. You don’t have to harvest everything at one time. There are pros and cons to everything and I would consider that a pro. And, of course to eat too, melons are my favorite.”

There are ups and downs to farming, but Tony said to him being sustainable is making it through each and coming out on the other side.

“Sustainability to me would be saying there are going to be some tough years, some bad years, but you have to be able to hang on so when the good years come you are ready to go,” Tony said. “Most of these farms that we farm, we grew up planting onions in them for wages, picking cantaloupes and doing all that, so we know the farms inside-out. I tell people there is no such thing as luck. Luck is when opportunity meets preparation. You have to be prepared. Sometimes you have a rough year and sometimes you have a good year, and just because you had a good year doesn’t mean it is going to be like that every year.”

Mando said he enjoys having his family close and getting to farm with his brothers and parents each year. He also said he loves seeing his daughter grow up in agriculture.

“I only have one little girl and she says she is going to be a farmer when she grows up,” Mando said. “She loves animals, she loves going out to see the crops once they are done. She especially loves the vegetables. She gets excited about the little baby melons and all that. She is a little young right now and I’m not sure which way she is going to go. If she wants to be a farmer that would tickle me to death, but if she doesn’t, of course that would suit me fine too.”

Surrounded by the fruits of their labor and the love of their family, for the Mandujano brothers the cantaloupes they grow aren’t the only thing that makes their life sweet.