The trend of cooperative mergers, designed to provide improved services and greater earnings potential for their patrons, has continued during the past 12 months as Farmers Cooperative Compress joined forces with Plainview Cooperative Compress in West Texas while Gulf and Delta Compresses combined operations in South Texas. A combination of factors, ranging from recent management changes, to declining government farm program payments necessitating greater profitability at the farm and coop level, played key roles in the mergers. In other words, the time was right for the compresses involved in the two mergers.

“A merger with Plainview Cooperative Compress (PCC) had been in the back of our minds for some time,” says R.D. McCallister, chairman of the board of Farmers Cooperative Compress (FCC). “We began talking about it a couple of years ago with no results,” he adds, “then our manager, Rex McKinney, announced his plans to retire, and both compresses decided it was a good time to give the issue serious consideration.”

The boards of both compresses delegated their respective executive committees to explore the possibility of merging. They quickly learned that both cooperatives were quite similar: the retirement schedules of book credits were equal; neither coop was in financial difficulty; and potential savings resulting in greater patronage dividends were significant, according to McCallister.

Martin Schur, chairman of the board of PCC when the merger was approved, agrees with McCallister. “This merger is going to make more money for the patrons of this new cooperative compress,” Schur explains. “Both organizations have had a good image and reputation among the merchants and the textile mills. All of this is why the merger is such a good fit,” he adds. “This merger can’t be anything but good. I’ve gone through two mergers since 1980 as a member of United Farm Industries (coop gin), and they’ve always worked real good.”

“The past few years, we’ve had to put as much as 30 percent of our cotton on the yard due to increased cotton acreage in our territory,” Schur explains. “Now, we can send our yard cotton to FCC in Lubbock if that is the most economical alternative.”

“Here at FCC, much of our cotton comes from dryland areas which are much more susceptible to drouth,” adds McCallister. “A lot of cotton from the Plainview area is irrigated, so the merger should help stabilize receipts for the new coop.”

The FCC/PCC merger became effective July 1, 1997, and no money was borrowed to complete the process. Members’ equities in both cooperatives were combined and should remain on a three-year retirement cycle. The executive committee at FCC will add two members from the Plainview area, a total of nine members, and each coop gin will continue to elect one member to the new coop compress board.

Incentives behind the Gulf and Delta compresses’ merger, completed in 1996, were much the same as those for FCC and PCC. In fact, the merger there came at a critical time when many gin communities experienced extremely short crops that year.

“If it hadn’t been for our regionals like the compress, a lot of us wouldn’t be here in 1997,” says Bayside-Richardson Coop Gin Manager David Wyatt. “The regionals’ patronage dividends last year helped many of us show a profit,” he continues.

“We discussed a merger with Delta for several years, but there never was much interest among members of either compress’ boards,” explains Durwood Boenig, a cotton producer in the Bayside community and a member of the Gulf Compress board for more than 10 years. “Finally, Gulf formed a study committee which concluded a merger was a good idea. We were committed to equal treatment for everyone, and we set out to prove our intent was good to the members of Delta Compress,” Boenig says. 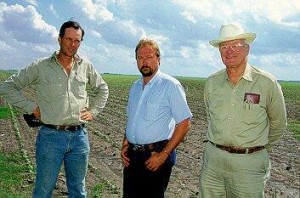 Delta members’ equities were handled fairly, the manager there was retained to be manager of the Delta division in Raymondville, the Gulf Board of Directors was increased to provide representation for Rio Grande Valley growers, and Delta Compress facilities were upgraded.

“I felt like volume was the primary incentive for our merger,” says Gary Busse, a member of Lyford Coop Gin south of Raymondville. “We also wanted to protect our stock in our coops,” he adds.

“Our merger occurred before there was a crisis,” notes Lyford Coop member John Whitfield. “Everything fit, and I haven’t heard any complaints. As mergers go, there really wasn’t any fallout.”

The Gulf/Delta merger also should help keep transportation costs down, take full advantage of crop diversity among the Coastal Bend and Rio Grande Valley areas, and maximize the market potential for Texas cotton in Mexico.

After decades of providing quality service at the lowest possible cost and paying important dividends to their respective patrons, the four former coop compresses have positioned themselves to meet the challenges of the future as two organizations. Based on comments from many cotton producers, there is little doubt that their cooperatives will continue to be an important part of their farming operations.