From Humble Beginnings, Kansas Cotton Stakes its Place in the U.S. Cotton Industry

Like many of his fellow Texans, Gene Latham believed cotton could not be grown in Kansas, but once he visited with farmers there in 1999, he quickly changed his mind. Since then, he has witnessed and contributed to the phenomenal growth of the Kansas cotton industry.

Latham grew up on a dryland cotton farm near Paducah, Texas, and became interested in cotton and insects through 4-H. After high school, he enrolled at Texas A&M University to study entomology.

“It was the only school in Texas that had an entomology department at that time,” Latham explained. “I was in the corps, so after I graduated with my bachelor’s degree I served four years in the U.S. Army flying helicopters in Vietnam until I was wounded,” he said. 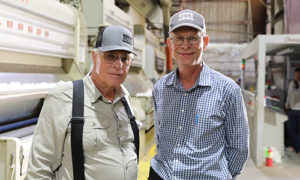 Following his service, Latham returned to Texas A&M to get a master’s degree in entomology. After graduate school, Latham accepted a position in Hale County, Texas, running a grain sorghum pest management program for the Texas Agricultural Extension Service.

“Of course, cotton was still my love, so I started working with cotton, corn, sunflowers, and grain sorghum,” he explained.

After four years with the extension service, Latham became a private consultant working primarily with cotton and corn. To supplement his income and have something to do during the winter months, he began working in the office at Edmonson Co-op Gin in the fall of 1976. Five years later, he became the co-op’s manager while continuing his entomology consulting after hours and on weekends. In 1993, Latham began a six-year stint as manager of Hale Center Co-op Gin.

“By 1999, small gins were consolidating with larger gins, and there were more managers than gins. I was wondering what I was going to do until Dick Cooper at PCCA suggested I take a look at Kansas,” he recalled. “I was somewhat skeptical, but I agreed to meet with the board of directors of Southern Kansas Cotton Growers, a co-op gin at Winfield. I was taking my granddaughter back home to Minnesota and would be driving through Kansas, anyway.”

The SKCG Board was looking for someone to manage the gin and help farmers grow cotton. With his management experience in Texas and expertise in entomology, Latham was the perfect candidate. He also realized the lush vegetation in Kansas provided habitat for “bothersome pests” including thrips, cotton fleahoppers, tarnished plant bugs and bollworms to name a few.

“I agreed to stay five years, then return to Texas,” Latham explained.

That was in 1999, and he still lives in Winfield, Kansas, and is still amazed by the growth of the state’s cotton production.

“When I arrived in 2000, we rebuilt the gin and started ginning cotton in October,” he added. “I also started a program where we were checking cotton fields for pests. My effort has always been to help the producers that own this co-op because without producers, you don’t have a co-op.”

That first year as he sat at his desk reviewing the first 4,000 grades through the system, Latham realized all of them were premium micronaire.

“Conventional wisdom is you don’t grow premium mic with short season varieties,” he said, “so I started looking at different varieties to recommend to our producers.”

Latham also soon realized he needed someone to run the pest management program for the co-op when he heard about Rex Friesen, a native of central California with a Ph.D. in population biology, an interdisciplinary program that involved entomology. Like Latham, Friesen had developed a love for cotton and entomology and was working as an integrated pest management agent in southwest Texas.

“My wife is from Kansas, and her father was a Kansas farmer,” Friesen said. “He would send us newspaper articles anytime cotton appeared in them. Over the years, I told my wife if there ever was a job in cotton in Kansas we would go.”

When Latham offered him a job at SKCG, the decision was easy.

“I think my position is unique, and I can credit Gene for bringing me in here because I think it was truly revolutionary,” Friesen said. “To have their own entomologist, agronomist or whatever in house that is dedicated to the producers is a significant asset. So, we spent a lot of time beating the bushes trying to convince people to try growing cotton. We had to do a lot of promotion and held a lot of grower meetings, doing everything we could to convince them to at least try it.”

“My effort has always been to help the producers that own this co-op because without producers, you don’t have a co-op.”

In addition to the information meetings, one of the first things Friesen did at SKCG was review 50 years of weather data which showed an average of 100 heat units per year more than Lubbock, Texas, and twice the rainfall.

“You don’t have to be a genius to figure out that if you have more heat units than the cotton capitol of the world and you get twice the rainfall, you can grow cotton,” Latham said with a big smile. “We started out hoping for a bale per acre, and now we are disappointed with anything under two bales.”

For the 2018 crop year, SKCG farmers averaged almost 2.5 bales per acre on dryland production, according to Latham. He also noted the co-op delivered the most bales, more than 163,000, to PCCA warehouses from the 2018 crop year.

Many farmers in the Winfield area utilize no-till cultivation with cotton as part of their crop rotation because it makes other crops better.

“I think our cotton growers are the progressive farmers of Kansas,” Friesen added. “They’re cutting edge to grow dryland, no-till cotton which is ahead of the game for so many. They have also told me their neighbors thought they were crazy.”

“Most of the cotton fields that are harvested today will be planted in wheat tomorrow,” Latham said, “and the wheat will average 10 more bushels per acre when it follows cotton.”

After eight years as SKCG’s manager, Latham decided to take a step back and spend his time as a private crop consultant for a group of farmers he considers friends.

“I help them grow cotton,” he said, “but other farmers know to call me for help or advice whether I work for them or not.”

Like Latham, Friesen has made some transitions in his role at SKCG.

“I was originally hired by Gene to come up here and run a scouting program,” Friesen explained. “What I initially did was train scouts and put them out in the field to look for insects and weeds. They would report back to me, and I would make recommendations to the farmers. I don’t remember how long we did that, maybe six or seven years. Today, I am kind of a consultant-at-large and not responsible for anybody’s particular acres which makes me a better asset for the gin.”

Friesen added, however, that he will visit any farmer’s field if called on, and he publishes a newsletter to alert farmers of any problems or issues in their fields. He also serves as SKCG’s public relations representative which means he gets to work with many farmers and the general public, a role he said he really enjoys. On any given day, Friesen may be at a meeting in Topeka, working with Ag in the Classroom or working at the Kansas State Fair promoting cotton and educating the public about cotton and giving gin tours.

Meanwhile, Friesen and Latham continue to work as a team to help cotton farmers in south central Kansas succeed. Both are quick to point out the area’s environment, weather-wise, presents many challenges. There have been other challenges, too.

“I think a lot of it is helping farmers change their mindset about other crops that are low maintenance, low management and low input to a crop like cotton that is just the opposite,” Friesen explained. “It is management intensive, expensive and somewhat risky. I tell them cotton is a headache to grow, but when they get their checks the headache usually goes away. I try not to candy-coat anything when I talk to farmers about cotton so they know exactly what they are getting into. Now, we can look back and say we have some guys than can grow cotton as well as anybody can.”

Latham and Friesen also have their eyes on the future.

“I’m getting old, and some of these farmers are wondering what they are going to do for a consultant when I am gone,” Latham said. “So, we are working with Cowley County Community College’s agriculture department to make sure they have cotton in their curriculum.”

They also are working with current consultants to educate them about cotton and give them good advice. Friesen also is encouraged by the number of young farmers in the area.

“Over the years, I have seen a good number of farmers’ kids that have returned from college with degrees in agronomy or agricultural business and want to farm,” Friesen said. “There are a lot of good guys and gals coming up that want to farm and are bringing new blood, new ideas and new enthusiasm to the ag industry. I don’t know what it is like in other places, but we have some really good young farmers coming up.”

“With the good soil we have and the high rainfall areas, we are going to see more and more cotton grown in Kansas,” Latham said.

Farmers there currently are served by four co-op gins that have increased their capacity.

“We are still upgrading our gins so we can handle this potential for the tremendous increase in planted acres in the coming years,” Friesen added. “It is really an exciting place to be. The ride is not over with yet, and I’m glad I have been here long enough to see it grow.”

Neither man appears ready to leave Kansas any time soon.

“I still have a pretty dear place in my heart for SKCG, and PCCA was a big part of my life for a long time,” Latham explained. “I didn’t intend to be a gin manager, it just happened.” Latham also credits PCCA for the advent and growth of cotton production in Kansas.

“Cotton wouldn’t be in Kansas without PCCA,” he said. “The marketing services provided by PCCA, especially the marketing pool, has been so beneficial to our farmers. They don’t have to worry about selling their cotton, and the dividends paid by PCCA and the co-op gins here make a lot of difference,” Latham continued. “So, it’s pretty obvious I’m a PCCA man, a co-op guy. I miss Texas and my friends there, but like I tell people my granddaughters are in Minnesota so I’m 500 miles closer to them than I was in Texas.”

“As far as I can tell, it is just the best way of doing business,” Friesen said. “The co-op is owned by the farmers, and that is pretty crucial. It gives them a stake in the game, and they get the benefits and the dividends at the end of the year.” When asked about his fondest memory at SKCG, he said “I don’t know that I could nail it down to just one because it has been a journey, and I have really enjoyed it.”