The Story of Johnny and Janney Anderson 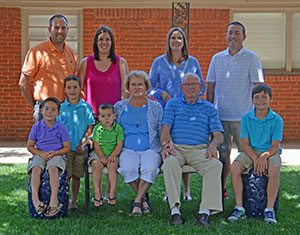 Considered a dynamic duo in the South Plains cotton industry, the Andersons have served the area’s producers and coop gins with an unmatched level of commitment. Since day one, their eyes have been set on the producers when they aren’t lovingly looking at each other. Both Johnny’s and Janney’s dedication to the industry remains constant and dependable even after 1.5 million miles of travel, years of service and countless memories made.

Johnny was born into a cotton farming family and raised in O’Donnell, Texas. He is an alumnus of South Plains College in Levelland, Texas. Janney was born and raised in Lubbock, Texas, where her father worked in construction, and she attended Draughan’s Business College.

The term “young love” is certainly applicable when describing how the couple met. Before their story began, Janney graduated from Lubbock High and Johnny graduated from O’Donnell ISD. While Janney was in college she met Johnny, who was working at Jim Taylor Motor Company, through a mutual friend. They fell in love in the spring, married in the fall, and moved to O’Donnell, Texas, the following January. Today, the couple has been married for 45 years and will celebrate their anniversary in September. The Andersons have two children, Shawn Anderson and Sha’Lyn Moore, and four grandsons.

Janney has worked both in and outside of agriculture. Prior to her current job at Slaton Coop Gin, she worked as a legal secretary in Tahoka, Texas, a city tax assessor and judge in O’Donnell, and later a part time bookkeeper at Farmer’s Coop Gin in O’Donnell. In 1983, she took a full time bookkeeping position at the same gin.

Janney began working at the Slaton Coop Gin in 2003 and said she has enjoyed every minute of it.

“Ninety-nine percent of the people are great to work with,” she said. “That goes from the manager to the employees you have to the producers.”

Prior to his current position in the industry, Johnny worked in other areas of agriculture. He farmed roughly 2,000 acres of dryland cotton in O’Donnell with his father, and in 1971, went to work for the High Plains Boll Weevil Program. In 1986, Johnny accepted a field representative position at Plains Cotton Growers where he still works today.

Commenting on his current position with PCG, Johnny said, “I go around and keep the gins informed on what PCG is doing. As far as I’m concerned, it has been the best thing that has ever happened to me.”

Speaking from their rich experiences, the Andersons said the cotton industry and its people create a working environment unlike any other.

“If you think about it, gins are like coffee shops,” Johnny said. “That is where producers are going to meet and shoot the bull and tell a few lies or stretch the truth, you know. It’s really not an eight to five job; it’s a 15-hour a day job then go to a meeting.”

“It’s a different business world. In the cotton industry there is just a different breed of people,” Janney said. “I have had a few incidents in my life where the farmers have come to my rescue and made me feel good. They have always supported me.”

“Johnny and I being farmers, we also relate,” Janney said. “We see what they face every day, and it is definitely a benefit for us to understand what happens in the industry all the way around, from Washington to the cotton gin.”

Mary Jane Buerkle, PCG’s Director of Communications and Public Affairs, said the Andersons’ multi-faceted involvement in agriculture helps them relate to others on a deeper level than business.

“They can really empathize with people and at the same time help them understand so many of the things we are dealing with,” she said.

Other than farmers, the couple has touched the hearts of their co-workers as well. Buerkle, said, “Johnny and Janney’s longtime dedication is an inspiration to anyone who shares their passion for the industry. I look to both of them for guidance and advice.”

The success of the members of PCG and Slaton Coop largely depend on Johnny and Janney so much so that their work is more than just earning a living, but rather a way of life. From their blood relatives
to those related to them in agriculture, the Andersons enjoy seeing others succeed and find great responsibility in serving them.

“My favorite part of my job is working with the farmers,” Janney said. “I like to see the farmer succeed, and part of him succeeding is me being able to market his cotton and take care of his books. I like them to have the confidence that I can take care of their business when they are out harvesting their cotton.”

Johnny agreed. “I don’t know if people would believe me, but after 30 years, I don’t know that I have woke up one morning and not wanted to go to work,” he said. “We are a family. People don’t come and go, they come and stay, and you take care of the people that support you.”

Buerkle said the Andersons are well known for their continual hard work and big hearts; both of which make them a vital asset to the cotton industry and their respective employers.

“Johnny and Janney, both together and as individuals, have given so much to the Texas High Plains cotton industry,” Buerkle said. “Between the two of them, they know everyone – but those relationships go well beyond the surface, as they are extremely respected throughout the industry.”

Johnny and Janney Anderson have built up a legacy that will last long after their time in the industry is through. Speaking on behalf of their future, they both see retirement, but more than that, a chance to travel, spend more time with family and friends, and lovingly gaze into each others eyes as they always have.

“Anyone who has had the opportunity to know them certainly is better for it,” Buerkle said. “You can tell that they both truly love what they do.”

Without a doubt, the Anderson’s love for each other has transformed into a love for the world of cotton and the people in its fields. Their unsurpassed dedication to the industry has written a story that will be shared by many for years to come.