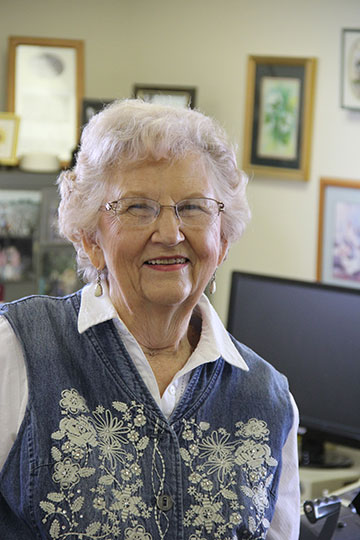 La Feria Co-op Gin in the Lower Rio Grande Valley was founded in 1950 by farmers who came together for a common purpose. While the gin has faced adversities over the years, one thing has remained constant and true – Rita Schreiber. As the office manager, she has been a beacon to the co-op’s grower-owners. To this day, anyone who enters the gin office will leave with their day a little brighter. Her passion, attitude and love are contagious to all who cross her path.

Ed Landry, La Feria Co-op Gin Manager, who has worked with Schreiber for around 30 years, said she is a vital part of the gin and the community.

“I think the fact that she is just here every day and available to the people if they want to come talk to her,” Landry said. “I think people in the community respect her and her family.”

Schreiber began part-time at the gin during the summer while attending high school. After high school, she went to college and obtained a business degree. Following college, Schreiber taught school for a while.

“After college I taught in Harlingen at a Catholic school,” Schreiber said. “I taught at a rural school in Santa Maria and then went back to work at the gin part-time. In 1960, the manager took another job, and the board wanted somebody to sit there, so I sat there, and I am still sitting here.”

Even after all of these years, Schreiber still looks forward to coming to work every day. She said she is often asked if she gets tired of doing the same thing every day.

“I say no because there are no two years that are the same,” Schreiber said. “Every year is different. There have been changes to the way you market cotton, which now we do it through PCCA, but at one time we had to do it by hand. Everything was written in the bale books by hand, and I hired my nieces that were in college and other high school girls to help them get summer jobs.” Landry said Schreiber helps keep him on the right path.

“She is conservative, and you always know that her job is going to get done,” Landry said. “You may have to worry about other areas, but you don’t have to worry about that area. You know it is going to be done right. She may drive you crazy looking for that last penny, but she wants to know where it’s at. She is a real pleasure to work with.”

Former La Feria Gin Manager and producer, Steve Lievens, said Schreiber made his job easier and taught him a lot about cooperatives.

“A lot of times when I was not here, I could depend on Rita and her staff to take charge,” Lievens said. “I never had any doubts at all whether I was out of town or if I had gone into town for a small errand, if someone came in and they wanted to know something, Rita could answer it. She was my right-hand person and she is the best ambassador that La Feria Co-op could have.”

Schreiber said she has always had an interest in cooperatives and enjoys working for one because it truly is the farmers’ business.

“My favorite part of working here is visiting with the farmers and dealing with all of the challenges,” Schreiber said. “It is their business, and they get their money from ginning here. Some don’t understand that it is not privately owned. They own the gin, and they get dividends, and they get good pay if we have a good year.” Lievens also believes in the cooperative model.

“I think farmers should be members of co-ops because you can build anything here at the co-op,” Lievens said. “They are good for the community, too. I think co-ops are strong and will survive down here. When they are run properly, there is no end to what they can do.”

One of the biggest adversities La Feria Co-op has faced was moving the gin from inside town in 1991. Schreiber said as the town grew around the gin, the dirt from the gin became a problem. 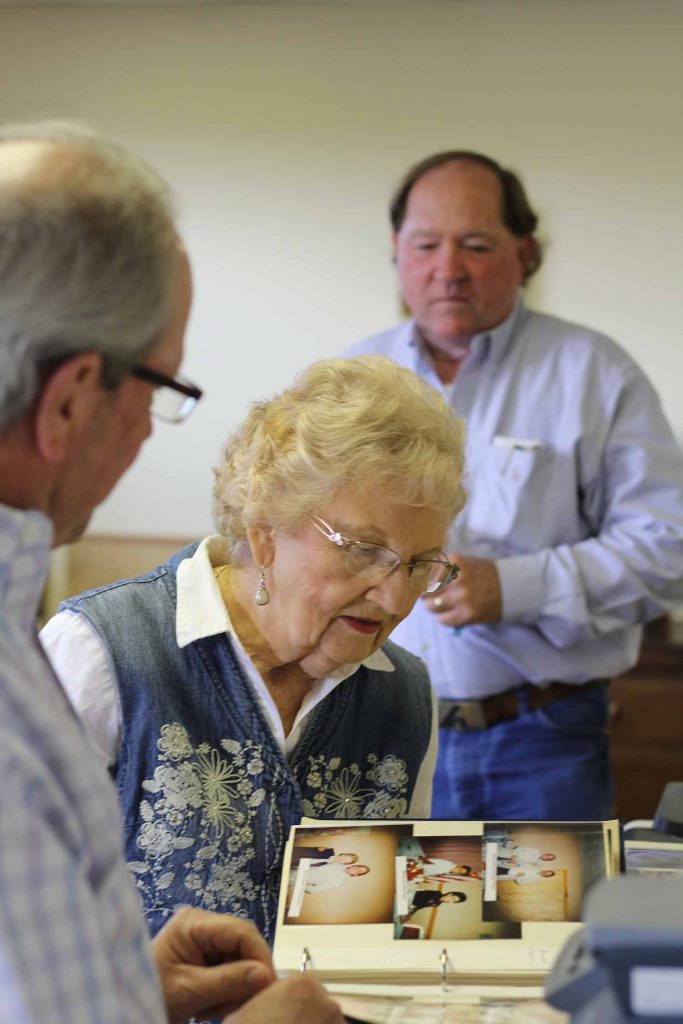 Ed Landry and Steve Lievens look on and reminise about their times at La Feria Co-op as Rita thumbs through the pages of an old photo album.

“When they took the press out of the old gin and moved it to this gin, it was a really exciting time,” Schreiber said. “It was the only part they moved. They had to bring the press about five miles out here, and that press is still in the gin.” Landry said after building the new gin, the co-op faced some challenging crop years.

“About four years into the gin project, we had the big army worm disaster,” Landry said. “That year, we thought we would gin about 20,000 bales, and we only ginned about 2,000. That was true for most any gin in the valley. We had to get past that, and in 2008 we had to get through the hurricane year.”

Schreiber knows all too well the challenges farmers face year after year. She grew up on a farm.

“My dad ginned cotton there, and I went with him to the gin many times,” Schreiber said. “So, it has been kind of a community or family. My family still farms and they bring their cotton here. They are very cooperative minded.”

While she knows she cannot do much to change the circumstances farmers face in difficult years, Schreiber tries to encourage her farmers whenever she can.

“Just have faith and just keep at it,” Schreiber said. “I don’t know how to encourage them, but they have to have faith in the Lord and it works out. Continue hoping for another big year.”