The “Why” Behind The Need

We want you to share your story. We need you to share your story. Please, share your story! While all of these statements are flattering, they lack explanation. What does it mean when we ask those in agriculture to share their stories? Is providing a play-by-play of farming operations enough? Do they really want to hear about my multi-generational farming family, my no- till operation, this old horse-drawn plow sitting out behind the barn that my great-grandfather used? Do people really care? Should I let people into my life in this way even if I am skeptical?

The answer to all of these questions is yes. Why we ask grower-owners to share their stories stems from one major reason: If you do not tell your story, someone else will tell it for you – possibly in the wrong way. As agriculturists, we get flustered when our industry is misrepresented or spoken poorly of in the media. So, then, why should we give those misrepresenting our industry the upper hand? Why would we not share our story in the right way first?

WHAT DOES “SHARING YOUR STORY” MEAN?

Associate Professor and Graduate Studies Coordinator for the Department of Agricultural Education and Communications at Texas Tech University, Courtney Meyers, Ph.D., has made a career out of teaching students to share their agricultural stories, as well as how to share those stories for others.

“If I am asking someone to share their story,” she said, “I am asking them to let their guard down and to provide something on a personal level that will connect to others. The most effective storytelling techniques deal with connecting with shared values, with things we know and appreciate, whether that be family, tradition, or a can-do attitude, the American spirit, whatever those things are. So, typically, when I ask someone to share their story, it is because there is something about the story that other people will resonate with or connect with and that might help them get a better understanding of a bigger picture.”

Telling others about personal experiences is a tale as old as time. From Biblical times when parables were major teaching tools to Native American cultures who did the same, there is a reason stories exist as opposed to only facts and figures.

Many options are available when it comes to sharing your story with others. From candid social media posts to more polished magazine stories, anything is possible. Sharing your story might indicate an action as simple as posting a farming photo to Facebook or as agreeing to sit down for a media interview.

“In terms of what many agriculturists have to do day-in and day-out,” Meyers said, “they don’t have the time to invest in a strategic plan. However, they might have time to put together a Snapchat video or put something on Facebook that updates what they are doing that day. The low point of entry for social media would allow them to quickly and relatively easily build the network of people both within and outside of agriculture that are curious about what they are doing.”

In essence, you can tell your story alone, or if you prefer, you can enlist someone else, a trusted source, to tell it for you. Meyers said effective interviewing methods are something agricultural communications professors work to instill in their students every day so the correct story is told to its fullest extent. This helps ensure future agricultural communicators, who may go on to work for commodity organizations and in other fields, will have the necessary skillset to accurately represent the two percent of Americans involved in the production of food and fiber. One way to identify a source worthy of sharing your story is not if, but how they listen to you.

“One of the most important roles of an agricultural communicator engaged with helping tell people’s stories is listening,” she said. “We often listen with the intent to reply and not with the intent to understand, so one of the things we want to develop in our students is effective interviewing techniques. That doesn’t just mean the questions you ask, it means how you sit through an interview and be actively engaged and listen so that you can, when necessary, draw out additional details or additional responses.”

Now that you have some options for telling others about your experiences, try not to let fear get in the way. Take a step back and do a quick self-evaluation, briefly setting humility aside. You are unique. You do have a special story – even if you think differently.

“I think it is easy to judge for ourselves whether or not our lives are interesting, and usually the answer is no because we are in the mundane existence of them,” Meyers said. “However, there are many people who are very curious about what happens in agriculture, specifically on your farm or ranch that would find it fascinating because it is so different from what their day-to-day life is like.”

ONE STEP AT A TIME

Now that you know why and where you can share your story, see Meyers’ recommended steps to realizing you have a story to tell.

Reflect. Take a moment to reflect on your lifetime, your parents’ and grandparents’ lifetimes – were there any significant events? How long has your family been farming? What are some of the hardships you have faced and overcome?

“I can fondly remember many stories about my grandma and the adventures she had growing up on the farm before running water and electricity in the home,” Meyers said.

She said these stories were memorable because they were about her grandmother overcoming obstacles and hardships.

As our brains can only contain so much information at a given point in time, using photos to bring back long-forgotten memories is another valuable reflection method. As Meyers said, people love visuals.

“We have all heard the saying, ‘A picture is worth a thousand words,’ and there is a reason for that,” she said.

Meyers suggested finding some ‘then and now’ pictures of your farm to “show how well your farm has been sustained over time, the stewardship, the time that you have invested in protecting your farm.”

Using these photos helps you reminisce on prior experiences and tell “the heritage of your farm’s story.”

Find the humor. At times, light-hearted and funny stories can be just as effective as those that are more heartfelt. After all, a smile and laugh are good for the soul too.

“There might be other stories that you really enjoy because they are funny and connect with people at that humorous level,” Meyers said. “We know that funny things happen in agriculture, whether it be getting a tractor stuck in some who-knows-how way, or it could have been dealing with animals, but usually humor will connect people.”

“Again, thinking back on the stories that my grandma would tell growing up in the Great Depression and how they were able to survive with the farm they had – those are questions she honestly would never have talked about if we weren’t nosy kids wanting to know more information,” Meyers said. “So, it might be putting yourself in the role of ‘What are some things people might be curious about?’ and realizing you do have a story to share.”

Now that you have more insight on the “why” behind the need in sharing your agricultural story, take action. Share a photo on Facebook or Instagram, write a post about your most recent comical experience on Twitter, or even make a Snapchat video. If nothing else, tell your neighbor about what happened in the field yesterday. When the waitress at the restaurant notices your dirty boots and jeans, take it as an opportunity to explain that you work to feed and clothe the nation. Opportunities for sharing your story are everywhere, you just have to recognize them.

“I would say don’t over-analyze or over-critique the stories you have to share,” Meyers said. “Instead, just start sharing them and see what the natural response is to those stories.”

If you have a story you would like to share or know of someone with a story worthy of telling, we can help. Call the PCCA Communications Department at 806-763-8011. 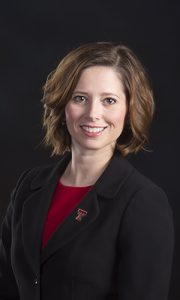 A native of Fulton, Kansas, Courtney Meyers, Ph.D., has always been part of two things: agriculture and communications. With parents who were English teachers and grandparents who farmed soybeans and milo, she said she came into the agricultural communications profession naturally.

“I majored in agricultural communications from the time someone said, ‘Do you like math or writing better?’ and I picked writing,” Meyers said.

While earning her bachelor’s degree from the College of Agriculture at Kansas State University, Meyers worked as the communications specialist for the International Grains Program at the same institution. It was there she learned about the global aspects of agriculture and how much was possible in the field, which led her to earn her master’s degree from the University of Arkansas and later her doctorate from the University of Florida. She joined the Texas Tech faculty in the fall of 2008. Earning degrees from universities in three different states also provided the Kansas native with the opportunity to experience agriculture in different regions.

“I learned through my own experience in moving states that what was a common practice in one state in terms of agriculture was not something that another state or people in that area had needed to know,” she said. “In agriculture, we face that struggle about what information do people really need to know, and then how do we provide that information.”

At Texas Tech University in the College of Agricultural Sciences and Natural Resources, Meyers teaches web design and public relations writing, better identified as “communicating agriculture to the public”, at the undergraduate level. She said she enjoys teaching students technical communications skills while helping them understand and realize the complex nature of agriculture and how important effective communication about it is.

“In my time as a professor, I have seen a change, rapid change, in who can become a source of information,” Meyers said. “No longer do those in agriculture have to wait for, or put forth a lot of effort, to get their message across. They can become their own authors, their own editors, their own producers and provide that information online through websites or through the various social media tools we have.”

“We know that consumers have a degrading trust in science, so not just in agriculture, but in all areas,” Meyers said. “That is troubling because the only way we are going to address many of the future challenges facing agriculture and the other industries is probably through increasing science and technology and engineering, so we need to address this lack of trust in scientists and this broader trend that people have degrading knowledge in science literacy. It is not just an agriculture problem, it applies to other aspects.”

“We have become so effective and so efficient in the agricultural industry that we need fewer people directly engaged – and that is a good thing, but it has led to this generation of people who are three, four, five generations removed from the farm,” she said. “That trend is not going to change. We have to and we are beginning to, over the past decade, start to re-examine the role of agricultural communications in that it may not be communicating amongst the two percent who are actively engaged, it may be helping those two percent engage with those not in agriculture.”