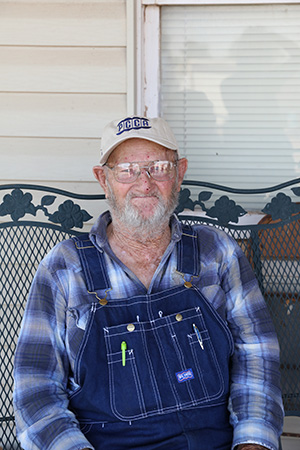 For Ira Mitchell Johnson Jr. these two things go hand-in-hand. He enlisted when he was 18 years old and served in the Army under General George S. Patton during World War II.

“I never did get to see him, but he kept us busy day and night,” Johnson said. “We would hit them on one front during the day and then at night we would move out and hit them on another front until they were tore up and didn’t know what they were doing. He [General Patton] was smarter, and he had more men to work with. You need to hit the enemy the fastest with the most. That is what I learned, and you know, that applies to farming and everything else. You have to get out there and have it done quick and fast and then you move on to another job.”

After serving in the Army for two and a half years, Johnson returned home to farm. At the age of 91 Johnson still manages his 2,600-acre farming operation in Southwest Oklahoma today. He said he primarily grows cotton and is farming more land than ever before with less help.

“It’s all I know. I started farming when I got out of the army in 1945 and I have been farming ever since,” Johnson said.” I bought my first farm of 80 acres for $1,385. Dad bought one for $2,000 at a county courthouse sale. That is the kind of farming I started with. On this first farm, it had places on it where you couldn’t drive with a tractor except from one side.”

Growing up in the Great Depression, Johnson said he learned many valuable lessons about life and farming from his parents. He said his dad was a very good farmer. 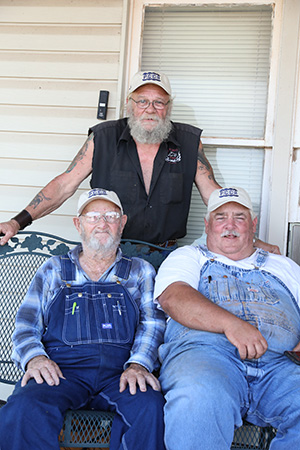 Johnson with his son, Terry, and his grandson-in-law, Jimmy Rhoades.

“He helped organize this part of the country and we bought a lot of sorry land that we built up and made good land. It is the little things that make the big things,” Johnson said. “You need to do a super good job no matter what you are doing. You need a cover crop on your land all the time. My daddy taught me that when I was just a boy. See, I grew up during the depression when we didn’t have anything to eat.”

After farming for 72 years and living in the home he bought for $5,000 in 1954, Johnson shared the secret to his success and happiness.

“First advice is to not buy a lot of machinery,” Johnson said. “Buy what you have to have and that is all. After my first 20 years of farming, I worked in the shop mostly. The factory job on the equipment wasn’t quite adequate. If you want to make a living farming you need to work 12 hours a day, six or seven days a week. If you don’t care about getting ahead fast, five days a week will be enough.”

It wasn’t all work for Johnson. In his younger years, he said he would go out dancing on Friday and Saturday nights. It was at one of those dances where he me the love of his life and wife, Charlene. Johnson said his wife was the definition of a true farm wife.

“She always fixed me breakfast. I didn’t get up early enough that she wasn’t fixing breakfast for me when I wasn’t ready. You know, that is half of farming. You just need a good wife,” Johnson said. “She would work cattle until 11:30 then go in and make lunch for the whole crew. Then, after she cleaned up, she would go back to working cattle.” Johnson said his wife was the heart of the family and taught them the true meaning of love.

“One great thing about her was all the kids loved her. She liked everybody and everybody liked her. She was great. You can’t hardly do it all by yourself, you just need a good partner,” Johnson said with a smile. “She taught us just to love everybody I guess. The more you love kids the more they love you, too.”

“I used to work a lot of hours for him,” Rhoades said. “One time I asked him for a raise in the 1980s when I was making four dollars an hour. He said, ‘I can’t give you a raise, but I need another hired hand. If you want to work another 40 hours per week, I will let you.’ So I did.” Rhoades said he tried to pass these values down to his children.

“Hard work is the main thing he has taught me, and I tried to teach my kids,” Rhoades said. “He taught me from the time I was young that when it is time to plant cotton or when it is time to cut silage, when it is time to do anything, jump off in it and bust your butt for however many days and get it done. I think that goes into life, just work hard at it.” In farming and in life, Johnson said surrounding yourself with good people is the key to it all.

“I can’t emphasize enough how important it is to know the right people,” Johnson said. “Know good people, and they will help you up and down the road.”