The Ups and Downs of Cotton Production 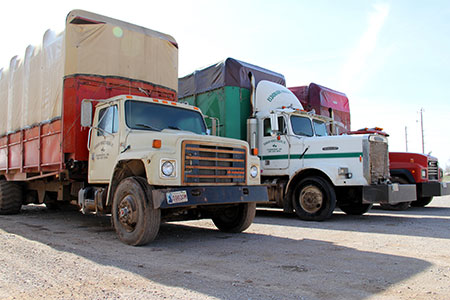 Module trucks at Farmers Cooperative Association of Eldorado are parked for the year after a record breaking ginning season.

At the beginning of the 2014 crop year, farmers across Texas, Oklahoma, Kansas, and New Mexico were praying for rain to be able to grow a successful crop. Nearing the end of the crop year, wet weather in some areas delayed the harvest and ginning operations. The abundance of moisture across the region is setting farmers up for what looks to be a promising start for the 2015 crop.

South Texas and Kansas had timely rains and favorable weather during the growing season which resulted in abundant crops for both areas. West Texas and Oklahoma faced a challenging year with much of the crop uncertain in the beginning due to the lingering drought. However, some areas of the region still managed to harvest plentiful crops. 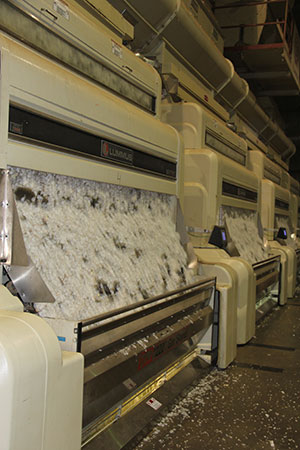 As of mid-February, ginning was still in full swing at Farms Coop Society in Wellington.

Plains Cotton Cooperative Association’s South Texas Division Manager Cris Gwinn said most of that area was fortunate to have ideal weather for growing this crop.

“The region as a whole enjoyed bountiful rain during the growing season with the exception of the Corpus Christi area,” Gwinn said. “The Corpus area was one good rain away during July from having a tremendous crop. We were blessed with excellent weather for our harvest which in turn provided an outstanding quality of cotton and a speedy harvest.”

“Module Tracking helps us a lot to keep our modules straight and everything,” Bradford said. “It makes the day-to-day activities at the gin run smoothly.” Moreman Coop Gin and Coastal Bend Coop Gin both used Module Tracking for the first time this year and plan to continue to utilize the service in the future.

“Big crops come with big challenges during the season and afterwards,” Landry said. “Thanks to the gin being in excellent condition, no situation seemed too big to overcome. Other than the excessive amount of rain, the only major breakdown was the top ram of the press.”

Jimmy Roppolo, Gin Manager at United Ag Coop, said the extensive rainfall during harvest and ginning season caused them to face many weather related issues. He also said the Module Tracking program played a large role in the ginning operations the past two years.

“They did a great job of working on the program and changing some things for us that we happened to run into problems with,” Roppolo said. “It is a good program and it is maintained. It has helped us out quite a bit.” 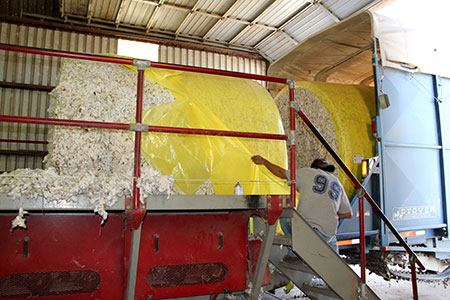 Employees at Mereta Coop Gin unload round bales onto the module feeder as they gin the large crop this season.

The 2014 crop in South-Central Kansas proved to be one for the books as farmers in the region harvested record yields. The average yield for the region in recent years has ranged from 600 to 650 pounds of lint per acre, but this season’s average was almost 900 pounds. PCCA’s Marketing Communications Area Manager Zach Hrencher said the farmers in Kansas played a significant role in making the 2014 crop a success.

“This year’s yields were pleasantly surprising,” Hrencher said. “While Mother Nature is to thank for the timely rains and heat units, a lot of credit must be given to the farmers who properly fertilized and made timely chemical applications. These are the type of yields that get other farmers interested in growing cotton in Kansas.”

“These yields are the best we have ever seen,” Friesen said. “We also saw the highest individual dryland yields ever, 1,711 to 1,885 pounds in large acreage fields which equates to 3.6 to 3.9 bales per acre, respectively,” Friesen added. “No one thought we could beat the yields of 2013, yet several farmers harvested more that 1,500 pounds per acre this season.” Friesen also said the 2014 yields and the continual survival of cotton in South-Central Kansas prove they receive the necessary rainfall and heat to grow cotton.

“It is clear to me that cotton, in the long run, is and will continue to be an excellent fit within this region’s crop rotation system,” Friesen said. “With the new developments in harvesting equipment and cotton varieties, the future of cotton in South-Central Kansas has never been brighter.”

The crop in West Texas and Oklahoma was not without challenges; however, some gins in the area set ginning records. These include Eldorado and Carnegie in Oklahoma and Mereta, Coyanosa and Wellington in Texas.

Tanner Streety, PCCA Marketing Communications Area Manager, said the 2014 crop year was challenging because the drought caused the acreage estimates at the beginning of the season to be uncertain.

“Farmers had a hard enough time starting a crop with little to no rain, but the task of controlling the weeds and fighting low market prices really made things overwhelming,” Streety said. “The only way to survive a year like this is to produce a large volume crop to counter the low market prices. However, with as many inputs as farmers have in their operation, and the continuous fight against the drought and weed problems, it makes it extremely difficult to get that high volume out of a crop to turn a profit.”

Farmers Coop Society in Wellington will set back-to-back ginning records in 2013 and 2014. Gin manager Kim Martindale said they made upgrades before the ginning season in anticipation of the large crop; however, they have still faced some challenges this year.

“The cold and wet kept us from hauling modules out of the fields at times,” Martindale said, “but luckily we never ran out of cotton on the yard and just like any other gin, there are always breakdowns to deal with.”

Martindale also said that PCCA and its Module Tracking program have helped them this ginning season.

“Whatever they can do to help us, they do,” Martindale said. “We have them on speed dial, and if the first person you talk to can’t help you, they know who you need to talk to. Our members are in contact with PCCA at times, and it is a really good service to them and our gins.”

Mereta Coop Gin completed a large gin remodel before the beginning of the season, and this has been a record breaking crop year. Paul Schwertner, Mereta Coop Gin Manager, said back-to-back rains have slowed down the ginning process some, but they are hoping for some favorable weather to be able to finish ginning this season, sometime around early-to mid-April.

“Handling this much cotton is just a long, slow and tough process,” Schwertner said. “You just have to shut down and fix the things that wear out and just try to stay focused, try to keep morale up in all of the employees, and keep everybody happy.”

Everything ran smoothly at Farmers Cooperative Association of Eldorado and Martha this year. Barney Trammell, Gin Manager, said this was the first year for them to operate two gins, with two crews at the Eldorado location and one at the Martha location.

Coyanosa Coop Gin barely beat the previous ginning record this year, but it was not without challenges. Becky Chavarria, Gin Manager, said they had an electrical overload that caused them to shut down for a couple of days and the wet weather, similar to other gins, also slowed them down.

Carnegie Coop Gin Manager Jeannie Hileman said this was the first year they have had to deal with round bales, and figuring out how they affected the ginning process and timeline was challenging in the beginning. Overall, it had a positive impact on the process by increasing the ginning rate by three bales per hour.

“I have a group of guys out there that have just done a superb job as far as handling operations, and we have had very little down time,” Hileman said. “Had they not kept the gin up and running as well as they did, I am sure we would not have handled as many bales as we did.”

Taylor Hurst, PCCA Marketing Communications Area Manager, said even though the 2014 crop has been surprising, it is time to look forward to the future and focus on next year’s crop.

“I would have to say this crop was a surprising one,” Hurst said. “I think a lot of the farmers were pretty uncertain about how it was going to turn out, and for some it ended up better than they were thinking it would. For others, though, it was a pretty tough season that could be hard to recover from. Hopefully the rain and weather will be in our favor, and we can just move right on to the next one.”