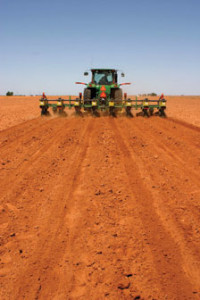 Near perfect weather and beneficial rainfall have set the stage for a potentially incredible 2010-2011 cotton crop in most of Plains Cotton Cooperative Association’s marketing area. At the end of May, farmers said pre-plant moisture levels in Texas, Oklahoma, and Kansas were better than many had seen in generations.

The air was filled with optimism as planting was progressing smoothly by the last week of May, and the amount of acreage dedicated to cotton was expected to increase in all three states. At the same time, cotton plants already were thriving in South Texas where producers looked forward to a “phenomenal” crop after several years of drought and lower than expected yields.

Although conditions in some areas of the U.S. Cotton Belt were not as ideal, USDA still expected U.S. cotton production to increase this season. The department projected a 16.7 million-bale U.S. crop for 2010-2011, based on its March 31 Prospective Plantings report, a seven-percent abandonment rate, and a projected yield of 815 pounds per harvested acre.

On the supply side, USDA predicted U.S. cotton exports will rise to 13.5 million bales in the upcoming year as foreign demand is expected to outpace supply. Ending stocks were projected at 3 million bales, the lowest since 1995-96.

Although the department projects world cotton production to rise almost 11 million bales in 2010-11, world cotton supplies will increase less than one percent from last season. An anticipated increase in world consumption, coupled with a decline in ending stocks, resulted in an expected stocks-to-use ratio of 42 percent, the lowest since 1994-95. 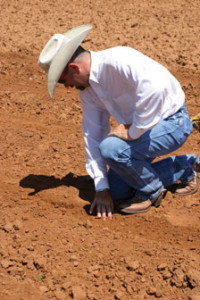 With almost all of his cotton acreage planted by late May, farmer Donald Rhoads of Ropesville, Texas, gauges the seed depth of his planter as he begins work in a new field.

“World cotton stocks continued to decrease in 2009-10, and the amount of cotton expected to be planted this year probably will not produce enough to meet world needs,” Wally Darneille, PCCA’s President and CEO explained. “The bottom line is that global demand for cotton is steadily outgrowing supply. The hope is that market prices will continue to draw on support from expected tight inventories. Barring an unforeseen economic jolt, we should see good prices continuing through 2010 and into 2011,” he said.

Into the next year, many expect an ongoing steady-to-solid demand for cotton. Global mill use rebounded faster and stronger than expected after a sharp drop in 2008-09 caused by the global financial and economic crisis. Although many economists believe the global recession is over, other market influences, including euro-zone debt issues, came to light this spring. The situation generated worries about the economy and also boosted the U.S. dollar, both of which normally hurt commodity prices.

“Weaker equities tend to hurt confidence in the economy and thus cotton demand while a stronger dollar makes commodities generally more expensive in other currencies,” a trader explained.

“The fragility of the world economic system is worrisome,” Darneille said. “There are many different factors out there that could affect both the price of cotton and the continued demand in the upcoming year.”

Despite the possibility of global economic issues, cotton’s news and fundamentals still were very supportive in the spring of 2010, and the outlook for the upcoming season was equally so. Cotton producers and the industry as a whole were looking forward to the 2010-11 season with great expectations.