Each year, the Texas Agricultural Cooperative Council (TACC) selects individuals to receive awards for their service and dedication to the industry. This year was no exception as Bob Ballard, Tommy Engelke and Lonnie Winters were honored at TACC’s Joint Cooperative Meeting held in Galveston, Texas, this past March.

GINNER OF THE YEAR AWARD 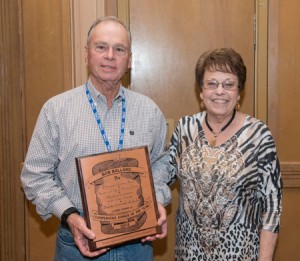 TACC recognized Bob Ballard as Cooperative Ginner of the Year.

Bob Ballard, recently retired general manager of Farmers Cooperative Association in Tahoka, Texas, received the TACC Cooperative Ginner of the Year award. While presenting the award, Gail Kring, CEO of PYCO Industries in Lubbock, Texas, said Ballard had a significant impact on the cooperative movement throughout his career.

“It’s in his DNA to help others, and he has proudly been doing so for many, many years,” said Kring. “He has been quite a fixture in the existence of the cooperative movement and cotton ginning on the High Plains all these years.”

Born in 1943 in Lubbock, Texas, Ballard grew up on his family’s farm in Rochester, Texas. He was very active in FFA in his youth, showing steers and sheep. Ballard graduated from Texas Tech in 1966 with a degree in agriculture, and his first job was at New Home ISD teaching vocational agriculture. He spent the next 12 years teaching at New Home ISD. During that time, he met his wife, Linda, who was an English teacher. They were married in 1968 and have three sons, Shawn, Todd and Cory, as well as three grandchildren, Chase, Jet and Ashlyn.

In 1977, Ballard began his 31-year career in the cotton industry as general manager of New Home Coop Gin where he stayed for the next 18 years. In 1996 he switched gears and began working for South Plains Industrial Supply in Lubbock selling gin parts and supplies. He decided to return to gin management in 2002 taking a position at Farmers Coop Gin in Tahoka. He retired earlier this year after managing the gin for 13 seasons. During his career, he ginned 870,639 bales of cotton, and his largest crop was in 2007 when he ginned 73,455 bales.

Ballard has also had a significant impact on the coop movement. He served as the last president of the Texas Cooperative Ginners Association which merged with another statewide coop to form TACC in 1984. Over the years, he has continued to support Lynn County youth by helping them raise their sheep. One year, the county dedicated the Lynn County Stock show to Ballard for his support and mentorship over the years.

TACC COOPERATOR OF THE YEAR 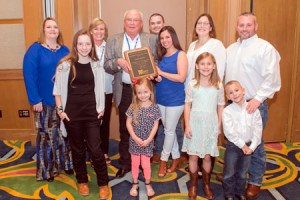 Lonnie Winters was joined by family as he was honored with the Cooperator of the Year Award.

Lonnie Winters, PCCA Vice President of Marketing, had the honor of being named TACC Cooperator of the Year. Buzz Cooper, general manager of Texas Star Cooperative Gin, presented the award in Galveston.

“Lonnie Winters has developed a reputation far and wide as a tremendous resource, a trusted advisor, a good listener, and a smart champion for America’s cotton farmers,” Cooper said. “His intent is to deliver the best return to those who make this country the bedrock of our society.”

Winters was raised on his family’s farm near Lone Wolf, Oklahoma. In 1971, he went to work in the office at Granite Farmers Coop Gin and was named manager in 1972. He later worked as a cotton buyer for W.R. Moore Cotton Company, buying cotton in Oklahoma and Texas. Shortly thereafter, he moved to Lubbock to work for Hohenberg Cotton.

Winters joined the PCCA marketing staff in 1993, and he was promoted to vice president of marketing in 2004. In 2015 he was named interim president and CEO of PCCA. 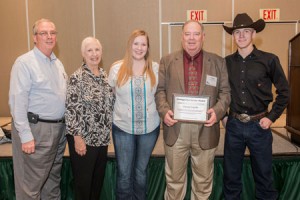 Tommy Engelke and family after receiving the Distinguished Service Award.

After 38 years of serving coops, Tommy Engelke received the 2015 TACC Distinguished Service Award for his dedication to cooperatives across the state.

“Our Texas Agricultural Cooperative Council is highly regarded as one of the best state councils in the nation,” said James Deatherage, General Manager of Producers Coop, “and this is directly attributable to Tommy and his relentless, determined attitude.”

Engelke was born and raised on a farm near Kingsbury, Texas. Growing up, he worked with his parents and three brothers on the farm and attended Luling High School where he was very active in FFA, serving as president and vice president. He earned his Lone Star and American FFA degrees and had the opportunity to travel abroad with the organization. During his time abroad he worked on a farm in Hassel, Germany.

Engelke attended Texas A&M University where he earned a bachelor’s degree in agronomy and a master’s degree in agricultural journalism. He began his career in 1974 as a trainee for the Soil Conservation Service. His next stop was the Rice Council for Market Development in Houston. He then spent 12 years with Texas Farm Credit Services/CoBank in Austin before he settled with TACC in 1989. Since 1996, Engelke has been Executive Vice President of TACC.

Engelke has two children, Shirley and Clayton. Throughout his career he has traveled to 13 foreign countries and 44 states in the United States. He logs about 25,000 miles each year visiting other people in the industry.