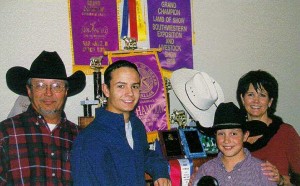 At age 16, Bonner Cooper already has accomplished a feat unsurpassed by many people. He has exhibited Grand Champion Lambs at four major stock shows in Texas including Fort Worth, San Angelo and the Texas State Fair in 1998 and San Antonio in 2000.

His 11-year-old brother, Ross, quickly is developing a taste for stock show success, too. He placed third in a swine class at the 2000 San Antonio Livestock Show. Ross also won Reserve Grand Champion Lamb at the Cooper Livestock Show the same year.

The boys also have enjoyed success in many other extra-curricular activities while achieving and maintaining academic honors. Bonner and Ross both attribute their success to hard work, family and friends.

Bonner says, “It’s important to look to the right people for advice.” He and Ross agree that their dad is at the top of the list. “He is a nervous wreck during stock shows, but he’s always there when we need him,” says Bonner with a tone of admiration. Their dad is Buzz Cooper, manager of Union Coop Gin in southeast Lubbock County.

A modest man to the core, Buzz Cooper finds it difficult to accept credit when credit is due. He has a humble sense of achievement that is evident throughout his past experiences, his family and his career.

Cooper seems to thrive on adventure and competition and the challenges they provide. At the age of 18, he decided to try his hand at saddle bronc riding. As a member of the Professional Rodeo Cowboy’s Association, he was in contention for the 1973 Rookie of the Year award until an injury temporarily sidelined him. Despite the setback in 1973, his rodeo career continued another 13 years. With a gleam in his eye, Cooper describes his bronc riding experience as “a thrill and a definite adrenaline rush.”

His wife, Kim, also was no stranger to the rodeo scene. She and Buzz began dating during her reign as Miss Rodeo Texas in 1978 and married the following year.

Bonner and Ross each have a desire to follow in their father’s footsteps and eventually try their hand at saddle bronc riding as well. Cooper seems excited that his children wish to share some of his life experiences.

“They both really want to try it, but I’m not going to push them.” Cooper adds that he wants them to make the decision on their own.

“I would like them to learn how to ride the right way so that they have less chance of getting hurt,” says Kim with a concerned look. “But I guess they have the best teacher they could possibly have.”

Cooper’s desire to succeed does not end with stock shows and rodeos. As gin manager, he has worked in the community of Union for three years. In that time, Cooper says he has formed many lasting relationships with his farmer- customers.

“Working with good farmers is what makes the job worthwhile, and Union Coop encompasses many generations of farming families,” Cooper is proud to say. “Our members’ dads and granddads started this organization more than 40 years ago. Building upon their legacy includes modernizing the plant and welcoming new members.”

“This community really welcomed us with open arms,” Kim says, “and Buzz would do anything he could to help these farmers.”

In addition, Cooper stresses how important it is to have a good relationship with the surrounding coop gins. He says although they all are competitors, they have a common purpose and would help each other if needed.

Cooper’s love of the cotton gin and its members reaches back to his childhood days. He practically was “raised in a gin” because his father managed the former McAdoo gin and then ran the Ralls Coop gin for more than 12 years. Cooper followed his dad into the industry when he became part owner and manager of C&R Gin in Ralls.

Three years ago, Cooper left his familiar surroundings to join the team in Union. With a smile, he says he loves his job and can think of nothing he would rather do.

Buzz Cooper is more than just the gin manager for Union Coop. He is an advocate for the farmers and a man who has passed on his courage and sense of sportsmanship to his children.

Like their father, Cooper’s sons have learned how to compete. The boy’s bedrooms are covered with banners, trophies, belt buckles and ribbons: illustrations of their commitment to excellence.