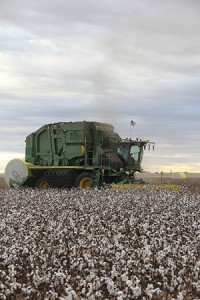 The cotton market so far this season has been a virtual mirror image of a year ago with futures prices locked in a narrow 60- to 68-cent range. Slow demand resulting from a number of factors has thwarted any opportunities for the market to gain some momentum as the world’s textile mills have been buying cotton in a “hand-to-mouth” fashion since the 2015-16 marketing year began.

The most notable lack of demand is found in China where imports have plunged this year after the government announced it would limit quotas to about 4.1 million bales in order to encourage consumption of domestically-grown cotton. It is estimated that almost 50 million bales currently are held in government-owned reserves. In December, USDA estimated China’s cotton consumption would total 32.5 million bales this marketing year, down 500,000 from the previous month’s projection.

Imports for the first nine months of 2015 were down 42 percent, according to the China Cotton Association. In September alone, China imported 58.6 percent less cotton than it did in the same month a year ago. Meanwhile, in early November, the government announced it would maintain the same import quota of 4.1 million bales for 2016.

USDA and the International Cotton Advisory Committee (ICAC) have lowered their estimates of China’s cotton imports in 2015-16 to 5.75 million bales and 5.50 million bales, respectively. Imports in excess of China’s 4.1 million bale quota will be subject to higher tariffs as mills there are expected to seek better quality cotton than is available domestically. The reduced estimates for China’s imports are based on expectations for mill use to decline this season due to high production costs that have forced textile mills to reduce operations or completely shut down.

The volume of cotton purchased via the auctions fell far short of NDRC’s goals due to concerns about the quality of the fiber and the high floor prices relative to prevailing world prices. Another factor was low prices for man-made fiber which has continued to take market share from cotton. Evidence of this can be found in the decreased import levels of cotton yarn which are not as restricted by quotas in China.

Compounding the world cotton market situation is China’s overall economy which has rattled economies elsewhere in the world. China’s stock market fell more than 40 percent between mid-June and August, forcing the government to take unprecedented action. One of those actions was a surprise devaluation of China’s currency, the yuan, in mid-August after a survey revealed the factory sector declined at its fastest rate in more than six years. By early November, Beijing also had cut interest rates for the sixth time in a year after the country’s economic growth dipped to 6.9 percent in the third quarter, the worst performance since the 2008-09 financial crisis.

Reports at that time also indicated Chinese leaders expected the economy to shift to a slower rate of growth, perhaps as low as 6.5 percent, as the government began crafting its next five-year plan. Details of the plan, which some say will call for increased consumer spending, are scheduled to be announced in March.

Since China is the world’s second largest economy, its economic woes have had a domino effect on other countries. Consequently, currencies primarily in emerging markets also have been devalued, making U.S. products, including raw cotton, more expensive.

The United States is not the only country that exports cotton to China. India, the world’s largest cotton producer and second largest exporter, and Australia also are affected by Chinas cotton import quotas. India may be able to sell more cotton to Bangladesh this season, but Australia stands to feel the most impact because almost two-thirds of its exports went to China during the past four seasons.

Meanwhile, the United States has managed to offset the lower exports to China by increasing sales to other markets. By late November, sales of U.S. cotton to Mexico for delivery in the 2015-16 marketing year stood at almost 970,000 bales. Turkey had purchased 678,000 bales, Vietnam had purchased almost 566,000 bales, and sales to Indonesia stood at almost 350,000 bales. Two possible reasons for Mexico’s strong volume are a shortfall in domestic cotton production and the attractiveness of U.S. cotton at current price levels.

Overall, cotton imports by Asian countries other than China are expected to increase this season to 20.7 million bales, according to another report from ICAC, representing 60 percent of projected world cotton trade. Bangladesh may import more than 4.5 million bales this marketing year, up 4 percent from last year, and imports by Vietnam may exceed 4.5 million bales. Indonesia’s imports may increase to 3.6 million bales, ICAC said.

Despite the brighter outlook for improved sales to other Asian countries, some traders and analysts have been concerned about the United States achieving USDA’s current export sales estimate of 10.0 million bales. Since the beginning of the current marketing year on Aug. 1, weekly export sales of U.S. cotton have been limping along. Some of the more pessimistic observers were talking about exports as low as 7.5 million to 8.0 million bales, but at least one analyst sees opportunity.

Based on the November supply and demand estimates from USDA, the analyst separated the data into three parts: the United States; China; and the rest of the world (ROW). The analyst combined the ROW production shortfall with China’s cotton imports, and the result was a seasonal deficit of 13.3 million bales. If the United States exports the 10.0 million bales currently estimated by USDA, it still leaves a deficit of 3.3 million bales. Consequently, the analyst concluded U.S. exports are needed to fill the deficit in the ROW.

The 2015-16 season is far from over, and a number of factors will be closely monitored by traders and analysts. First, the U.S. cotton harvest was only 80 percent complete as of Nov. 29 compared to the five-year average of 88 percent. Second, it appears there will be a shortage of high-grade, machine-picked cotton this season. Third, lingering doubts about China’s economy and its impact on other countries continue to be mentioned on a weekly, if not daily, basis in market newsletters and commentary.

ICAC’s latest forecast for world cotton consumption this season was reduced by 3.0 million bales to 112.0 million. Despite the reduction, the consumption level will be 918,600 bales more than in 2014-15.