Cotton Production in Kansas and Northern Oklahoma Continues to Expand

Cotton is finding a new home in Kansas and Northern Oklahoma where it has become one of the fastest growing commodities with acreage and production increasing every year.

Kansas’ first significant crop in 1995 totaled 3,200 acres producing 4,500 bales. These numbers have skyrocketed since then with the 2003 Kansas and Northern Oklahoma crop totaling 92,900 acres and 111,500 bales. It is only the beginning, and the trend looks good, according to Dick Cooper, Plains Cotton Cooperative Association (PCCA).

It looks so good that PCCA created a new position for Cooper; director of business development for Kansas and Northern Oklahoma in order to accommodate this rapidly developing market (see related story on next page).

All Kansas gins have to increase capacity in order to handle the increasing volume of cotton each year.”Gene Latham

Cooper believes the 1995 Farm Bill played a huge role in cotton expanding into this northern region. Past bills required specific crops to be planted on base acres in order for farmers to be eligible for government programs. Known as “Freedom to Farm,” the 1995 legislation opened up new opportunities for farmers because it gave them total freedom to plant any program crop on their base acres and still receive eligible benefits.

In Southwest Kansas, irrigated cotton is proving to be a more cost-effective crop than corn for this area. Although less than 2 percent of corn farmers in Kansas have switched acres to cotton, it is providing huge advantages over the grain crop. For example, cotton does not require nitrogen like corn. Also, minimal July and August rains can benefit cotton but has less effect on corn, according to Cooper. In central and southeast Kansas, cotton fits well in farmers’ traditional sorghum and soybean crop rotation programs. 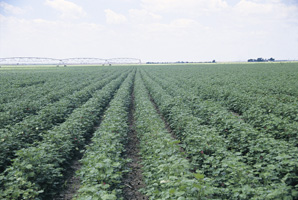 “We are seeing corn producers switching over because cotton is so much more cost-effective for them,” Cooper explained. “Cotton also uses less water than corn.”

The decline of the Ogallala aquifer has become a concern for irrigated farmers in Kansas and Oklahoma. Both states have been suffering a drought, consequently requiring more irrigation water to be pumped out of the aquifer. Cotton requires half the amount of water as corn, thus conserving water in the aquifer and reducing irrigation costs.

Cooper said another benefit is the absence of boll weevils. The USDA has never caught a weevil in Kansas, and it is believed they will not migrate that far north due to the eradication efforts in Oklahoma and Texas. Bollworms, also known as corn ear worms to corn producers, pose less of a problem to the northern cotton growing areas.

Northwest Cotton Growers (NWCG) in Moscow, Kan., had a record-breaking year despite the hail, fungus and heavy rain that caused flooding in the area earlier in the season. Consisting of mostly irrigated cotton acres, NWCG gained more than 50 new producers and doubled its volume in 2003-04, according to Manager Jerry Stuckey. New members’ and existing members’ planted acres resulted in 53,565 bales, Stuckey said.

Due to the huge increase in volume last year and an anticipated increase for the 2004-2005 season, NWCG will be expanding the gin’s size. The gin will be remodeled for a four-stand gin that will process 60 bales per hour.

The new season looks even more promising with Stuckey hoping to gin 70,000 to 90,000 bales. NWCG has held four production meetings this year, and at every meeting most producers have talked of increasing their acres, Stuckey said.

Unlike NWCG which mainly handles production from irrigated acres, OK-Kan Cotton Cooperative, located in the south central Kansas town of Anthony, has an equal acreage of dryland and irrigated cotton.

“We are seeing an increase in acres each year,” Gin Manager Gary Fiest said. “However, we are not experiencing the drastic increase like Southwestern Kansas.” OK-Kan did set a record of 17,800 bales in 2003- 04.

Although irrigated cotton has dominated Kansas, the eastern part of the state is mainly dryland because it usually receives 28 to 32 inches of rain annually. However, the area has endured a three-year drought, but it has not slowed cotton production.

“We see new growers each year, and that is what is encouraging,” Latham said. 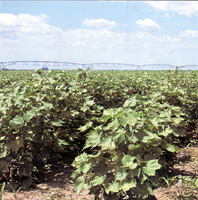 Ten percent of SKCG’s 2003-04 cotton crop was grown by new producers, and they will continue to grow cotton in the future, Latham said. With the number of producers increasing, so is the number of farmer-owned cotton strippers, and this is developing a workable infrastructure for this rapidly growing industry.

“All Kansas gins have to increase capacity in order handle the increasing volume of cotton each year,” he said.

“Cotton’s expansion north has been facilitated by PCCA and its cooperative structure,” Cooper said. “PCCA has provided stability to this growing cotton area because those farmers have to worry about their bankers, growing the crop, harvest time and ginning,” he added. “However, they have not had to worry about warehousing and marketing.”

“Kansas and Oklahoma farmers have a high degree of respect for PCCA, and nearly 100 percent of the cotton produced there is warehoused and marketed through the cooperative,” Cooper said. “The four gins who represent these farmers have been appreciative of PCCA.”

Cooper is excited about the future of Kansas and Northern Oklahoma cotton for PCCA with expectations for an estimated 500,000 bales of production before the end of the decade.