When you look back on 2020, what will be the first thing that comes to mind? Possibly it could be that this is the year for a presidential election, or the year that the United Kingdom left the European Union. However, it is much more likely that face masks and social distancing will be at the front of your mind when you remember the year 2020.

People worldwide have been impacted by COVID-19 in one way or another. For some, it meant staying at home for the safety of their families or altering how they worked. Many lost the opportunity to work due to business closures. For individuals designated as critical infrastructure, it meant working hard to keep food and fiber flowing to market.

On March 11th, the World Health Organization declared COVID-19 as a pandemic. A pandemic is defined as “an outbreak of a disease that occurs over a wide geographic area and affects an exceptionally high proportion of the population.” Shortly after is when Americans began to see the effects of COVID-19 in their local communities. On March 16th, President Trump issued guidelines for social distancing. Most states issued stay at home directives or other measures to help keep citizens healthy and slow the spread of the virus. Most of retail and foodservice was considered non-essential and therefore scrambled to move operations online and curbside only. Some simply closed their doors. As a result, the United States unemployment rate reached 14.7 percent in April, up from 3.5 percent just two months prior. As of July 15th,
an estimated total of 13 million people have contracted COVID-19 around the world, with 3.5 million of those in the United States.

With economies around the world closed, what does this mean for agriculture? More specifically, how will the cotton industry fair through the course of the pandemic?

Before the pandemic, the cotton market was beginning to recover from the effects of the trade war with China. Prices had begun to move to better levels while worldwide demand was holding above 120 million bales. Keith Lucas, PCCA Vice President of Marketing, said that level of demand was good compared to global cotton production. COVID-19 has had a significant impact on both demand for cotton products as well as cotton prices. Currently, global use is down to 102 million bales, according to USDA.

“First of all, because of shutting down so many economies around the world, we have had demand destruction,” Lucas said. “The biggest part of our responsibility has been to ensure that we worked with our customers to fulfill our commitments to them. In some cases, we needed to work with them to delay shipments since many destination ports were closed for several weeks.”

Lucas said this is an ongoing situation, and the PCCA sales team is working through some logistics in countries like Indonesia that have been slow to return to normal operations.

“One of the positives during this time has been access to the Chinese market. If you recall, China was the first economy to shut down and the first to reopen.” Lucas said. “Their interest in U.S. cotton has been one of the few bright spots for us.” 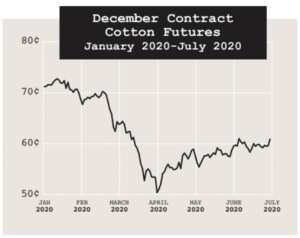 Lucas said the lack of retail purchases of cotton apparel and textiles impacted the overall market. Cotton futures prices have dropped over 30 percent since the beginning of the year.

“The market had already been affected by the tariff war between the U.S. and China,” he said. “We were finally getting past it. We had moved back into the low 70s, which was good for the marketplace to have better prices. Not great, but better. When the COVID pandemic came in, we moved back down into the 50s. At one point, the July contract declined to 48.15 cents. So, we have had demand destruction and price destruction.”

Lucas said COVID-19 has impacted the ability to sell cotton. The pandemic left no segment of the cotton supply chain untouched. It resulted in disruptions in the normal flow of business.

“The severity of the coronavirus determined which markets were open for business,” Lucas said. “We were very fortunate in the fact that we had sold a good bit of our cotton before the pandemic.”

As countries around the world began to reopen, Lucas said there have been changes in the cotton industry’s buying patterns.

“Economies are beginning to open up, ours included, but we are seeing changes in buying patterns, changes in where those markets are going to be,” Lucas said. “China, for example, has lost some of its market share. Vietnam has picked up some of that. Still, you are going to see some other countries that are going to be able to take some consumption from China just because of the situation now.”

Lucas said the retail sector must come back for demand to recover. According to Cotton Incorporated, consumer spending on clothing in April 2020 was down 48 percent from the same month last year, while overall spending was 17.3 percent lower year-over-year. However, Lucas said U.S. government stimulus measures helped soften the blow of decreased consumer expenditures. The CARES Act, a $2 trillion economic relief package, was signed into law on March 27th. This stimulus support increased personal income almost 12 percent year-over-year in April, according to Cotton Incorporated.

“I don’t know that we have seen the overall impact of it yet because our government stepped in and put money into the hands of the unemployed people,” Lucas said. “Because the federal stimulus was so strong, households have saved more. The April personal savings reached 33 percent, almost two times as much as the previous record set in 1975. People are a little bit concerned, so they are saving just in case.”

Retail consumer spending at the beginning of the pandemic concentrated on food and other household necessities. However, as consumers were getting out, spending on apparel was in the mix.

“When you consider that apparel purchases plunged 79 percent in April compared to February, it was encouraging to see a strong rebound in the May report,” Lucas said. “If you think about it, buying some new clothes is a cheaper way to get out and spend a little money when you are tired of being at home and can’t travel. That was a good surprise, and could help us try to get through some of the inventory glut.”

Lucas said the pace of consumer spending on textiles will drive recovery from the pandemic’s effects. Despite current situations, China has been buying agricultural products as part of the country’s commitment to the Phase One Trade Deal with the United States. 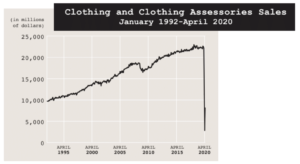 “I think China has tried to live up to the spirit of it,” Lucas said. “You have two factors. One, obviously, they weren’t open as an economy. They weren’t taking in goods, and they certainly weren’t producing textiles. They have been much better at buying food, grains, soybeans, and corn, that sort of thing.”

The second factor of that is because of the impact of price destruction, Lucas said.

“They are buying more, but they are paying less for it,” Lucas said. “So they aren’t meeting the goals of the dollar values that they had associated with meeting the requirements of the agreement. Despite the controversy regarding the coronavirus, China and the U.S. have consistently affirmed their commitment to the Phase One deal.”

While many factors are working against cotton producers, the benefits of grower advocacy groups shine during difficult times. The work of organizations like the National Cotton Council and Plains Cotton Growers is critical to preserving safety net programs such as ARC, PLC, MFP, and CFAP. 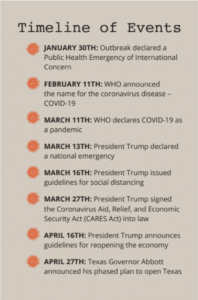 “The encouragement is that cotton does give you that benefit,” Lucas said. “It does cash flow typically a lot better than some of the alternative crops. It is because of the faithfulness of growers to be part of these advocacy groups that help you get through these tough times. We saw an economy that was really on fire. It really was. We were set to see some improvements in both price and consumption. I’m optimistic that we can get back there eventually.”

People around the world have realized in their daily lives that getting through the pandemic and back to normal will be a work in progress. Likewise, the economic recovery will also take some time. Nevertheless, PCCA is committed to its grower-owners and will continue to work hard to add value to their cotton.