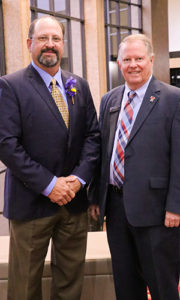 Each year, The College of Agricultural Sciences and Natural Resources at Texas Tech University honors individuals with the Gerald W. Thomas Outstanding Agriculturalist Awards. This award was established in 1969 and recognizes people who “contribute immeasurably to the general good of the agriculture industry.” According to CASNR, to be eligible to receive this honor the individual must be successful in his or her chosen profession, have demonstrated substantial contributions to the agriculture industry and have been recognized by their peers for such efforts.

This year one of the South Plains cotton industry’s own, Craig Heinrich, was presented with this award at the 92nd Annual TTU CASNR Pig Roast. Craig is a third-generation farmer from Slaton, Texas. He and his wife, Melinda, have been married since 1999 and have two children, Emily (19) and Holt (16).

Throughout his farming career Craig has been devoted to serving his community and the cotton industry. He has served on the Board of Directors at Slaton Co-op Gin since 1997. Through the gin he became involved with Plains Cotton Growers, Inc. and has served on the PCG board since 1998. Within PCG he is a past president of the board, current chairman of the PCG PAC and is active with the Plains Cotton Improvement Committee. He also serves on the board of the Southwest Council of Agribusiness.

Craig is a member of PCCA’s delegate body and current chairman of the cooperative’s Marketing Pool Committee. Since 2003, he has served as a delegate to the National Cotton Council, and he is active with NCC’s American Cotton Producers where he is one of three Texas State Chairman for the organization. Craig also serves as a director for Cotton Council International, which is NCC’s export promotion arm. Through CCI he has had the opportunity to be involved with special trade missions around the world where he visits with cotton textile executives and manufacturers.

His service to the cotton industry doesn’t stop there. He has served on Cotton Incorporated’s board since 2003. At CI he has served on the following committees: Chairman’s, Government and Pension, Agricultural Research, Global Supply Chain Marketing, and Research and Development.

Craig believes in using his voice to be an advocate for agriculture and his fellow farmers. He frequently travels to Washington, DC, to visit with congressional staff and representatives to help shape farm policy.

His dedication to sustainable farming practices earned him the award of Slaton Farmer of the Year in 2015. This is selected on the criteria of farming practices, weed control, conservation and yield production.

“Craig is a natural leader and I know that because he offers to help even when the job is pretty difficult,” said Kevin Brinkley, PCCA President and CEO. “There are a couple examples of that in things that he has really stepped up on. One is the Plains Cotton Growers Political Action Committee, which involves a lot of fundraising. He also serves as chairman of our Marketing Pool Committee here at PCCA. That’s where you have to take a lot of input from a lot of different areas of the cotton production in Texas, Kansas and Oklahoma. He leads with great skill and does so enthusiastically.”

Brinkley said Craig is an authentic person who betters those around him.

“He challenges me every time he sees me to do more and better things for our producers, and he is there to help me do that. Most of all I think Craig has an optimism that lifts everybody around him. It’s no secret that agriculture is going through some pretty tough times right now and it would be easy to get down about it and down about the future, but Craig’s positive attitude really serves to lift those around him and help us keep that resolve to keep going. All of these things I think make Craig an outstanding choice for this award. Craig, I want to thank you for your servant leadership and what you mean not only to PCCA but to the agricultural industry in West Texas in general. The example you set helps us keep improving ourselves and helps us keep going through life’s challenges.”