Born and raised on a 2,800-acre sheep ranch near Del Rio, Texas, in the 1950s, Lee Anne Hutto-Powell has spent her whole life in the world of agriculture. Best described as a woman with as much grit as she has grace – she can do anything she sets her mind to, including running a farming operation with her husband, Larry Powell, in Tom Green County, Texas. With determination, endurance, and a heart most only dream of having, Lee Anne is a one-in-a-million kind of person. 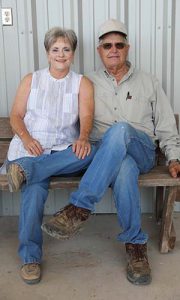 Growing up 30 miles from the nearest town with her brother and sister, Lee Anne learned first-hand how to work hard and make a good life.

“We didn’t have radio, we didn’t have television. We did have some play, but we mainly just worked,” she said. “I just feel so blessed to have been born into a ranching family and then married into a farming family. I am so blessed, it is just the best life. It is because of growing up in those places that made me who I am and what I think and believe in life – growing up on a farm and ranch has influenced that.”

On the Hutto ranch, being a girl was no excuse to escape work. Lee Anne and her sister were both taught from a very young age they could do anything their brother could do, whether that was working sheep or roping calves. This lesson was learned thanks to their father, Toots Hutto, who Lee Anne said was her biggest role model.

“I think my daddy had the most influence on me. He had a big personality,” she said. “He taught me so many things, and one of them was hard work. My sister and I, they never let us think that we didn’t have to do something because we were girls. We were expected to round up and we were expected to help mark our lambs and be in the pens. We did everything. There wasn’t one thing I didn’t think I could do, and to this day there’s still not one thing I don’t think I can do.” 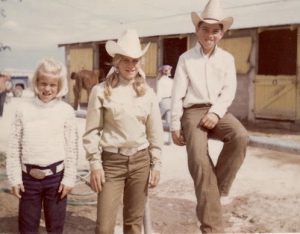 Lee Anne and her siblings, Toby and Roy Lee

After the chores on the ranch were done, Lee Anne would often head to rodeo practice in the evenings. Despite being a breakaway roper, she would go the full nine yards in practice to keep her horse in good habits for competition.

“We were required to rope our calf, get off and tie him down just like my brother did,” she said. “We were expected to do just what the guys did.”

The Winds of Change

As the years went by, Lee Anne married and had two children, Shelley and Sloan, and moved to Coahoma, Texas, near Big Spring. It was there that she was first introduced to row-crop farming on her father-in-law’s operation. When her husband was away at rodeos, she would help her father-in-law on the farm, putting to good use the skills she learned from her ranching childhood.

“I worked hard and helped his dad farm and do things,” Lee Anne said. “I learned how to mechanic and I learned how to drive a tractor, all the while raising my children.”

After some life changes, Lee Anne later moved to San Angelo, Texas, with the kids and went to work for the local Farm Service Agency office. Shelley and Sloan showed sheep from her father’s ranch through the local 4-H program and participated in sports during their time at Wall Independent School District. Life was simple for a while. When the year 1995 came around, though, the winds of change started to blow.

“In 1995, it was the worst year ever around here,” Lee Anne said. “We had a tornado that took out crops and roofs, and then a hail storm, then the beet army worm wiped out the crop.” As she continued, fighting back tears, she said, “Then my son, Sloan, he had just barely turned 16 and was killed on a trampoline.”

During this difficult time, it was Lee Anne’s past that helped her stay strong. Her father’s oldest brother and her uncle, Ray Hutto, gave her advice at the funeral that helped shape her future. “He came up to me after the funeral after we buried Sloan, he put his arm around me – he was this big, rough 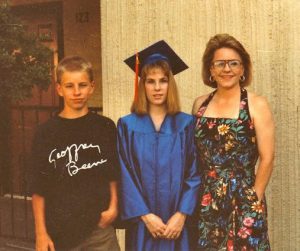 man – and he said, ‘Lee Anne, this is the hardest thing you are ever going to have to deal with, but you can handle it, you are a Hutto.’ He said you grew up on a ranch, you know about life, you can do this, you are tough,” she said reminiscently.

It was this advice that proved to be pivotal in Lee Anne’s life. Rather than turn to darkness in this time when it would have been easy to do so, she chose to keep going.

“I just picked up and said yeah, I can handle this, because there wasn’t one single thing on earth I could do to bring him back,” she said. “I was able to deal with it because of growing up on a ranch and being around the people that I had been around. I am just so thankful for the memories, and we still keep Sloan’s memory alive.”

Things got better for Lee Anne as time passed. Her work at the FSA office in San Angelo led her to meeting Larry, a local farmer and PCCA grower-owner. After dating and marrying years later, Lee Anne stopped working at the FSA office to help Larry with the farming operation.

“I wanted to do whatever I could to make his life easier,” Lee Anne said proudly. “We are small-time farmers, we jokingly say we are hobby farmers. All we have now is about 500 something acres of cropland out of about 600 acres. We do all the work ourselves.”

Lee Anne has worn many hats when it comes to carrying out farming responsibilities on their operation, from running the module builder and cutting stalks to driving the grain truck when they had milo, and everything in between. She also takes care of the books on the farm, certifies their crops at the FSA office, and handles their crop insurance.

“I love it. It is the challenge of it, there’s nothing I can’t do. I think I can do anything,” she said. “I just want to make life easier for my husband. We enjoy working together. We laugh about it because he says I don’t know how I ever farmed all those years without you, because he lets me tell him how to do it.”

Even though Lee Anne no longer works in the FSA office, she has still been able to keep her ties to the organization strong. Roughly 10 years ago, she was the first woman in Tom Green county to be elected to the FSA County Committee. She is currently serving her second term, bringing valuable advice and experience to the committee.

“It is farmers serving and helping farmers, and they are dependable,” she said. “That’s who we enjoy doing business with, and we wouldn’t even dream of taking our business anywhere else.”

A Way of Life, A Legacy

“I don’t see the work we do as being challenging,” Lee Anne said. “I mean it is work, but it is just a fact of life. We don’t have the fancy equipment or the newest equipment, but we have made a great life. We still work on all of it, and whenever Larry can’t fix it anymore that is when he will retire. I am just proud of the fact that we can do all of this, just the two of us.”

Lee Anne said even though her children and grandchildren probably will not come back to continue the farming operation, what is most important to her is not the land or the crops, but that she has left a legacy worth remembering.

“You know, I have thought about this a lot,” she said. “We have left our kids and our grandkids a legacy of hard work. The things that we learned growing up on the farm and ranch and the good qualities we have, we have passed that down to our kids. Even if they aren’t farming and ranching, they are still good kids. They are honest, they are hard workers, they are compassionate, and it is because of our lifestyle. So even though they won’t be farming and ranching, they will still be carrying on our legacy in some way.”

For the younger generations coming up in the farming and ranching world, Lee Anne offered some advice.

“Very few people in this world are farmers and ranchers, and it is just this opportunity to have this blessed, full life around amazing people,” she said. “Just grab hold of it and learn as much as you can from the people you are around and be appreciative of what you have and pay it forward. Learn as much as you can and then pass it on to the next generation. Just be in the moment and love what you are doing, and if not, try to find something else. Life isn’t long, its short.”