Haboob a Reminder of Need for Soil Conservation 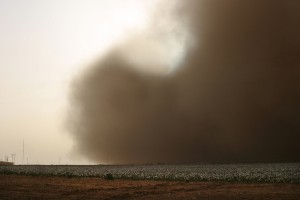 The extreme drought of 2011 pushed Lubbock, Texas, into the national headlines on Oct. 18 due to what meteorologists call a “haboob.”

A haboob is a giant wall of dust, dirt, and debris that can extend 8,000 feet into the air. These meteorological wonders typically are seen in arid, desert regions across the world and are caused when a thunderstorm or cold front downdraft collides with the earth’s surface. The magnitude of the 2011 haboob in West Texas was comparable to the dust storms of the 1930s.

The United States Department of Agriculture founded the Soil Conservation Service (SCS) in 1935, now known as Natural Resources Conservation Services (NRCS), during the height of the Dust Bowl to study and implement preventive measures for soil erosion due to wind. These practices include leaving last year’s crop residue in the field, reducing the number of times a field is plowed, planting cover crops or increasing ground cover, planting wind breaks, and utilizing rotational grazing to promote plant growth. The Conservation Reserve Program (CRP) also removed highly erodible land from cultivation. The towering-wall of dirt in October served as a reminder of how fast the weather can change and how drastically the weather impacts the environment.