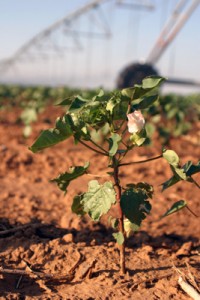 Despite the moisture of irrigation, much of the cotton on the Texas High Plains is stressed due to the extreme conditions resulting from a historic drought and higher than normal temperatures. Photo by Lynette Wilson

In 2011-12, the cotton producing acres in Plains Cotton Cooperative Association’s service area were at the epicenter of a once-in-a-generation drought stretching from Arizona to Florida.

Thanks mostly to a La Nina weather pattern, the eight months from October 2010 through May 2011 were the driest eight-month period on record for Texas since record keeping began in 1895, according to the National Oceanic Atmospheric Administration and the National Weather Service (NOAA/NWS).

The overall impact of the drought was staggering across the entire agricultural industry. The severe conditions spawned wildfires that turned grasslands to ash, caused winter wheat yields to plummet in Kansas, Oklahoma and Texas, and forced ranchers across the south to struggle to find feed for their cattle as pastures were parched.

In Texas, the leading cotton producer in the U.S., the crop languished in the heat as government sources classified 59 percent of the cotton crop to be in poor condition or worse in mid-July. Cotton plants across most of the Northern and Central portions of the state were withering under the strain of high temperatures, wind, and no measurable rainfall. Meanwhile, cotton conditions in Southern Texas were mixed as the drought claimed cotton in some areas while underground moisture accumulated from last year’s heavy rainfall saved the crop in other locations.

NOAA/NWS explained the seriousness of the situation in July by reporting that in many locations, including West Texas, it would require more than twice the average seasonal precipitation over the next three months to end the historic drought.

For the first time ever, the Texas High Plains was expected to report near 100 percent abandonment of dryland cotton acreage. Some producers shifted water from other crops to cotton, trying to salvage what they could of the 2011 irrigated crop, and made decisions that previous generations never had to face.

As the drought continued and the season progressed, USDA made revisions to its production figures. In the department’s July supply/demand report, U.S. crop prospects plunged to 16 million bales after a million-bale cut from the previous month’s report. The new figure was down 2.1 million from 2010 despite increased plantings. Abandonment throughout the U.S. Cotton Belt was projected at an all-time high of 30 percent, exceeding the prior record of 27 percent in 1933.

Harvested acres were expected to fall 10 percent from a year ago to 9.6 million, and yields remained projected at 800 pounds per acre compared to 812 pounds the prior year. Some industry analysts said crop conditions at the time of the report would seem to suggest the yield estimate still was overstated.

Global demand for cotton was lower in late July 2011, but industry observers were optimistic about the return of international buyers as well as the continuation of healthy cotton prices in the upcoming season. Both items were good news to those farmers fortunate enough to produce a cotton crop under the season’s extreme weather conditions.

“Demand for cotton has slacked off somewhat due to less demand from consumers in response to higher prices for cotton products, and in response to the slowing of purchases by textile mills because they had yarn sitting unspun in inventory and had to move it out before they would step in and buy again,” said an analyst.

“Even with Texas’ dismal crop outlook as a result of a severe ongoing drought, there will be an increase in world production and carryover this year, and that will probably keep prices from going back above $1.25,” he said. “But, I think we’ll still have ample opportunity to price cotton at $1 or more.”