Years ago, a young sleepy-eyed Jimmy Roppolo rose before the South Texas sun to help his father tend the family farm in High Bank, Texas. From changing the cotton irrigation water to caring for the cattle, horses, pigs and chickens before most other children were starting the day, Roppolo learned the value of a honest day’s work early on. Roppolo said one of his biggest promotions on the farm was getting to do the egg gathering, a not-so-small feat for a youngster just beginning his agricultural career. Little did he know that later on in life, he would soar to new heights in the co- op world, become a fightin’ Texas Aggie, weather spirit-strengthening storms, and finally find his way back home.

“I wouldn’t take anything for that upbringing,” Roppolo said, reminiscing. “It really kind of led me to what I do today – being a part of agriculture.” 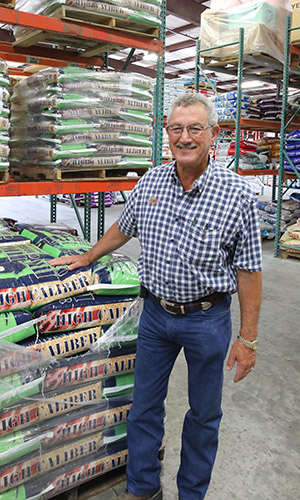 Much of Roppolo’s childhood reflected that of a small-town farm kid: working the family farm and helping carry his football team to the state championship his senior year. Upon his high school graduation, Roppolo began to think about what his future might hold and found himself at Texas A&M University in College Station, Texas – a school that he grew up an hour away from but was unfamiliar with. In an effort to get involved on campus, Roppolo joined the Corps of Cadets.

“It was really challenging to have a sophomore yelling in your face, but finally I got to the point where I couldn’t smile outwardly but I could smile inwardly and say ‘just keep hollering bud, you aren’t hurting me a bit,’ and it has helped me out in life a lot,” Roppolo said.

“Ag economics ended up being the key to me being where I am today,” he said. “I went to an ag eco meeting one night and there was a speaker there from Farmland Industries. He came in and started talking about co-ops at the meeting and I didn’t even know what a co-op was – never was raised around one. When he started talking about how when a co-op makes a profit the members are going to get money back I thought wow, this is the deal. That is what I want to do, I want to help farmers.”

The agricultural economics meeting during Roppolo’s undergraduate career proved to be a pivotal moment that would set the course for the rest of his professional life.

“I made the decision that night, actually, that if I was going to manage a co-op it was going to be in a small town and then hopefully one of these days I could have my horses again and have some cattle and not have to worry about fighting traffic,” Roppolo said. “That is really what led me here to the cooperative side. I got out of A&M and really pursued working for a cooperative.”

After graduating from Texas A&M, Roppolo entered into Farmland’s management training program in Bryan, Texas. Living life to the fullest for a year near his alma mater, he later filled an assistant manager position at a co-op in Baird, Texas, then earned his first management position at the age of 23.

After six years, Roppolo returned to Farmland Industries and worked as a field representative centered in El Campo, Texas. Having dealt heavily with the farm supply store side of the co-op business, Roppolo began to venture into field crops in the industry.

Working as a field representative during the week and a gin hand on the weekends, Roppolo successfully added cotton ginning experience to his resume, a skill that would come in handy in the not- so-distant future. 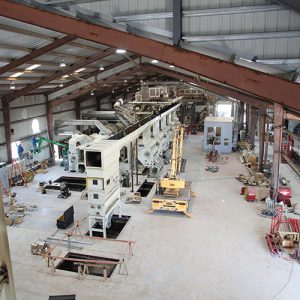 In the midst of the Danish community of Danevang and one of the largest farming areas in South Texas at the time, Roppolo worked primarily in the farm supply, agronomy, cotton gin and grain elevator areas. After working at Danevang for four years, he became their manager. Not long after in 1985, he began his long-term commitment of serving the agricultural producers of South Texas at United Ag, the El Campo-based cooperative he calls home.

By 2012, a total of four cooperatives from the El Campo area came together to form United Ag, a name that Roppolo was very mindful of selecting in order to unite the surrounding communities rather than divide them.

In December of this year, Roppolo will celebrate his 33rd anniversary at United Ag. He attributes the co-op’s success to surrounding himself with good friends and quality employees, even going so far as to hire a young man he met in a restaurant once because he gave a good first impression.

“I met a guy in a restaurant one day and hired him because I liked his attitude,” Roppolo said. “He was fixing to go to work for Monsanto as an intern. I just happened to see his Aggie ring and I introduced myself to him. We got to talking and I said if you are really serious about working in agronomy I would like to hire you. I just really try to find those types of people that care.”

Surrounding himself with good people does not only apply to employees. Roppolo said his 12-member board of directors votes on business decisions unanimously most of the time, showing that they too are united in upholding the best interest of their cooperative.

United Ag also has a desire for staying on the leading edge of technology. In 1987, Roppolo became concerned about specific moisture and trash levels of cotton coming through the gin. This led to the introduction of the Uster IntelliGin System to the co-op.

“About 95 percent of our producers use it and it is a cost, but I feel really good that our cotton has been ginned right and that we are getting the best quality,” he said, beaming with pride. “Our gin turnout has been about 42.5 percent and I think that stands up to any gin in the country. I think the IntelliGin system is what is doing that for us.”

The system also takes the risk of human error out of the decision making process when it comes to dealing with gin trash.

“It looks at the cotton loan chart and decides if it is better to leave a little bit more trash in the cotton bale and get more pounds of lint or if it is better to go through a second stage of lint cleaning and lose precious pounds of cotton. It makes that decision on the fly and surpasses a second lint cleaner if that puts more money in the producer’s pocket,” Roppolo said. “It makes that decision for us.”

The business ventures of United Ag do not end with the gin’s IntelliGin system. The cooperative is currently expanding its Danevang gin location, and has even put in a boutique, the Blue Creek Market, in its old El Campo farm supply store building. The cooperative has two cotton gins, four grain elevators, four farm supply stores, its own cotton warehouse location, a deer corn bagging plant, and is a certified Purina dealer with a feed mixing plant. All of the profits from these business ventures go back to benefit United Ag’s members.

More Than a Job

Roppolo has also taken his work well beyond the four walls of an office. In 2004, Roppolo was recognized as an Outstanding Alumini of Texas A&M College of Agriculture, and in 2011 received the Ginner of the Year award from the National Cotton Ginners Association.

“That is like over and beyond the Heisman Trophy deal,” Roppolo said, grinning from ear to ear. “I have this big problem, it is hard for me to tell people no so I am pretty busy most of the time. I get millions of phone calls, but I take pride in answering every phone call just as fast as I get it. I want our people to feel like they are important.”

Keeping his producers top-of-mind is a business trait that came in handy when the hurricane of all hurricanes, Harvey, pummeled what was supposed to be a record cotton crop for South Texas growers. Despite the wreckage the storm left behind, United Ag continued to persevere. After finishing ginning Harvey cotton in January, the cooperative was able to send out its insurance checks to farmers in June.

“We aim to please our producers in every way and we listen,” Roppolo said. “I think that is the biggest thing – knowing that we are a cooperative owned by the producers and we are here to serve them and pay them back profits. With the year we had here locally and with the year Gulf Compress and VALCO added to our ginning season, we are going to have an excellent financial year which is totally surprising, you know. I nearly get tears in my eyes thinking about all the effort that went into it and it went really well.”

After all the years and challenges Jimmy Roppolo has faced, his desire to take care of farmers has never wavered. The sleepy-eyed young boy who grew up working on his family farm before sunrise turned into the fightin’ Texas Aggie who was always at the ready to serve, and then became a revered professional in the co-op world. Today, Roppolo has made his home in the small town of El Campo where traffic is rarely a problem, has horses and raises Registered Brangus cattle in his spare time.