The Spotlights of Foreign and Domestic Film Crews Shine on PCCA 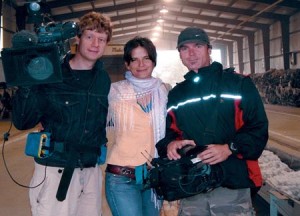 The cameras are rolling, the scripts have been written, and eyes all over the world are going to be on cotton. Two video crews visited the South Plains this fall to produce television programs related to both cotton and PCCA.

The first crew, from Germany, arrived in late September to tape an episode for a weekly program called Welt der Wunder, or World of Wonder. Similar to the Discovery Channel or Learning Channel, the program focuses on a certain topic and reaches as many as five million viewers per episode and has been running for more than nine years. The program is aired every Sunday in a primetime spot and is hailed as Europe’s leading science television production. With 400 episodes and 2,000 single films produced, adding cotton to the venue will gain great exposure for the fiber and PCCA, says John Johnson, the cooperative’s communications director.

“While many of us consider cotton an everyday part of our lives, cotton is not grown in Germany, and so many consumers there have never seen the entire process that creates the cotton apparel they wear,” Johnson says. “We took the crew to a cotton field in Crosby County where they videotaped cotton harvesting and interviewed PCCA member Jimmy Parkhill. We then followed the cotton all the way to our denim mill at Littlefield,” he continues. The crew also taped cotton classing and interviews at USDA’s classing office and the Texas Agriculture Experiment Station at Lubbock.

“The crew spent almost seven hours taping the entire denim manufacturing process at American Cotton Growers (ACG),” Johnson explains. “They were very interested in denim because it is just as popular in Germany as it is in the United States. We sincerely appreciate the National Cotton Council for letting PCCA be a part of this production.”

America’s Heartland, a new weekly public television show that celebrates the miracle of American agriculture and farm and ranch families, also became interested in the cotton industry this season. The program has been picked up by 150 stations around the nation with more than 40 million viewers. The series is being produced by KVIE, the public television affiliate in Sacramento, CA. The series’ two flagship supporters are Monsanto Company and the American Farm Bureau Federation. Additional production and promotion assistance is being provided by the National Cotton Council (NCC), the American Soybean Association, National Corn Growers Association, United Soybean Board and U.S. Grains Council.

“We are proud to collaborate with other U.S. agriculture groups to raise awareness of the significant contribution that agriculture makes to the quality of American living,” NCC Chairman Woods Eastland says. “America’s Heartland will help viewers better understand the nation’s farm and ranch families and the challenges and opportunities they face as they produce food and fiber for Americans and people in other countries.” The magazine-style, half-hour program profiles the people, places and products of U.S. agriculture.

“KVIE sent its video crew to the South Plains in mid-October to focus on PCCA and the cotton industry,” Johnson continues. “They were interested in PCCA because it is a farmer-owned cooperative that adds value to its members’ cotton via denim production.”

The PBS crew taped an interview with PCCA member Dahlen Hancock and shot harvest scenes on his farm in northern Lynn County. They also shot the ginning process at New Home Coop Gin.

“We spent an entire morning at our denim mill, and the crew taped the entire manufacturing process,” Johnson says. The crew also taped an interview with PCCA President and CEO Wally Darneille regarding the importance of the U.S. cotton industry and PCCA’s role.

“You cannot buy the kind of exposure U.S. cotton and PCCA will receive from these two programs,” Johnson adds. “When opportunities like these present themselves, we must take advantage of them. At a time when it seems our cotton and textile industries are under attack from all directions, it’s nice to receive positive publicity.”