Don Abbe, director of the American Museum of Agriculture and a 1914 model Moline tractor, one of the museum’s oldest.

Agriculture is and always has been a vital part of the U.S. economy and culture. With an ever-changing culture and technological advancement, preservation of the country’s agricultural heritage is becoming more and more important.

As a result, museums devoted to agriculture’s past, present and future are being erected across the country. Two such museums have been built in the heart of the Texas High Plains at Lubbock.

The American Wind Power Center and the American Museum of Agriculture are housed only a short distance from each other near Mackenzie State Park on Lubbock’s east side. 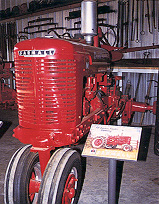 “We have two equally important missions for the museum,” says Abbe. “One is to educate the public about farming and agriculture, and the other is to preserve the physical remnants of the past.”

The museum is the home of many artifacts ranging from restored tractors to horse-drawn implements. Abbe says the collection is quite extensive and even includes smaller items such as old tool sets, farm toys and literature. In fact, the museum owns so many artifacts that most of them are still in storage due to a lack of space. The historical relics that are part of the museum come from people who just want to donate something they think would be of interest.

The museum currently is housed in the old American Wind Power Center, but the city has promised 25 acres of land north of the current location for expansion and a new building. Plans have been made to build a 75,000 square feet building and a farmstead complete with a house and chicken coops.

Abbe says the biggest obstacle in getting the new facility completed, and even underway, is funding. Currently, all funding has come from donations, memberships and charter memberships that have raised about $50,000 thus far. Abbe eventually hopes to receive money from other sources. Approximately $10 million is needed for everything planners want to do with the museum.

“It helps that we have a low-cost operation so we can hang in there with the money we’ve raised,” Abbe explains. “We’re trying to find more money from grants and local foundations.”

A twin wheel windmill made in the late 1920s now stands outside the American Wind Power Center. 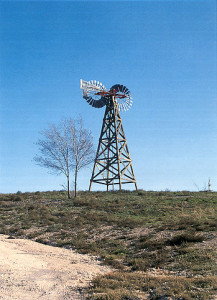 A twin wheel windmill made in the late 1920s now stands outside the American Wind Power Center.

There is no projected completion for the new building. It simply depends on when enough funds become available to construct the new facility. Any amount of donation to the museum is greatly appreciated, and Abbe says, it is vital to preserving agriculture’s past and educating the public for the industry’s future.

The American Museum of Agriculture is open Friday and Saturday from 10 a.m. to 5 p.m. Although there is no admission fee to tour the museum, Abbe says a $3 donation from museum visitors is requested.

Just a short distance from the American Museum of Agriculture, is the American Wind Power Center. According to the center’s Web site, a non-profit organization was established in 1993 to acquire restored windmills. The city of Lubbock provided 28 acres of land as well as some buildings for indoor exhibits.

Like tractors and other pieces of farm equipment, windmills long have been a landmark in rural agricultural areas. Coy Harris, executive director of the American Wind Power Center, says windmills provided access to underground water sources that allowed livestock and farmers to live in places where there was a shortage of surface water supplies. This development was very important to the settlement of many Texas regions. 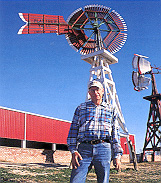 “If you wanted to come to Texas and live in this area, you had to have a windmill,” says Harris. “Windmills were very important to farmers and ranchers to provide water for livestock and even their families before electricity was available.”

Harris says the American Wind Power Center has the world’s largest collection of historic windmills and now displays 110 of them. The center is home to many rare windmills that are housed indoors. Other windmills are outside, and many even have pumps and tanks. The oldest windmill at the center in an 1868 Halladay Standard, and says Harris, the center displays both the largest and smallest windmills in North America. The center acquires windmills from collectors, well drillers and families who own or find old windmills and want to donate them.

The 28-acre site provided by the city provides plenty of space for the center; however, Harris says more buildings are needed to house some of the windmills. The biggest obstacle, though, is funding.

“Most of our funding comes from donations,” says Harris. “We have one fundraiser each year, and we also raise money through memberships, people sponsoring windmills and the Windsmith Store that’s at the center.” 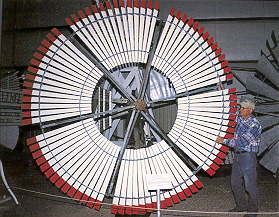 The American Wind Power Center is open Tuesday through Saturday from 10 a.m. to 5 p.m. There is no cover charge, but a $2 donation is requested.

“The purpose of the American Wind Power Center is to preserve part of our cultural and agricultural heritage and to simply display the beauty of the windmills themselves,” says Harris.

In a letter to George Washington, Thomas Jefferson once wrote, “Agriculture is our wisest pursuit, because it will in the end contribute most to real wealth, good morals, and happiness.” Agriculture is as important today as it was in 1787, and the American Museum of Agriculture and American Wind Power Center are two examples of how local people are working to preserve this important part of our past.