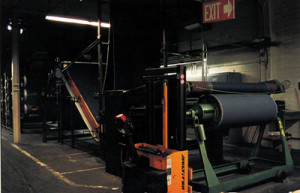 Plains Cotton Cooperative Association (PCCA) has seen an amazing turnaround in demand for its denim thus far in 2002. It is long-awaited and welcome news for the cooperative’s Textile Division.

Cheap imports of Asian textiles and apparel, made less expensive by a strong U.S. dollar, forced PCCA to make drastic changes in its Textile Division last year. First, the cooperative exited the yarn-dyed, woven fabrics business, cut 370 management, sales and production jobs in New Braunfels, Texas, and converted the cooperative’s textile plant there to a spinning, denim weaving and finishing operation in mid-2001.

Then, a weak U.S. economy and softening denim demand were exacerbated by the Sept. 11 terrorist attacks. The declining denim sales necessitated additional job cuts at New Braunfels in late November, relocation of all denim weaving functions to PCCA’s American Cotton Growers plant in Littlefield, Texas, and additional down time before the end of the year. Now, both plants are running at full production levels, and it should continue at least through the end of the second quarter on June 30. Low denim prices and accumulated losses thus far, however, will result in another loss for the Textile Division at fiscal year end. Nevertheless, PCCA’s plan that was implemented in late 2001 is working.

“Our goal for the first quarter was to produce and sell 8.7 million linear yards of denim to keep our plants running and get a better handle on production costs,” PCCA President and CEO Van May says. “However, actual sales greatly exceeded that goal, and second quarter sales topped out at 10.5 million yards.” By working as a team, PCCA’s textile operations in Littlefield and New Braunfels have met the challenges presented by the surging demand.

“There were some people who thought we should have completely shut down the New Braunfels facility last year,” May continues, “but the fact is, we could not meet the current demand without both of our plants.” The New Braunfels plant’s capacity to manufacture both ring and open-end yarn and to finish wider cloth that cannot be handled in Littlefield has played a major role. Another asset of the New Braunfels operation is new product development.

Not content with the status quo, PCCA’s sales, development and production personnel have worked diligently for weeks to finalize new styles, finishing and dyeing techniques that will boost denim sales opportunities for both the short and long term. Much of the work can be done only at the New Braunfels plant.

“We are finalizing a new finishing process for one of our customers that could result in very significant denim sales beginning in the third quarter of this year,” PCCA Vice President of Operations Darryl Lindsey reported in late March. “We are using a prep range in New Braunfels that had been idle since we left the yarn-dyed fabric business last year,” he added. Bryan Gregory, plant manager for both of PCCA’s textile facilities, also is optimistic.

“The New Braunfels plant gives us the ability to put finishes on fabric that are outside the traditional 02 denim finish we do in Littlefield,” he explains. “Thus, we can be more flexible and creative which gives us an opportunity to increase our share of the denim market. Without New Braunfels, we would completely miss these opportunities,” Gregory adds.

PCCA personnel also are perfecting a finishing process for stretch denim containing Lycra that has become popular, especially among female consumers. Meanwhile, the prep range in New Braunfels also can be used for over-dyeing denim if customers require such products.

All indications are tough decisions made in 2001 and aggressive plans for 2002 are beginning to pay off with increased denim manufacturing volume for PCCA’s Textile Division. As soon as denim prices improve, the cooperative will be in position to capitalize on its increased market share and return to profitability.