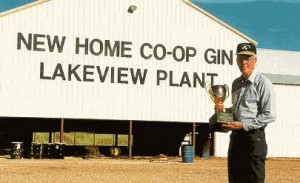 “It’s truly a humbling experience to receive such an award,” says Beck. “This is the big one; I can’t stop grinning. I probably even grin in my sleep.”

The award is presented to the ginner(s) for outstanding leadership to the U.S. cotton industry, superior customer service and civic contributions.

His career started with a bookkeeping job in 1966 at Farmers Coop Gin and Elevator in Littlefield, TX. He then moved up to become the assistant manager at Crosbyton Farmers Coop in 1970.

In 1972, Beck and his family made a move to Hackberry Coop Gin where he more than doubled the average annualvolume. In 1978, he assumed management of Lubbock Cotton Growers Gin where he significantly expanded output by consolidating two plants.

Two years ago, the Becks moved again, this time to New Home, TX, where he filled the position of gin manager of the New Home Coop Gin. There, he has continued to be known and respected by his customers for his commitment to quality ginning.

“The people of West Texas, especially those in its cotton industry, have been good to me,” says Beck. “They have given me a lot of opportunities and are a big part of this award.”

Beck recognizes his family, friends and hard working employees for their support in his career and realizes that without their support the award would not have been possible to achieve.

“This is the big one,” Beck says again with a smile, shaking his head almost in disbelief. “You can’t get much better than that.”