The Board of Directors of Plains Cotton Cooperative Association (PCCA) named Wallace L. “Wally” Darneille as president-elect of the Lubbock-based, farmer-owned cooperative effective July 6, 2004. The announcement was made by recently-elected PCCA Chairman Eddie Smith following the board’s regular, monthly meeting on June 16, 2004. Darneille will replace Van May who announced late last year his intention to step down as head of PCCA this summer. Following a brief transition period, Darneille will officially succeed May as president and CEO on Septmeber 1, 2004. 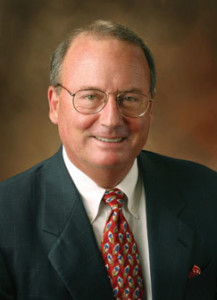 “We are excited to have someone with Wally’s depth of experience in cotton,” stated Smith. “His background is a very good fit for our organization.”

While employed with Weil Brothers Cotton, Inc., Darneille, who is completely fluent in Spanish, was involved with a number of international ventures. He also has extensive experience in cotton pool activities. He was a key member of the team that created and managed Beltwide Cotton Cooperative which has grown to become the fourth largest cotton marketing cooperative in the United States with six separate marketing pools encompassing the U.S. Cotton Belt.

Darneille has been a frequent speaker at various cotton organization meetings including the Texas Cotton Association and National Cotton Council (NCC) Beltwide Cotton Conferences regarding market outlooks and marketing strategies. He also has met with producer groups throughout the Cotton Belt to promote cooperative membership. A frequent visitor to Washington, D.C., Darneille has met with congressmen and various officials at USDA concerning issues related to farm programs, payment limitations and GSM programs.

Darneille also has been very active in trade organizations. He has served two terms on the American Cotton Shippers’ Association Board of Directors, and he was the first American elected to full membership on the Liverpool Cotton Association’s Board of Directors where he is completing his third term. He was a member of various Cotton Council International (CCI) delegations promoting U.S. cotton in export markets and currently is vice president of the World Cotton Exporters’ Association. As former president of the Texas Cotton Association, Darneille is well versed in the geographic area in which he will now serve.

“I am very excited about this opportunity,” Darneille said. “PCCA is highly respected worldwide in cotton and textile circles, and I intend to continue its long history of success. I can’t wait to get to Lubbock and get started,” he added.

Not only has Darneille had a stellar career in the cotton business, he also is an entrepreneur. Discouraged by the lack of American-produced cotton clothing, Darneille decided to try a new venture with the help of his wife Margy. They realized a great number of textile jobs were moving offshore, and it was becoming difficult to find American-made apparel. With their connection to the cotton industry, and their pride in America, they felt they should do something to help.

“We’re just trying to save the textile industry one shirt at a time,” said Margy who runs the venture. Last year, the Darneilles spent time speaking with PCCA President and CEO Van May about the decline in the U.S. textile industry.

“Van is a remarkable thinker and leader,” Margy said. “He very simply outlined a problem that seemed to have eluded us.” May stressed the need to support U.S. textiles and inspired the Darneilles to begin researching products that were 100 percent cotton and made in the United States.

“It took a good year to find shirt-weight denim made in the U.S.,” Margy said. The Darneilles contracted with domestic cut-and-sew operations to make apparel from fabric made in the United States using U.S. cotton. In December 2003, they began production of their All American, All Cotton shirts.

“We are starting small,” she added, “but we hope to grow to the point that the public will take notice of the importance of supporting the U.S. textile industry and our farmers.”

“Our business is a combination of loving the cotton industry and loving our country,” Margy said. “We certainly cannot stem the tide of textile jobs flowing offshore, but at least we may be able to preserve some pride in the ‘made in America’ concept.”

Outgoing President and CEO Van May, a 1975 graduate of Texas Tech University, practiced public accounting in Lubbock prior to joining PCCA in 1978. After holding numerous positions at the cooperative, he was named PCCA’s executive vice president in 1989 and became president and chief executive officer in 1992.

“Van’s foresight enabled PCCA’s Textile Division to expand its customer base and position it for future growth opportunities,” Smith explained. “The investments in and restructuring of our denim operation will be important as the world textile industry continues to experience enormous change.” PCCA’s cotton marketing efforts also made significant advancements in recent years with the establishment of The Seam, the world’s first, truly online cotton marketplace.

“PCCA was one of the founding partners in The Seam in late 2000,” Smith commented, “and our TELCOT system became the foundation for the new company’s online cotton marketing system. This development increased the number of buyers competing for PCCA members’ cotton to help ensure they receive the best possible price.”

“Having spent 26 years of my career at PCCA, I obviously want to see it continue its leadership role and its success,” May explained. “I am excited that we were able to find someone with the qualifications of Wally Darneille to take the reins. He is joining a very talented team, and I know that PCCA will continue in good hands.”

The board’s announcement comes after completion of a nationwide search conducted by the highly regarded search firm of Kincannon & Reed headed up by former Texan Kelly Kincannon. “Frankly, we were very impressed with the quality of candidates that Kelly brought to the table,” Smith said. “He did a great job for us.”