Originally a Tool for Researchers 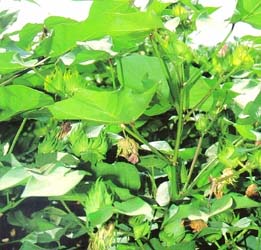 Editor’s Note: The following information is based on the performance of stripper cotton varieties in West Texas, yet the concept remains the same throughout the Cotton Belt. Some numbers or conditions may vary in different regions, so see your local agronomist or extension agent for more details.

Plant mapping was first developed as a tool for researchers to study cotton plant physiology, according to Lubbock County Extension Agent Mark Brown. However, it proved to be an adequate indicator of how plants performed relative to their environment and stress. Now, producers can use plant mapping to determine when to use such agronomic inputs as growth regulators, defoliants and even irrigation. Brown is quick to warn that plant mapping should not replace consultant field scouting for insect control. However, he says mapping is similar to field scouting because it takes time, knowledge and skill.

The most critical period of time during the life of the plant is from when squares first appear to the first flower, says Dr. Randy Boman, cotton agronomist with the Texas Agricultural Extension Service. Stress during this time “will limit the potential fruit number,” he says. Percentage of square set , main stem node location of the first fruiting branch and height-to- node ratio are factors that indicate if the plant is stressed during this time. 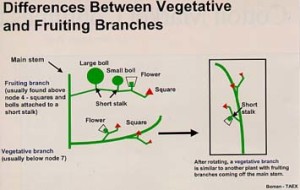 The next plant stage evaluated by mapping is early bloom. In this stage, boll set and plant vigor, or yield-potential, are evaluated. For the abbreviated plant mapping method, the fruit in the first position on fruiting branches is the main concern. (See graphic for difference between fruiting and vegetative branches.)

This is due to the fact first position fruit is easily and very quickly counted and serves to obtain an adequate observation of the crop. For normally- fruited, irrigated cotton, around 75 percent of the potential production on the cotton plant comes from the first position fruit, Boman says.

Nodes, or “bumps,” on the main stem also are observed to determine the vigor of the plant. Length between the nodes, known as internode length, indicates the status of the plant in relation to stress and type of growth. The number of mainstem nodes to the terminal, which is the uppermost node with a leaf that is at least an inch in diameter, above a first position white flower is an indicator of crop yield potential and vigor, according to Boman. These nodes are known as Nodes Above White Flower or NAWF. (See Nodes Above White Flower at Early Bloom diagram.) 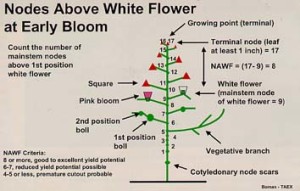 “Normally, for stripper-type varieties, we expect a minimally stressed crop to have at least eight or more NAWF at first bloom,” Boman says. “Premature cutout is probable as NAWF declines to 4 or 5, especially with short-season varieties, unless sufficient irrigation is applied or rainfall is received to keep the plants vigorous.”

Plant mapping in the early bloom stage can give a producer clues for determining if and when to use growth regulators. Aside from counting the NAWF, if internode length is excessive, the plant is putting too much effort into growing vegetatively. Growth regulators can be applied to steer the plant back toward reproductive growth.

The ultimate goal of plant mapping is to manage the crop for earliness by pushing the plants to maturity.

“Plant mapping is a good management tool all season long,” Brown says. “Even if you have been farming for 20 years, you still can learn more about the physiology of your crop and how to manage it.” Brown also notes that historical patterns can be developed from plant mapping records kept throughout the years and used in better management.

“Plant mapping is like swimming,” Brown says. “You can tell someone how to do it, but until they jump in the water and gain the necessary experience, knowledge and skill, it is difficult to utilize.” Brown suggests that producers learn plant mapping by attending seminars about the subject and meeting with experts in the field such as agronomists or extension agents.