Respect and Hard Work Pay Off For Stamford Gin Manager

Rex Ford Receives The 2014 TCGA Ginner of the Year Award 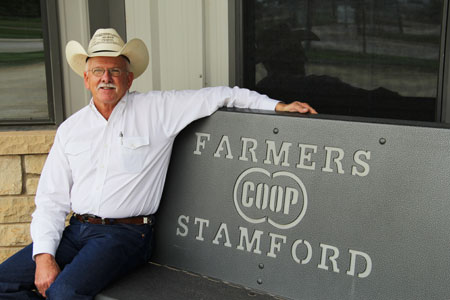 Many people live their lives based on a personal philosophy that helps guide them. For Rex Ford, Farmers Co-op Stamford gin manager, the saying “treat people the way you would want to be treated” has been a phrase that he has lived by since he was a boy, and it is evident that it has played a huge role in how he has reached his success.

“If you treat people with kindness and respect,” Ford said, “most of the time they will give you 150 percent in return.” Ford’s attitude and respect has not gone unnoticed. In April 2015, he received the Cotton Ginner of the Year Award at the Texas Cotton Ginner’s Association (TCGA) annual awards banquet.

Ford grew up 15 miles southeast of Stamford in the small town of Lueders. After graduation, he went on to study agricultural economics at Tarleton State University in Stephenville, Texas. After college, he began working at Farmers State Bank as a cashier and eventually worked his way up to president of the bank until he left in 1985. He then farmed for many years and worked for a John Deere dealership until 1990. After another go at farming, Ford started to realize that he missed being around people and co-workers. As a result, in 1992 he accepted the position as gin manager at Farmers Co-op.

Family is a huge factor in Ford’s life. In 1980, he married his wife, Cindy, who works as a registered nurse at the local school district. Rex and Cindy have three daughters, Tiffany Ford, Tara Ford and Tristan Lawson. Tiffany is a school principal in Lubbock and has a daughter named Shelby who is a freshman at Frenship High School. Tara is a dental assistant in Abilene, and their youngest, Tristan, and her husband Cody, have three children, Breck, who is eight, Charli Kate, six, and a six-week-old baby girl named Dalli Paige.

Rex’s parents and family made a living farming and ranching. Since being raised in production agriculture, Ford knew he wanted to work in the industry someday. He grew up around cotton gins, and he knew as a gin manager he could combine his passions for agriculture and working with people.

“I have been around agriculture my whole life,” Ford said. “I just enjoy being around farmers and people, and I knew that someday that’s what I wanted to do.”

As gin manager, Ford wears many hats. His roles include overseeing the operations of the gin as well as maintaining good public relations. However, Ford said he relies on his employees in order to run a successful business. He has a gin superintendent, an office manager, interns, and several other employees who play a vital role in running the business effectively.

“I’m only as good as my employees so I try to surround myself with good people,” said Ford, “and I have been very fortunate to be able to do that here.”

Ford loves every part of his job, but he says his favorite part is the public relations side of it. He enjoys visiting with customers and learning more about what is going on at their farms.

“I try to do more listening than I do talking so I know what their needs are and what I need to make happen to help them,” said Ford.

He says the most challenging part of the job is during the ginning season when he oversees the gin while it runs for many months. Ford also makes it a priority to stay involved with organizations such as Plains Cotton Cooperative Association (PCCA) and Texas Agricultural Cooperative Council. Ford says that PCCA has played a huge role in the success of his gin and his office.

“I would hate to run a coop gin without PCCA,” said Ford. “They do great things for us beginning in the office and all the way through the marketing of the cotton.”

He says the biggest benefit with working with PCCA is the ease in marketing, and that it makes their jobs much more enjoyable andeasier when it comes time to market cotton. He likes the fact PCCA ensures that his customers will always get the best possible return on their cotton.

He also strives to keep good relationships with other gin managers across the state of Texas. He said he enjoys the friendships he has made and values their ability to work together.

“I have learned more from visiting with other gin managers than I ever did in school,” Ford said. “I like being able to learn from each other and compare how they do things to how I do it.”

Ford’s relationship with the gin managers in the state has proven to be a worthy one as he was awarded the prestigious ginner of the year award. Ford was selected for the award due to his accomplishments and the success he has helped to bring to his gin.

“Receiving the award blindsided me like I’ve never been blindsided before,” said Ford. “I never thought about getting it, so it was very humbling that the ginners in the state of Texas would do that for me.”

Ford credits his background in agriculture and growing up in this atmosphere to getting him to where he is today. He also said that his past work experiences have taught him lessons and given him skills that have helped him. He said the most influential person in his life has been his dad. His father was a farmer as well, and Ford described him as a quiet, understanding man who was instrumental in helping steer his path in life and develop who he is today.

Although he is very proud of this award, Ford said his proudest moments in life are when he married his wife, had children, and when he was blessed with grandchildren.

When he isn’t working, Ford can be found spending time with his family, working with his horses or cattle, spending the day on the water boating or waterskiing, roping, and raising border collies.

“I tell everyone my hobby is my farm. I enjoy being around my cows,” he said. “I also love to spend time with my grandkids.”

Good things are still to come for Ford as he looks forward to the future. He wants to continue improving the Stamford gin while keeping up with innovations and technology in agriculture, and then after another seven to eight years, he plans to go into a much-deserved retirement.

“I love what I do, but I don’t want to stay longer than I need to,” said Ford. “I am in no hurry to retire, but I am looking forward to spending time with my family and being on the farm.”

There is no doubt that Rex Ford will continue to be an influence on the Texas cotton industry even after his retirement. His kindness, respect and loyalty have distinguished him as a man who genuinely embodies what it means to be an agriculturalist. He has played a huge part in bringing Farmers Co-op Stamford to the degree of success that it is at today. Ford thanks his family, board of directors, employees, and cotton ginners across the state for providing him this very humbling experience.