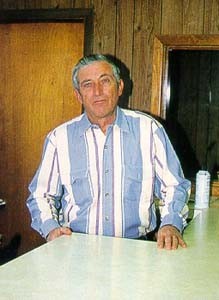 Four decades of service to Texas cotton producers was recognized recently when Wilson Coop Gin Manager Ronnie Nettles was named the 1998 Ginner of the Year by the Texas Cotton Ginners’ Association (TCGA). The award is the highest honor given by the association to people who have proven their dedication to the cotton industry, their customers and their communities.

For Nettles, who was “very surprised” upon being named Ginner of the Year, the award represents what he strives for every year, with or without recognition.

“I don’t look for awards. If they come, that’s great, but I just work hard and try to always do a good job,” Nettles says. While the award is an important milestone in his career, Nettles says he feels like ginner of the year every year that he delivers a quality turnout and dividends for his members.

“The satisfaction of the customers is the most important thing to me,” Nettles adds.

Nettles began his long tradition of excellence in the cotton industry in 1957 at the Pendergrass Gin in Wellman, TX, working there until 1962 when he accepted a job at the Hobbs Gin in New Deal, TX. When the farmers bought out the gin, Nettles became the first manager of the New Deal Coop Gin. He also served as manager of the Spade and Tahoka Coop gins before becoming the manager of the Wilson Coop in the spring of 1976.

Under Nettles’ leadership, the gin at Wilson has stayed competitive, updating its facilities from a small two-plant operation to a high capacity facility. Wilson Coop began renovations in 1989, and as Nettles says, continues “to do our best to build a modern gin, but to do it in the least time possible, and to do it with the least amount of debt.”

Nettles’ broad involvement in all aspects of the cotton industry is represented by his involvement in the establishment and continued operation of the American Cotton Growers (ACG) denim mill, now a division of PCCA. He has served as the president of the Plains Coop Managers’ Association as well as the chairman of the coop gins’ retirement plan.

Nettles is known by his customers as a conscientious manager. He encourages them to utilize the facilities available to them as cooperative members in order to increase their profits and yields through effective farm management and marketing practices. His reputation for fairness and honesty, as well as his knowledge of the technical aspects of ginning procedures and machinery are recognized by many in the industry.

Nettles’ involvement in cotton is matched by his service to his community and family. He serves as a deacon of the First Baptist Church in Wilson and is very involved with the Lions Club, where he has served as president. His many accomplishments were recognized by the Lions Club when they named him Wilson’s Citizen of the Year in 1991. Nettles and his wife, Bertha, have two children, Debbie May and Mike Nettles, as well as two grandchildren, Blake May and Nicole Nettles.

Nettles is a strong supporter of the youth in his community through 4-H and FFA, both personally and as a representative of the gin. He is involved with area livestock shows and sales and serves as the Wilson Livestock Association chairman.

Although Nettles modestly says he “wasn’t expecting it (Ginner of the Year) at all,” his forty years of experience in the cotton industry speak for themselves. To all who know him, Nettles is truly deserving of the award.