PCCA Members and Cotton Board Contribute to Soldier Care Packages 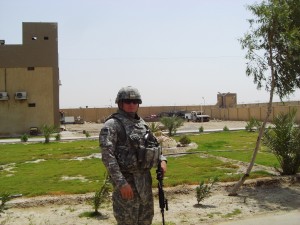 PCCA members Guy and Kayla Morrison of Lubbock played a big role in making many soldiers in Iraq feel more comfortable this past holiday season. Their son, 2nd Lt. Cole Morrison, is a platoon leader in Bandog Company which is part of a Cavalry unit based at Fort Hood, Texas.

Kayla said she and her husband were accustomed to sending their son care packages “about once a week” containing things he requested because they were not readily available to him at the base in Iraq.

“Cole mentioned how many of the soldiers didn’t get boxes and how his company was out of a number of personal hygiene products,” Kayla said.

Kayla, with the help of her parents and daughter-in-law Britt’n Morrison conceived the idea of making Christmas stockings for the entire Bandog Company. At their request, United Supermarkets donated items for the stockings. Family friend Rick King of Slaton heard about the effort and thought of the Cotton Board’s popular lip balm. He contacted the Cotton Board’s Southwest Regional Communication Manager, Bob Stanley, who agreed to donate as much lip balm as necessary. 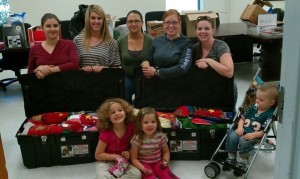 Cole’s wife, Britt’n (second from left) and fellow soldiers’ wives and children with care packages they created to send to Afghanistan.

“Four other soldiers’ wives, Britt’n and I stuffed 130 Christmas stockings and prepared them to ship to Iraq for Bandog Company,” Kayla said.

The elementary school at Roosevelt Independent School District, where Kayla works as assistant superintendent, also participated by donating jerky, books, toiletries, stationery, and food items for the stockings. Leftover items were saved for friends whose husbands are deployed to Afghanistan.

It was another awesome display of appreciation from the cotton industry benefiting our troops and thanking them for their service to our country.