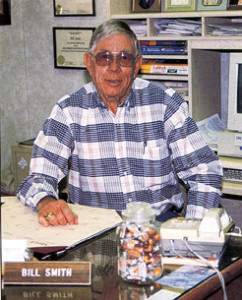 Bill Smith, State Line Cooperative Gin manager, was named the 2001 Ginner of the Year by the Texas Agricultural Cooperative Council (TACC). On March 12, 2002, Smith received the award, one of TACC’s highest honors, for his dedication to cooperatives and agriculture at the council’s annual meeting in Corpus Christi, Texas.

Smith grew up on his family’s farm in Floydada, Texas, where his parents fostered a love of agriculture and a fondness for the West Texas area. After graduating from Floydada High School, Smith received a bachelor’s degree in industrial arts with a minor in agriculture from West Texas State University in Canyon, Texas. While attending college, he met his wife Pat.

Already a knowledgeable and experienced cooperative gin manager, Smith came to State Line Cooperative Gin in 1989. At that time, the gin averaged only 9,000 bales annually; however, gradual improvements and modernization allowed the gin to double its average number of bales in just 13 years under his direction. At the same time, the financial health of the cooperative remained strong, and stock revolvement is down to seven years.

Glowing letters of support sent to TACC on Smith’s behalf describe him as a good Christian, hard working, humble and unassuming.

“Although he is a man of few words, Bill has great respect from his patrons, peers and community,” according to Ron Harkey, general manager of Farmers Cooperative Compress. “He is progressive and will do whatever it takes to make his customers more profitable. He is in a very competitive area with strong, independent gin pressure but does an excellent job in meeting the competition head-on.”

“The Texas Agricultural Cooperative Council is certainly blessed if just one person is more deserving of this award than Bill,” Dreyspring’s letter concluded.

“Dr. Smith’s greatest contribution to cooperatives in Texas has been the vision and leadership he has provided that has allowed TACC to serve as a forum or vehicle by which all agricultural cooperative work performed by the Texas Agricultural Extension Service can be coordinated,” said Tommy Engelke, TACC executive vice president.

“This method of performing extension cooperative work, through a catalyst like TACC, eliminates the need to create another bureaucracy serving agricultural cooperatives,” Engelke explained.

“Jack has put out more fires on behalf of our cause, has killed more rules and regulations than most would dream possible and has seen to it that agriculture has a major place in the economy of this state,” said Humberto Vela, manager of Rio Grande Valley Sugar Growers.