Above and Beyond: TACC Honors Exceptional Individuals

Each year, the Texas Agricultural Cooperative Council honors individuals who go above and beyond the call of duty in their respective areas of work. This year, honorees include Danny Helms of PCCA, David Wied of New Home Co-op Gin, Johnny Anderson of Plains Cotton Growers, Darwin Robertson of Yoakum County Co-op, and Bob Stanley of The Cotton Board. Rising above the challenges that the cooperative cotton industry often presents, each individual has done everything in his power to provide the best service possible to growers, making the industry better for it. 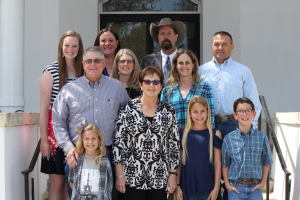 Danny Helms – Cooperator of The Year

A native of Snyder, Texas, and Sweetwater, Texas, transplant, Danny Helms has let his cooperative spirit shine ever since he embarked on his professional career journey. After graduating from Western Texas College, Helms began working at Hobbs Co-op Gin near Rotan, Texas, and eventually worked his way up to manager. He later joined the PCCA family in 1988 as a field representative for the Rolling Plains. In 2007, Helms was named manager of PCCA’s Rolling Plains Cooperative Compress. Following the consolidation of PCCA warehouses into one division, Helms was named South Region Manager. Today, he oversees operations in the Sweetwater, Big Spring and Rule warehouse locations and is an integral part of keeping the needs and wants of cotton merchants and textile mills satisfied.

“His dedication, talents, and contributions to the cooperative system are unsurpassed,” he said. “I can safely say no one is more committed to cooperatives and the way they do business.”

Helms also is a pillar of the Sweetwater community, serving on the board of directors for Big Country Electric Cooperative as well as maintaining membership with the Baptist church and local Masonic Lodge. Helms also has served many years as a director on the TACC board. Helms and his wife, Janna, have been married since 1977. Together, they have three children and four grandchildren.

“Danny is on the front line and working alongside his employees to ensure the warehouses are adding value to our grower- owners’ cotton.”

Jay Cowart, PCCA Vice President of Warehouse Operations, also spoke to Helm’s character and deservedness of the Cooperator of The Year Award.

“I have worked with Danny for many years and have always been impressed by the level of respect that he has from the folks at the gins and from our members,” Cowart said. “He is very dedicated to PCCA, the cotton industry and his community at large.” 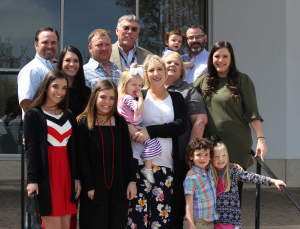 As the manager of New Home Co-op Gin, David Wied knows the importance of progress and leadership. Since having started in his position in July of 2003, Wied has doubled the gin’s capacity with improvements made before each harvest season. Wied also farms in a partnership with his brother. Together they deliver their cotton to a cooperative gin and are PCCA grower-owners. As he understands the importance of being involved in each level of the cooperative supply chain, Wied often encourages his members to do the same.

Buzz Cooper, manager of Texas Star Co-op Gin, said Wied has always been known as a man of his word.

“His character is above reproach,” he said, “he is a man of his word and completely loyal to patrons, friends and family. His peers look up to him and have deep respect for everything he has done for the cooperative ideal.”

Professionally, Wied has served the Texas Cotton Ginners Association, the National Cotton Council and on the TACC and Wilson Co-op Gin boards. In the community of Wilson, Wied has served as a deacon at the First Baptist Church and on the local school board, in addition to supporting the Bayer Museum of Agriculture and participating in the Wilson Lions Club. After graduating high school in the early 1970s, Wied earned his degree in Agricultural Education from Texas Tech University. He and wife Nan have three daughters and six grandchildren. 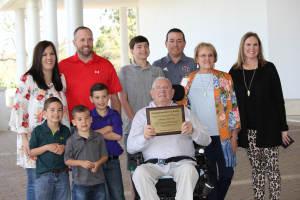 For over 30 years, Johnny Anderson faithfully served as the eld representative for Plains Cotton Growers, Inc. Travelling over a million miles, Anderson always worked to make sure his gins were taken care of, often rising before the sun so he could have a cup of coffee with gin personnel across PCG’s service area. Part of Anderson’s innate ability to serve growers and gins so well was that he too has a farming background. Prior to working for PCG, Anderson farmed roughly 2,000 acres of dryland cotton with his father. When the boll weevil crisis struck the cotton industry, Anderson went to work for the High Plains eradication program in 1971. It was after this experience that he joined the PCG family in 1986. As he faithfully carried out his duties, even during the worst of times in the cotton industry, Anderson earned a rare level of respect and admiration from his peers.

“Faithful. Dependable. Knowledgeable,” he said, “Those are just three words used to describe this year’s Distinguished Service Award winner, and I think gin managers and cotton industry leaders across the state would vouch for all of those in Johnny Anderson.”

Johnny and his wife Janney, who served as a bookkeeper at Slaton Co-op Gin, are both retired. The couple has two children and four grandsons. 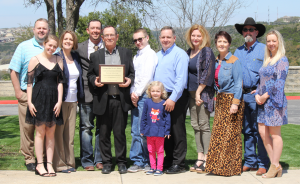 Darwin Robertson was born in Vernon, Texas. As a farmer and rancher who often moved between small towns across the Texas / New Mexico border, he spent his entire life in agriculture. Robertson is currently a member of TACC and has served on the board of directors for many years, in addition to having served on the Maple Co-op Gin and Three Way ISD board of directors. No matter where he resided, Robertson was always a strong supporter of the local FFA chapters. In the late 1980s, he accepted a position as the Plant Supervisor for Maple Co-op Gin, then later accepted the general manager position at Yoakum County Co-op. After a few years there, Robertson was offered the manager position at Muleshoe Co-op Gin and worked there for a short time as well. Eventually, Yoakum County began calling him home, and he returned. For the last 10 years, Robertson served as the general manager prior to his retirement in 2017.

D.J. Robertson, Darwin’s son and manager of Yoakum County Co-op, said the agricultural industry has been his father’s life’s work.

“Dad, I think I speak on behalf of the entire cooperative community when I simply say thank you,” he said. “Your dedication to the industry, your hard work, and exceptional talent has not gone unnoticed and will not soon be forgotten. You are a valuable friend to the farmer and have been an asset to the co-op industry.”

After 36 years of marriage, Robertson lost his beloved wife Mary Ellen to her courageous battle with cancer. Together, the couple has five children, one of which, D.J., has filled his father’s shoes as well as his former position at Yoakum County Co-op. Robertson is admired in the industry for his years of dedication and talent. 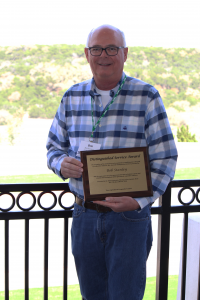 Bob Stanley, who recently retired as the Southwest Regional Communications Manager for the Cotton Board, has spent a lifetime in the cotton industry. Stanley grew up on a cotton and grain farm in Crosby County, Texas, and graduated from Lorenzo High School where he was class president and very active in the FFA. Following graduation, Stanley enlisted in the U.S. Army and served one tour in Vietnam as an infantry squad leader. In this position, he was responsible for the combat operations of eight to 12 soldiers. Prior to his honorable discharge at the Rank of Sargent E-5, he was awarded the Air Medal and Bronze Star. In 1972 after Stanley completed his military service, he attended Texas Tech University and was an active member of the U.S. Army Reserve. Stanley also spent more than 30 years selling and building cotton gins across the country. After making a career change, Stanley joined The Cotton Board and retired in 2017. Stanley and his wife Sue currently reside in Lubbock.