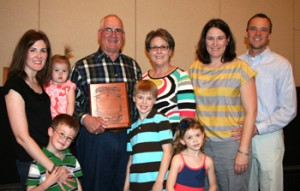 The Texas Agricultural Cooperative Council (TACC) recently recognized Jerry Multer of Wall Coop Gin as Ginner of the Year for his work and leadership in the cotton industry.

A 1967 graduate of Ballinger High School and a 1971 agricultural economics graduate of Texas A&M University, Multer has always been involved in agriculture.

After a short stint in the U.S. Air Force, Multer began working for the Marshall Production Credit Association in East Texas and two years later transferred within the association to San Angelo, Texas.

Beginning in 1980, Multer served as manager of the Writ Fertilizer operation in Wall, Texas, and built the company into a major chemical and fertilizer operation. In 1994, he was selected from a long list of applicants to fill the manager position at Wall Coop Gin.

Soon, the gin was renovated into a highly efficient operation. Rather than having three inefficient plants, one gin was shut down and the other two were overhauled. Eventually those two gins were closed and a new, more efficient gin was built. When the rebuilding project started, it was a 15- to 20-bale-per-hour gin and averaged 18,000 to 25,000 bales annually. Today, it is a 32-bale-per- hourgin and averages nearly 53,000 bales annually. 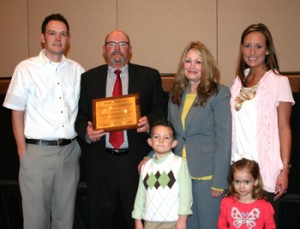 Multer has served many leadership positions in his community and currently serves as Texas Cotton Ginners Association President. He also is a former president of the Texas Agricultural Cooperative Council and serves on PYCO’s Executive Board.

“This award was very humbling for me,” Multer said. “I try to be really involved in everything about cotton. The industry has evolved, and we’ve made a lot of changes as a result of that.”

Also recognized by TACC was Bruce Simon of Enid, Oklahoma, who received the Distinguished Service Award. Simon graduated high school in 1972, and he began his 31-year coop career as a loss control representative for Farmland Mutual Insurance Company. In 1979, he went to work for Farmers Cooperative Grain Dealers Association as a service representative.

He then began working for Triangle Insurance Agency, Inc., in 1986 as Director of Marketing. In 1997, Simon was asked to relocate and manage the insurance agency’s office in Lubbock, Texas. He returned to his home state in 2001 and became Vice President of Marketing and Agency Operations for Triangle in Enid and held the position until his retirement in April 2010.

During his stint as vice president, Simon was responsible for the overall operations of four agribusiness agencies in a four state area as well as the marketing functions of Triangle in five states. He directed an agency and marketing team and coordinated with agency partners in marketing products offered by Triangle resulting in an increase in sales of property and casualty insurance products from $3.5 million to more than $45 million.

“I’m very honored that I was chosen,” Simon said. “After being with it for more than 30 years I do believe that Triangle is a very good company, and it has been a pleasure to work with them for so many years.” 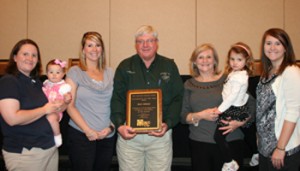 Johnson, the oldest of four children and the son of a commodity buyer, graduated from Richardson High School in 1973 and set off to pursue a baseball scholarship at Texas A&M University. He graduated a few years later and married his wife, Kristy, in 1977.

The first 10 years after college, Johnson worked for Cargill then joined the coop community by becoming assistant manager of Sunray Coop in 1988. After seven years there, he landed his first general manager’s job with Bee County Coop in Tynan, Texas.

In 2000, the board of Northeast Texas Farmers Coop in Sulpher Springs hired Johnson. During his 10-year tenure, Johnson has built his organization to where it is today with more than 92,000 tons in feed sales annually, covering a 100- mile radius serving more than 5,200 producers, and with average sales of more than $28 million.

Johnson is a past president of TACC and is on the boards of Triangle Insurance and the Texas Association of Dairymen.

Harold Bryant, Board Chairman said, “If Brad were to move to another job, his absence would be felt at the coop and in the extended community. He has worked diligently for our coop to put us in a position of high consumer confidence and brought us to a place financially where we can take advantage of purchase and expansion opportunities.”