TCGA Honors Ginner of the Year 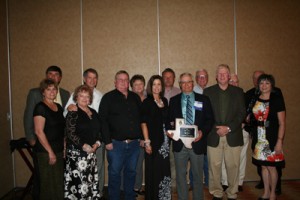 Buzz Cooper, manager of Texas Star Coop Gin, has been in the business for 37 years and was recently named the 2011 Texas Cotton Ginners Association (TCGA) “Ginner of the Year.”

Each year, TCGA awards this prestigious honor to an outstanding member. TCGA represents the cotton ginning industry and is a leader regarding numerous legislative and regulatory issues. Research and education to improve gin work environment are other high priorities for the association.

“I am very humbled by this award, and I am very proud of it,” said Cooper who also received the Texas Agricultural Cooperative Council (TACC) Ginner of the Year award in 2004. Cooper grew up in Ralls, Texas, and worked with his father who managed the Ralls Coop Gin. After graduating from Texas Tech University with a degree in agricultural education, Cooper began managing the C&R Gin in Ralls in 1974.

In 1998, Cooper sold his portion of the gin and moved to Union, Texas, to manage the Union Coop Gin. Then in 2004, Union and Wilson Coop Gins merged to create what is now Texas Star Coop Gin with locations in Union and Wilson, Texas. In its best year, the gin’s total output was 145,000 bales.

“My dad was a ginner, and my granddad was a farmer so agriculture has been in our family for a long time,” Cooper said. “My wife was Miss Rodeo Texas when we met, and my boys always have been involved in rodeos and stock shows. Ag is just all we know.”

Cooper and his wife, Kim, have two sons. Bonner earned bachelor’s and master’s degrees from Texas A&M, and Ross is a senior at A&M. Cooper said he appreciates how much agriculture has influenced his family.

“I appreciate the support from our customers, board and employees so much,” Cooper said. “This award is really for them as well. I know we wouldn’t be anywhere without them.”