The King of Kansas Cotton 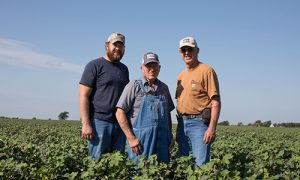 From left to right: Brian, Carl and Mike Seeliger

Whether raising his family, making a living farming or organizing and building a cotton gin, when Carl Seeliger sets his mind on something, he works until he achieves it. His family has a six generation farming legacy and is proof that with hard work and determination anything is possible – including growing cotton in Kansas.

“I will tell you what, it has been a good ride,” Carl said. “We lived in a house here with three little kids and we were poor. I joke you not, we counted pennies when we went out for groceries. It wasn’t easy, but I decided that I was going to make a living at this if it killed me. I worked two different jobs to keep family and everything going. Because when you have a dream that you are going to try to make work, you can’t be off messing around.”

Carl and his son, Mike Seeliger, were the first people to grow cotton in the Cowley County area in Kansas. His journey to growing cotton started one day when Carl was waiting on his wife to meet him for lunch at the fair. He was wandering around, checking out the various booths, when one caught his eye: a cotton gin. The gin shared some information about the benefits of growing cotton.

“There was something about it that stirred me up,” Carl said. “So I got home and grabbed the calculator. I could not make a liar out of the figures. I thought, bologna there is something wrong. So, the next day we were working out here in the shop, and we can work out in the shop and very seldom have to talk because Mike knows what I am thinking. Anyway, I said, ‘Mike I want you to take this brochure home with you and tell me where the figures are wrong.’ He came back the next day and we were working in the shop and he never said a word. I couldn’t stand it. I said, ‘Where was I wrong?’ He looked at me and said, ‘I couldn’t find anything wrong with it.’ I said, ‘Do you have guts enough to try it?’ and that is where it all started.”

The Seeliger family has raised cotton every year since 1985. After 10 years of hauling their cotton to a gin 150 miles away, Carl and Mike decided something needed to be done.

“We started growing cotton in 1985, and we were the first ones to grow cotton in this area,” Mike said. “We grew it for about 10 years and proved it could work. We had a base for cotton so we could grow it, but when the government program changed and other people wanted to get into cotton, we were hauling the cotton down west of Oklahoma City at that time. It was a long trip down there, and we knew if it was going to work in this area, we needed to have a decent gin. We got others interested in it and decided to form a cooperative. Dad was basically the ramrod behind it, and he put the gin together while I was doing the farming.”

They found a gin for sale in Oklahoma and bought it. A few of them in the community tore it down and hauled it to Winfield, Kan.

“He [Mike] is as big of a part of the gin being right, maybe more so than I am,” Carl said. “I worked at it, and I spent lots of time trying to find things and it wasn’t easy, but I will say one thing – true cotton people will do anything for you. They will take their shirt off their back and give it to you. If they are good cotton people, and there are so many-many cotton people in Oklahoma and Texas that helped me.”

Mike said they formed Southern Kansas Cotton Growers cooperative because they wanted it to be a collaboration among all the farmers in the community.

“When we started this gin in Winfield, we made it a cooperative because we didn’t want it to be known as our gin,” Mike said. “We got everybody in the community who had cotton involved in it and made it a community affair. They were not worried about whether the gin made a profit or not from them because it was paying back dividends to them if it made a profit.”

Today, Carl is at the helm of his family’s farm, working closely with Mike and his grandson, Brian Seeliger. Carl said he wanted to instill hard work and perseverance in the next generations of his family.

“We look at it as you have a job to do, and you do it,” Carl said. “Don’t walk and put it off until tomorrow or next week. Do it right then and just keep going. We have made a lot of mistakes. Anybody that tells you they have never made a mistake hasn’t done anything. Try to learn from your mistakes, but don’t quit. Stay right there and keep digging.”

He also said working with his family has been the greatest joy of his life.

“He [Mike] has always been there, and I saw that he had this completely in his mind,” Carl said. “When I decided to make Mike a partner, I had to give up a bunch of stuff to make him an equal partner. That is the best thing I have ever done in my life. It has worked perfect. Over the years, I can never remember him and I getting in an argument. He would know what dad’s thinking, and I know what he is thinking working out here in the shop.”

In recent years, Mike’s son Brian has returned to the family farm to carry on the tradition.

“One day I got a call and he said, ‘Dad, is there room for a big toolbox in the shop?’ I said ‘Sure, come on home,’ and I have really enjoyed working with him since,” Mike said. “He has the knowledge of a mechanic and is also good when it comes to all the new electronics, with all the GPS, it takes a programmer to program the combines or whatever you are doing.” Brian said he has enjoyed working with his family each day.

“I really enjoyed growing up as a kid on the farm,” Brian said. “It was always fun going and helping Dad with different things. I have always enjoyed running the old 4020 stacking hay in the summers and always loved the wheat harvest. They would throw me in the old tractor pulling the grain cart and that was fun for me. We work well together. We attack all challenges head-on, and we are still together to this day.”

From the time he was 20 years old, Carl did all of the wheat cutting on the family’s farm. When his grandson came back home to farm he handed over the reins to him, but he still knows what the machinery should sound like when it is running properly.

“I did all the wheat cutting and milo cutting and only had two combines with cabs before I got taken off of it,” Carl said. “The first time I had a cab they asked me why don’t you shut the door? I said I want to listen to the combine because I could tell what was wrong with it before it happened. That is what makes your machinery work when you stay tuned to noises and different click clacks.”
Carl said he has had his fair share of challenges over the years, but he wouldn’t trade it for anything.

“We need to be able to pass on this ground to the future generations,” Mike said. “It started out years ago when we didn’t know any different, we tilled everything, we would disc it, plow it, field cultivate it, then a rain would come and you would see a lot of soil leave the country with heavy rains. We went to no-till years ago and to me that is the way to go. It is a lot better for the ground, and you are controlling your runoff a lot better. It is a lot better for the biology of the soil and, hopefully, there will be something to pass on to future generations.”