The Legacy of Roy B. Davis 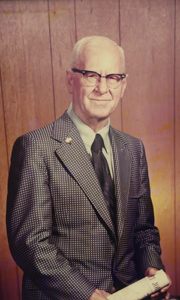 It is widely agreed that much of the success of the local and regional cotton co-ops of West Texas is attributable to one man: Roy B. Davis, General Manager of Plains Cooperative Oil Mill (now PYCO Industries, Inc.) from 1943 to 1971. He has been described as a man of vision, innovation and courage, and he was widely known as a man of character, sincerity and integrity.

Davis was born in McGregor, Texas, in 1900 and graduated from Lubbock High School and then Texas A&M University with a degree in dairy husbandry. Following graduation, he worked as a county agricultural extension agent in Gaines, Terry and Hale counties in West Texas from 1927 to 1932. He then served as CEO of Plains Cooperative Creamery in Plainview from 1932 to 1937 before joining the staff of the Houston Bank for Cooperatives. There, he traveled throughout Texas helping organize and advise farmer co-ops. It was during this period of his career that he adopted the co-op philosophy as his own. In 1943, Davis was hired as general manager of Plains Cooperative Oil Mill in Lubbock.

Prior to 1943, the oil mill struggled due to low volume, inadequate working capital, and low earnings, but under Davis’ leadership it became the world’s largest cottonseed oil mill. By embracing new technologies for oilseed processing, the mill’s daily crushing capacity went from 50 tons to 1,200 tons. However, he was always looking beyond the front gate of the oil mill.

“No single person was more important to the development of cooperative agriculture as a force in West Texas where he helped farmers form co-op gins,” wrote William N. Stokes, Jr., in the book Oil Mill on the Texas Plains. While Davis never sought personal glory or credit, there is no doubt about his contributions to the co-op and cotton industries.

Many who knew him and witnessed his accomplishments have described Davis as a visionary, a tireless and relentless worker, a man of the grassroots and a consensus builder. Gail Kring, retired President and CEO of PYCO Industries, Inc., first met Davis when he worked at the oil mill while studying at Texas Tech University.

“Roy was a quiet man,” Kring said. “He wasn’t loud or anything, but he was always thinking about co-ops. He was pretty serious about his business day in and day out, and he did a lot of work in Washington to protect the co-ops. He was very well known there and very well respected, and a very good voice for West Texas.”

In addition to helping organize local co-op gins, it was Davis’ vision that led to the creation of Farmers Cooperative Compress and Plains Cotton Cooperative Association to complete the co-op supply chain. He also helped establish Plains Cotton Growers, Inc.

“He was always looking out for the farmers by extending further into the marketplace and having control of the pricing,” Kring said. “He just decided he was going to help the West Texas farmers because they needed the co-op system, and the three regionals have always been supportive of each other and have backed each other up in critical times.”

“He was a patriot and believed in the American way and the farmers,” she said. “His heart was with the farmers, and he taught us to have those same values. He taught me that agriculture is the backbone of West Texas and our economy and how important it is to support the farmers. He was a wonderful man.”

“Grandad was always the kind that spoke softly and carried a big stick. He was a very humble person. I think a lot of that was because he was focused outward. He was focused on how to make a better life for the farmers, how to improve the industry, not just on himself. He never looked at himself as a visionary, but I think other people admired him, and we all admired him.” 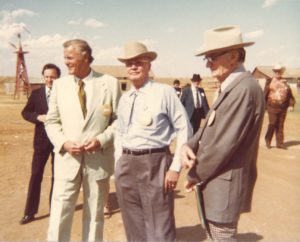 “He was just a good man, and he worked very hard,” Nail said. “Wherever he needed to go, he would go. He would go out to the gins, too, and visit with them about some of their problems. He was also such a gentleman as far as that goes, and he always seemed to know what to say and how to say it.”

Davis’ leadership and influence extended beyond West Texas cooperatives. He served as president of the National Cotton Council in 1968 and as its board chairman in 1969. He continued to serve as an advisor to the NCC Board of Directors until his death in August 1975. He also served as secretary of The Cotton Board and as president of the National Cottonseed Products Association, and it was his vision that eventually led to the founding of Cotton Incorporated.

“He was a big force in getting the enabling legislation for the referendum to establish what is now Cotton Incorporated,” said Duane Howell, retired farm editor at the Lubbock Avalanche Journal. “I never heard of anyone who didn’t think a lot of Roy B. Davis. He was universally liked and respected, and I think that was one of the assets that helped him accomplish so much in the industry for the good of all cotton, really.”

To honor Davis’ leadership and many accomplishments, the Texas Federation of Cooperatives and some of its member associations endowed the Distinguished Roy B. Davis Professorship in Agricultural Cooperation within the Department of Agricultural Economics at Texas A&M University in 1971.

Upon his retirement from the oil mill in 1971, Davis served as a consultant for Texas Tech’s Textile Research Center and for PCCA. Following his death on August 22, 1975, the PCOM Board of Directors approved the following resolution: 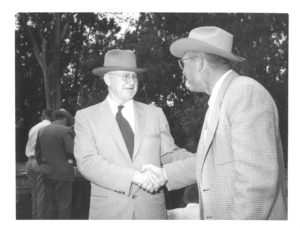 “Upon the death of our great leader and friend, we express our admiration and gratitude for the honor of having been associated with him during the period of growth and development of the cooperative cotton system on the High Plains of Texas. Mr. Davis was our inspiration in times of trouble, our support in times of need and a humble and appreciative friend in times of success. Monuments to his greatness stand all about us. He was instrumental in the growth and  development of a cooperative ginning, compressing, milling and marketing system which has been of untold benefit to cotton growers in this area. He was a man that walked with kings but kept the common touch. We will be forever indebted to him for his counsel and guidance and hereby dedicate ourselves to furthering the causes for which he labored so well.”

Likewise, Duane Howell wrote the following in the Avalanche Journal:

“Roy B. Davis was good, he was modest, he was loving and humane. But his 74-year life left no doubt that he was also great. When he walked among giants, they often seemed a little smaller.”