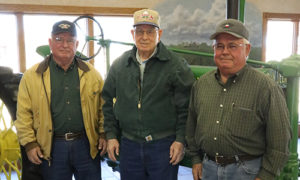 In the fall of 1927, Buzz Vardeman was born in San Saba County, Texas. The son of a cotton, peanut and peach farmer, Buzz had agriculture instilled in him before he even took his first steps. What he did not know as he grew up on the farm in Central Texas, though, was that one day he and his sons would help change the face of the cotton industry forever.

By the time he was a sophomore in high school, Buzz already had five original inventions he used on the farm. As a very bright and innovative young man, he was the one the neighbors called for help on their farm equipment – not the local dealership.

“During World War II, there wasn’t anyone left in the farming part of the world except the older guys and the people that were younger than me,” he said. “I wasn’t old enough yet to go to the service, so anyone that had trouble with their tractors came to me.”

On one such occasion, Buzz had gone to the local John Deere dealership in his hometown to gather some parts. It was there he encountered “the John Deere block man” – a meeting which would ultimately change the course of his life years later.

“The John Deere dealer said ‘I want to introduce you to this young man. Y’all need to take him and make an engineer out of him,’” he said. “So that started our conversation. Every time he would come through, nearly once a month, he’d ask me if I had any new ideas. That’s how we got started with John Deere.”

After moving to Lubbock at age 20, Buzz played major roles in some of the farming company’s most known implements. In 1947, he had the privilege to run and critique the first John Deere cotton stripper the company put on the market. Later, he would help develop the module builder, the module truck, and progress the mechanics of harvesters to add more headers to cotton strippers and pickers. He would also entertain individuals from countries all over the world, such as Australia, South Africa, and South America, looking to grow and harvest cotton in methods based on his success. Fast forward to today, where he and his sons played a key role in developing the famous John Deere CS690, the stripper baler, and the CP690, the picker baler.

“Every day you let your cotton sit out there, it is costing you money,” Buzz said. “For instance, we started out with a two-row stripper, then the four-row, and then we built the first eight-row. That was all built because of what I learned in 1950. We pulled one bale of cotton each day for 20 days straight to see what would happen, and that is where I learned that when cotton gets ready to go, that is the best it is going to be that day. You lose weight first, then quality. Either one costs you money. In other words, that is what motivated me to make these changes.”

Along the way, Buzz would meet and marry the love of his life, Joyce, and have sons Dean and Keith, who play a vital role in the farming and ranching operation today. Never forgetting that family was the most important thing, Buzz and Joyce brought up their children in the best way possible – right by their sides.

“Mom and dad were both extremely sharp individuals and very systematic in how they approached things,” said second oldest son Keith. “They did things in an orderly manner and always shared with us what they were thinking and talked about what their goals were. Watching them display those things growing up certainly influenced us all in a good way. Mom and dad never led us off on a path that wasn’t a good one.”

Speaking to his father’s natural knack for innovation and progress, oldest son and PCCA Board Member Dean echoed his brother’s praises.

“He is always looking for a better idea or a better way to do things,” Dean said. “He has been that way all his life. A lot of good things have come to pass because of that. He wanted to improve things and make them better, so he just undertook them. It is very rewarding, yet it is a very educational process and dad has been good to show us how that works. He gave us an opportunity a long time ago to work with him, start with him, and stay with him, and it has been good.”

Even Buzz’s grandchildren play an integral role in the farming and ranching operation today and get to learn from the three men who have helped shape the industry in insurmountable ways. Dean says working with his children and his nephew is a great joy.

“It has been a real joy and asset for me to have my children want to be involved in the farming and ranching operations that we have,” he said. “They are just the best help. They are willing to learn and put in a lot of effort and I have been really lucky to have that happen. All three of my children are just tied to helping here day to day among the other things that they do. Of course, Keith has a son that is farming here with us, too, and it is really good for us to work with him. It is a really close-knit group that way, and we all rely on each other a whole lot. It is really a rewarding time to work together, and we are together pretty much all day every day. Another rare opportunity I feel like that we have to participate with each other.”

In addition to sending the family farming legacy to the next generation of Vardemans, the family also has a source of strength in the cooperative system. In fact, when Buzz lived in San Saba County, his father helped start a peanut cooperative. Recognizing the business advantages of cooperatives in one commodity, they decided to stay with the business structure when they started farming cotton in West Texas. Today, Dean and Keith run the business the way their father always has.

“We have been doing co-op business all our lives,” Dean said. “It is an extension of your farming operation. It gives you control and ownership of more than just your farm. It allows you to work with like-minded people and all for a common goal of bettering the process of carrying your commodity on through the supply chain and to be able to receive some benefit financially, and otherwise from doin business together. I think it has added a lot of strength to the farming communities and farming culture out here in this part of the world.”

Keith agreed with his brother and noted how deep the benefits of the co-op run in agriculture.

“You know, that is really why you want to be in a co-op, is to help your individual operation,” Keith said. “Even though it involves a lot of people, it goes back to the family farm and that is where the main benefit comes back to you.”

From farming innovations to strong family ties and unique business models, one thing is for certain – the Vardeman farming and ranching operation will be sustainable for years to come.

“To me, I guess sustainability means the ability to continue what we have begun here,” Keith said. “To be able to use and maintain the resources we have here, all of the natural resources as well as the things we use to grow a crop and produce a product that benefits mankind and be able to do that over the long term, and remain viable from an environmental standpoint and a financial standpoint as well. This is where we grew up and our livelihood, and we certainly have benefitted from it. Even more than that, we want to see it maintained. It is the willingness to look at, adopt, and evaluate technologies and practices so that future generations can sit where we are today and report that they have been successful, and plan to keep doing so as well.”

At 92 years old, Buzz knows the value in making sure future generations of agriculture, especially those from his bloodline, have ample opportunity to keep living the same way of life he has.

“It’s like when they are growing up, you sometimes wonder if they are going to know how to catch on and follow through on things,” Buzz said as tears glistened in his eyes. “Dean and Keith have always been there when we were building parts and through changes – they have been a part of it all their lives. It’s then you realize that if something was to happen to me today, these guys could carry on for sure.”