Driving the tractor with Michael in the buddy seat, Gary Wilde dreamed of the day he would farm with his son. The journey to that dream wasn’t always what he planned, but faith and family made it possible for the Wildes to thrive in the face of adversity.

Teaching him how to work,” Gary said. “That is the way I grew up, and I think if you teach them a work ethic, it is something that sticks with them for the rest of their lives. He gives me so much knowledge now. It is unbelievable.” 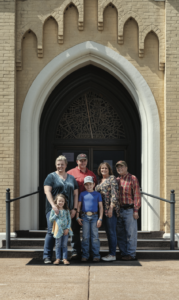 Gary Wilde and family stand proudly in front of Rhineland, Texas’, “Cathedral in the Cot- ton Fields” which his grandfather helped build.

Family has always been the number one priority for the Wildes. Gary and his wife, Judy, have been married 46 years, and together they have two children, Michael and Michelle. Gary has been farming since he graduated from high school. It was then that he began working for the Brown family, which he did for many years before getting his first piece of land to farm on his own.

“In 1975, I got the first farm from Judy’s folks, and we started building from there, and I worked for the Browns too. Then in 1981, they asked me to manage the co-op at Rhineland. So I did that, and it was probably one of the best moves because it was hard to get land, and my dad didn’t have any. As people would retire, I began to pick up land. I picked up more land than I could care for while continuing to manage the gin in 1989, and have been farming since. Managing the co-op was a good move for me. It really was.”

Michael attended Texas Tech University with intentions of being a doctor until he received a call from his dad one day. Gary had been in a motorcycle accident a few years prior and, while recovering, decided he needed more help on the farm.

“In school, I always took interest in science and everything, so that is why I started out pre-med. Then I was starting to dread looking at seven to eight more years of school. Dad called me and said, ‘man, after that last surgery, I sure could use you, you know you always have an opening here on the farm,’ and that was all I needed to hear,” Michael said. “I switched majors to agricultural economics, graduated within a year, and came back and started farming. I have been doing that ever since.”

Little did they know, both of their dreams would become a reality after that phone call. Today, Michael and his wife, Katy, are proud to have the opportunity to raise their two children, Garrett (9) and Hannah (5), on the farm. In 2013, Gary and Michael formed a partnership and began farming together. Judy is the third piece of the operation as she keeps the books for the farm and helps wherever needed. The Wildes grow cotton and wheat, along with raising cattle.

“We try to diversify between those,” Michael said. “We have two-thirds irrigated cotton and one-third dryland. We have been scaling back our dryland. It has been tough with the droughts and prices, and irrigated is a little more of a guarantee to an extent.”

The Wildes believe cooperatives are a vital component of managing risks and adding value to their operation. Their marketing strategy primarily employs a seasonal pool. Michael serves as a delegate to PCCA from Rhineland Cooperative.

They also try to integrate new technology into their operation whenever possible to help increase efficiencies and to benefit their bottom line. Irrigation technology has improved dramatically over the years. Gary remembers irrigating with ditches and aluminum siphon tubes early in his farming career. Today, technology developments make irrigation less labor-intensive and more precise.

“We have integrated a lot of technology into everything,” Michael said. “We have GPS on all our center pivots, and all the equipment has precision ag and yield maps. We also do a little bit of strip-till and minimum-till and integrate some of the newer fertilizers. We are going to get more micronutrients while we use less and get more out of it. Right now, we do some variable-rate fertilizer, but they are talking about variable rate irrigation, and that is something we will definitely be looking into.”

Farming equipment also continues to improve. Gary began farming on a 730 John Deere, an “ol’ poppin johnny.” He also graduated from a seven-shank chisel plow to a 54-foot one to help increase productivity through the years. To implement today’s modern harvest technology into their farming operation more cost-effectively, the Wilde family partnered with a farmer in South Texas to purchase and utilize a picker baler.

“We started partnering with a guy in Sinton, he sends his machine our way, and we send him ours,” Michael said. “It’s another way to diversify. They start harvest in August or September, and we have never had it where they were not finished in time. Usually, at the end of October is when we start so we can get it up here and get it repaired. It justifies the cost of the machine a little more.”

The cost of farming has undoubtedly changed since Gary began farming full- time. He said when he started farming, cotton planting seed was running about $8 per bag. Today, that cost ranges from $250-$400 per bag. Michael said controlling inputs and water are the most significant challenges they face in their farming operation.

“It is hard to control the inputs because it is competitive, whether it is land or inputs,” Michael said. “You also can’t control the weather, and that’s where the irrigation helps. During the drought of 2011 and 2012, we probably lost at least 50 percent of our pumping levels for our irrigation water. We have had some really wet years in 2016 and 2017 where the Seymour aquifer, which we are on, actually recovered quite a bit.”

With the unpredictability of the weather, water conservation and irrigation efficiency also remain a top priority.

“That’s probably the biggest thing in our area is water conservation,” Michael said. “We try to make it stretch as much as we can. We still have a little furrow irrigation, but we are trying to go to center pivots. We have a few patches of drip irrigation, but drip doesn’t work very well in our area.”

Good farm management is something Gary learned from his grandfather at a young age and passed down to Michael. 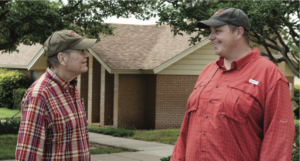 “Just mainly management. I hate weeds. You can ask Michael,” Gary said. “My grandpa, we would chop cotton with him from the time we were four years old on, and he farmed too, you know. On a farm, I don’t want any weeds on it. I want it neat and clean. I take care of leased land just like I take care of ours.”

As Gary continued to reminisce about his grandfather, he told lessons that went beyond farm management that have stuck with him throughout his life as he has farmed and raised his family.

“My grandpa used to say, ‘if you ain’t got the money, don’t buy it.’” Gary said. “You know he came through the depression and all that stuff. I don’t know if it is the good Lord whispering to me, but all the time I will come up with sayings he used to say, but that’s one he said all the time.”

The Wildes believe that management goes far beyond ensuring the farm is clean and productive – it’s also focusing on people and relationships.

“Mainly management and care, and taking care of people,” Gary said. “My landlords, they are just my family too. I have a bunch of them. We let them know everything. Just treat people right and be good to them. Keep it managed. It just all works. And the Lord, I’m not going to lie–I pray a lot, and it gives me some relief, so you know the wreck did do one good thing, I guess.”

From instilling a good work ethic and moral character, Gary always tried to set an example for his children and grand- children to follow. Michael looks up to his dad in every way, and he has learned so much from him.

“It is just a good thing to look up to, to keep everything going,” Michael said. “Since I was little bitty, he taught me to drive and how to drive a tractor, hunt and fish, and have some fun too. He let me have all that. He taught me how to be a good father. I try to raise my kids the way he did me and to farm the way he does. Pretty much everything I do is following in his footsteps.”

Of all his admirable qualities, Michael said his dad’s unwavering faith and servant’s heart are the two things that stand out to him the most.

“Probably the biggest thing is his faith,” Michael said with pride. “No matter what, he always looks up and prays and gets us through it. He says we can get through it and make it through. That’s probably the biggest thing, his outlook on life and always puts everybody in front of himself. He always puts himself last. Everybody – the family, landlords, employees, even though he is struggling he puts everyone else forward.”

The most important value to him is to lead by example. Both he and Michael are very involved in the community and the church and try to help people wherever they can.

“Family, friends, and religion; That’s life to me,” Gary said. “I have faith, real faith, or I think I do. I pray every day. I just see what He’s blessed us with. I mean, we didn’t have anything, and we have just come to where we are today, you know we aren’t rich, but we aren’t poor. I can help the kids and grandkids, help employees and people, and they know if they need something, they can come to me.”

Despite the challenges of farming, Michael also reflected on the joys of being part of the family farm. Having the opportunity to farm the same land his grandfather did, which has been in the family for over 100 years, is a blessing.

“Just being able to farm together,” Michael said. “There are a lot of highs and lows and stresses, but just the freedom to be your own boss and do what you want to do, grow what you want to grow. From planting to harvest, the best thing is a bountiful harvest. There is no bigger trophy or reward than that.”

Gary’s dream of farming alongside his son is now a reality. Now he has new hope for the future of his farm and the Wilde Farms Partnership.

“I told my grandson that I hope Pappy makes it to heaven, and when I do, I hope I get to look down here one day and see your dad as a grandpa, old like me, and you are there with a tractor and your son is with you. I hope to look down and see you. That would be the happiest day of my life.”