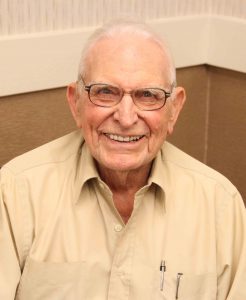 Lila Bradshaw chose this single word to describe her father, Jack Holcomb, a leader in his local and regional agricultural cooperatives. In the aftermath of the September 11, 2001, attack on America, Bradshaw, like many Americans, was emotional and fearful of the future. She turned to her father for some comfort.

“He has always been the kind of person you go talk to when something is bugging you or you are worried about something,” Bradshaw said. “He said, ‘Well I have been here for a lot of this— the stock market crash, the depression, and World War II. I just think that you need to know that the American people have great strength and when we need to take care of something, if we get together we can do it.’”

At 100 years old, Holcomb has experienced both great hardships and great joy in his life. One of three children, Holcomb was raised during the Great Depression. His father was a real estate developer. At 10 years old, his family moved from Miami, Florida, to Port Isabel, Texas. When the Great Depression began, his father lost all of his customers in the years that followed. There was no longer a need for his profession, and he was unable to find work. Holcomb took a paper route at age 10 where he could make five dollars per week. His family lived for three years on the money he earned.

“So, life was hard growing up, I mean it was hard,” Holcomb said. “I had a scholarship to the Coast Guard Academy; four years of scholarship. It was given through a representative and an appointment and everything in Connecticut, and I couldn’t go. My family could not do without the five dollars I could make in a week for us to eat on. I have been through some pretty rough times, but I have been very fortunate to have taken all kinds of jobs.”

“I ended up as an engineer on that and got a good 25 percent bonus for two years of work, so I became independent all of a sudden,” Holcomb said. “I bought 20 acres of land in the Progreso area when I was 20 years old. I paid 20 dollars an acre for it, and

I was going to build a home on it. Well, it was 10 years later that I came back and built my home. I have been here ever since.” Holcomb has farmed in the Progreso area since he moved there.

“I was so conservative that I did not work on borrowed money. I worked on my own money,” Holcomb said. “I bought more land when I could, and I kept it.” Holcomb started out his farming career with citrus. After a freeze knocked out his crop, he began row-crop farming.

“I went through all that deal with the row-crop farming and started back on cotton and a lot of vegetables,” Holcomb said. “Just whatever I thought I could make some money out of. I have had a thousand acres of irrigated land that I have farmed for 60 or 70 years.”

Holcomb still manages the finances on the farm, and he has partners in the operations that run the day-to-day farm activities. At 100 years old, Holcomb still serves on the board at his local coop gin, Progreso Coop, as well as on the board of Valley Cooperative Oil Mill (VALCO).

“For all practical purposes, I don’t do anything other than I still belong to some boards, and the boards have put up with me,” Holcomb said with a grin. “I have been on the board at VALCO for 42 years, and they still won’t let me go off, but I have enjoyed it and still enjoy it.”

He said one of his favorite parts of being part of the coop gin is the chance to visit with other farmers over coffee in the mornings. Holcomb also said it allows farmers to help one another and share information.

“Cooperatives are important because they do help one another,” Holcomb said. “If you belong to a cooperative, you feel like everybody is your partner. You aren’t working against them, you work with them.”

Today, Holcomb has two children, Lila Bradshaw and John A. Holcomb, six grandchildren and five great-grandchildren. When he had children, Holcomb said his primary goal was to give them everything he didn’t have growing up.

“My biggest goal in life was to have my children go to one school, and they were going to graduate in that same school,” Holcomb said. “We weren’t going to move so they could have friends and all like I didn’t have because I went to school in five states. My children were also going to get a college degree. I wasn’t going to say where, but they were all going to go to college,” he recalled.

Holcomb succeeded in fulfilling his goal. All of his children and grandchildren earned college degrees. Bradshaw said her father and late mother were both incredible role models for them growing up. She said her mother encouraged them to love to read and learn, and her father was an example of an impeccable work ethic and commitment.

“When he undertook a project no matter how large or how small, he gave it everything he had and really saw it through,” Bradshaw said. “Of course, anybody that really pays attention on a farm knows there is adversity, and we have experienced it. You could have the best cotton crop in the world sitting in the field, and a tropical depression comes in and you don’t pick anything, but my father’s attitude was always so resilient and optimistic. He just did not let himself get defeated by those things. He would turn right around and say, ‘Let’s plant the next crop.’”

Holcomb said he hoped he passed down to his children, grandchildren and great-grandchildren that honesty is the most important thing in life. He also said he has been very lucky throughout his life.

Throughout his life, Holcomb has enjoyed the journey. Even though he faced some difficult hardships in his life, he has created a legacy that will last for many years to come. His positive attitude and honest values have set a wonderful example for his children and paved a way for his grandchildren and great grandchildren to follow.