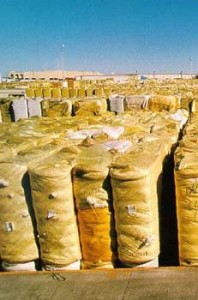 The U.S. cotton market has entered a period of time traditionally characterized by projections and estimates, and this year is no exception. But in order to keep such forecasts in perspective, this year it is imperative to maintain a macroeconomics viewpoint because cotton is being influenced by world events more than ever.

The first significant forecast for the 1998-99 cotton marketing season was the anxiously awaited prospective plantings report released by the National Cotton Council (NCC) on January 30. That report, based on a survey of U.S. cotton growers, indicated they would plant 12.1 million acres this year, down substantially from the 13.82 million planted last year. The survey reflected more attractive grain prices and frustration with low cotton prices at that time.

The largest cuts contained in the shocking NCC forecast came in the Mid-South where total acreage may fall to 2.2 million, a 21.4 percent drop from last year’s 3.4 million acres. Deep cuts also were seen in the Far West where acreage was expected to fall approximately 18 percent, from 1.3 million last year to 1.0 million. In Texas, cotton acreage was projected to fall 9.5 percent from 1997 to 4.98 million acres this year.

However, USDA released its planting intentions report on March 31. That report, based on a survey of producers at a time when cotton prices were attempting to rally, showed acreage at 13.2 million and it caught the market completely off guard. The result was a dramatic plunge in future prices in the days following the USDA report.

An important determining factor will be weather at planting time. If wet conditions prevail in early spring, especially in the Mid-South, farmers could be discouraged from planting corn and, instead, stay with cotton. By early March, additional concerns were noted regarding the intense, El-Nino related storms that had been pounding California and the Southeast U.S. and their potential impact at planting time. But, the bottom line remains that if U.S. cotton acreage declines as NCC predicted in January, it should result in much lower carryover stocks at the end of the 1998-99 marketing season.

Much of this scenario is based on continued strong demand for cotton, especially in the domestic market. At its recent annual meeting in San Antonio, NCC forecast U.S. consumption at 11.5 million bales on continued strong economic growth and consumer spending in the 1997-98 season.

USDA’s outlook data for the coming year also was supportive to NCC’s estimate. The data indicated domestic consumption in 1998-99 could increase to 11.7 million bales. Meanwhile, U.S. exports are expected to reach only 6.2 million bales, down from 7.3 million projected for the current season.

Despite the drop in anticipated cotton exports during the coming marketing year, a smaller 1998 crop and sustained domestic demand could result in ending stocks of 2.70 million bales in 1998-99, according to some estimates, a dramatic decline from the current year’s 4.30 million. That would result in a stocks-to-use ratio of about 15 percent.

The situation is similar throughout the rest of the world. With world average cotton prices now considerably lower than those of a year ago, NCC expects other cotton producing countries to plant less cotton in the coming year.

The council estimates world production at 86.50 million bales, down from USDA’s 90.88 million in 1997-98. Keep in mind, though, most of this reduction is found in NCC’s U.S. projected plantings.

World consumption also is expected to decline but not as much as production. Current estimates put consumption at 89 million bales compared to 89.18 million this season.

The greatest unknown factor at this time remains Asia and its financial troubles which should continue to be closely monitored for their significant effect on U.S. and world trade. It is another sobering reminder that U.S. cotton competes in a world market.

Concerns linger about the potential for lower U.S. cotton sales to Asia and other areas of the world even though U.S. sales have been strong in 1997-98.

In fact, sales actually exceeded USDA’s 7.3 million bale target in the week ending February 19, forcing the department to raise its export projection to 7.5 million bales in its March supply/demand report. But, sales and shipments are two very different things.

One major U.S. cotton merchant recently noted that much of the U.S. cotton sales to Asian countries remain to be shipped. As of January 22, the U.S. had sold approximately 3.5 million bales to the region but shipped only about 50 percent of that figure, and competition for export business during spring and summer was about to increase.

Australia, a major exporter, has produced a record crop and will be a major competitor for Asian markets. Additional competition also was expected to come from Argentina, West Africa and Uzbekistan.

In April, China announced a tender to sell a significant quantity of cotton in the world market, injecting additional concern among many market analysts.

Thus, efforts to anticipate developments in Asia can be confusing and confounding. Export sales cancellations there would have a dramatic and bearish impact on U.S. carryover stocks and, ultimately, cotton prices.

Will it happen before most U.S. growers plant their 1998 crops? It is another reminder that the world can be a difficult place to comprehend, much less predict.