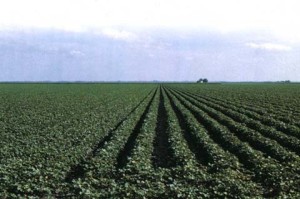 The summer cotton market normally is driven by weather conditions, and this year is no exception. For now, new crop cotton prices are taking direction from Mother Nature with particular interest in the increasing potential for a bumper U.S. cotton crop.

The drought and disaster concerns that gripped the cotton market early in the season now have turned to talk of a record U.S. crop. More than a few people have pitched the idea that a 21.0 million bale crop is not out of the question. However, most industry observers find it difficult to peg this crop any larger than the 19.5 million bale mark, and many favor a figure closer to 19.2 million bales.

A larger than average U.S. crop is expected despite the fact that fewer acres were planted to cotton than the market anticipated. In fact, the long awaited June USDA planted acreage report came in at the very bottom of the expected range at 15.55 million acres. This represents a 4.5% increase over last year and is as much as 300,000 to 400,000 acres below the expectations of some analysts. More importantly, the June plantings report was almost identical to the department’s March planting intentions report.

USDA made some acreage adjustments to its planting report on a state basis, down 100,000 acres in the Southeast and up 20,000 acres in the Midsouth. The Midsouth was up due to acreage increases in Mississippi, Missouri and Arkansas. However, the increased acreage in these states is on marginal cotton land and may offer little reason to expect a crop above the 19.2 to 19.4 million bale estimate that already is accepted by most in the market. In fact, the common thought is that the 2000 U.S. crop currently is as big as it can get. The cotton plants now will need excellent weather to hold their current pace, and any decline in growing conditions could easily result in a smaller crop.

Due, in part, to a projected 2.3 million bale increase in U.S. cotton output this season, world production is expected to increase slightly to 87.37 million bales in 2000-01 from an estimated 87.28 million in 1999-00, according to USDA’s World Supply and Demand estimate released July 12.

Although world consumption is pegged to rise in 2000-01, the United States is the only country in the world expected to significantly boost its cotton production figure, thus placing the country in a position for potentially higher export sales. USDA currently projects U.S. exports will reach 8.2 million bales versus 6.8 million the previous year.

“This marketing year is unique due to the fact that domestic demand is not expected to substantially increase, so the U.S. will be looking to the export market for a much higher percentage of cotton sales,” said David Stanford, Plains Cotton Cooperative Association’s vice president of marketing.

“Overall, market observers are optimistic about the upcoming crop. Of course, weather anxiety will be a constant factor in the market until the crops are out of the field,” he added.

The cotton harvest soon will be underway in South Texas, where the crop currently is thriving. The area’s producers, whose cotton is the first harvested each year, have the opportunity to take advantage of the market’s preferential to high quality cotton. A wide diversity of cotton varieties were planted in the area this season, including a major increase in the plantings of stacked-gene types, which are expected to yield an increased amount of high quality fiber. Although some light insect pressure has been noted, the market focus has been primarily on the timely rains and beneficial warmth the crop has received. With the assistance of favorable weather conditions, producers hope to begin harvesting the larger than average South Texas crop in late July.

Meanwhile, the West Texas crop, which is considered to be late this year by most standards, is doing quite well according to market observers in the area.

“The West Texas crop outlook is positive at the moment, especially now that much needed rains have provided relief from a long-lasting drought,” one area analyst said. “We are very hopeful for the upcoming crop year,” he added.