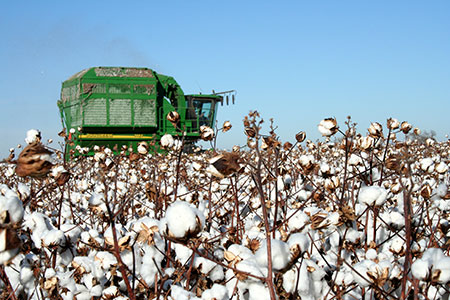 Since the beginning of 2015, the U.S. Department of Agriculture twice has raised its estimate of 2014-15 world cotton production and twice lowered its estimate of world consumption resulting in further growth of already burdensome ending stocks.

In its January supply and demand reports, USDA raised world production by 190,000 bales to 119.17 million and lowered world consumption by 360,000 bales to 112.24 million. The revised estimates resulted in a 560,000-bale increase for world ending stocks to 108.64 million. Most of the production increase was attributed to the U.S. crop which the department raised by 160,000 bales to 16.08 million. U.S. domestic use and exports were unchanged, but U.S. ending stocks were increased 100,000 bales to 4.70 million. The bearish balance sheets from USDA along with negative economic news helped keep nearby cotton futures prices in the upper 50-cent range for most of the month.

U.S. retail sales in December were down a seasonally-adjusted 0.9 percent, the poorest performance since January 2014, according to one analyst. Undoubtedly, it was disappointing news for some cotton traders when the data was released in mid-January. Meanwhile, the World Bank lowered its estimate for global economic growth. The International Monetary Fund also cut its global growth forecast for 2015 and 2016, and China’s fourth quarter GDP fell to its slowest pace in 24 years. Additionally, China’s National Development and Reform Commission reconfirmed cotton import quotas this year will be limited to the 4.1 million bales mandated by the World Trade Organization.

With a tight lid in place on cotton futures prices, U.S. export sales surged. From the week ended Dec. 18 through the week ended Jan. 29, export sales of U.S. cotton totaled 2.43 million bales due to strong foreign mill demand for medium- and high grade cotton. During that period, marketing-year highs were set for three consecutive weeks with 546,200 bales being the highest weekly sales figure. The export sales cooled off in February, but it was enough to impact USDA’s next monthly supply and demand estimates.

In its February reports, the department raised its estimate for U.S. cotton export sales by 700,000 bales to 10.7 million. However, consumption by U.S. textile mills was lowered 150,000 bales to 3.65 million, but estimated U.S. ending stocks fell 500,000 bales to 4.2 million. USDA again raised its estimate of world production for the 2014-15 marketing year by another 200,000 bales to 119.37 million and lowered consumption a whopping 990,000 bales. Consequently, world ending stocks now are pegged at 109.84 million bales, up 1.2 million from the January estimate. Just days after USDA raised its estimate for U.S. export sales, the department reported a net reduction of 69,700 bales for the week ended Feb. 12 following cancellations of 81,700 bales by Turkey, 19,700 bales by China, and 13,300 bales by Mexico. Meanwhile, weekly U.S. cotton export shipments have remained strong despite congestion at West Coast ports resulting from the ongoing labor dispute. As of Feb. 18, there was an estimated one million bales of U.S. cotton at the ports waiting to be loaded on vessels going to Asia, obviously causing sleepless nights for some merchants and shippers worried that letters of credit from foreign mills could expire before the cotton could be shipped. However, there were news reports late Feb. 20 that a tentative deal had been reached by the union and port management.

February also was a fairly good month for bulls in the cotton market as futures prices began to advance. Through Feb. 18, March and May futures contracts settled on positive ground 13 out of the previous 17 sessions at the Intercontinental Exchange (ICE). Also on Feb. 18, May cotton settled above 65.00 cents per pound, and December settled at 65.47, up 56 points.

January and February also saw improved sales in the spot cotton market. From the week ended Dec. 31 through the week ended Feb. 19, producers sold a total of 600,892 bales online. Average prices received mostly ranged from the low- to mid-50s during the two-month period. At least some of the sales volume was triggered when it became apparent the loan deficiency payment (LDP) would be declining as USDA began raising its calculation of the adjusted world price (AWP).

Finally, there have been no further developments regarding the anti-dumping investigation brought by the Turkish government against U.S. cotton suppliers and the threat of a provisional duty placed on U.S. cotton imported by Turkish mills.