A Bale Bustin’ Year for Some South Texas Gins

Long before the 2003 cotton crop was planted in the Coastal Bend of Texas, industry observers knew there was potential for an excellent turnout. Despite obstacles ranging from delayed planting to late-season downpours to an extended harvest and ginning season, many gins in the region set new records for the volume of cotton handled.

Rains totaling as much as 40 inches in some locations during November and December 2002 provided abundant soil moisture for the 2003 crop. In fact, some fields remained too wet at normal planting dates throughout much of the Coastal Bend; therefore, the new crop got a late start.

“After our producers got their crops planted, they received some timely rains throughout the season,” says Midway Gin and Grain Coop Manager Joe Jenkins. “Everyone harvested two bales or more per acre,” Jenkins adds. Consequently, Midway ginned a record 39,900 bales, beating the previous record by 2,400 bales. “The crop came in fast, and we had our best ginning year ever and finished in 59 days.”

“Due to the late start in our area, a lot of corn acres were switched to cotton,” says Moreman Community Gin Manager Theodore Kallus. “It was a lot different from 2002 when drought had a severe impact on our production.” Throughout much of the growing season, Kallus was anticipating a crop of 40,000 to 42,000 bales until Hurricane Claudette hit in July.

“The hurricane hurt our yields some, and we ended the year with 37,154 bales ginned,” Kallus notes. “It was our second best year on record, and if the hurricane had hit 15 days later, its impact would have been much worse. However, harvest was steady, and we finished ginning in 65 days which was about 20 days faster than in 2001.”

Like Moreman Community, Coastal Bend Coop ginned its second largest crop ever, according to Manager Mike Polk, however, harvest and ginning extended far beyond a normal season.

“We got 20 inches of rain during a 14-day period during late September and early October,” Polk explains. “We planted late and started ginning two weeks later than normal,” he adds. “Then, the fall rains meant the cotton needed more drying, and that slowed down the gin. There was one period where we were running at half capacity.” In spite of the hardships, Coastal Bend finished the year with 32,000 bales ginned, just 1,000 bales short of the coop’s record volume.

“Our turnout was better than normal, and the farmers that were able to harvest early really benefited,” Polk adds. 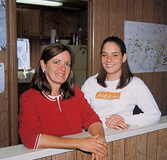 “We ginned 47,191 bales this year,” says Office Manager Kacy Frazier. “Our previous record was 40,326 bales, and a normal crop is considered to be about 30,000,” she adds. “We had a good ginning season despite 18 inches of rain during harvest which cut our gin speed by 20 percent.”

Petronila Coop finished ginning the 2003 crop before much of the rains that plagued its neighboring gins and set a new volume record at 15,579 bales.

“Good weather and the varieties our farmers planted were major reasons for our record year,” Manager Diana Milligan says. “Back in March and April, some of our farmers were ready to abandon their crops. Then, a two- inch rain fell, and that changed the crop outlook overnight.” Gulf Coast Coop Manager Jim Massey also reported a new record in 2003.

“Production in our area was spotty, but it was good overall,” Massey explains. “We totaled about 40,500 bales ginned, and our previous record was 37,000. Our volume would have been even larger had the rains fallen at the right time.”

“Our members planted a little later than normal, but the ground was ready,” says Mike Thompson, manager at True Coop Gin. “We had plenty of early season moisture, it grew out in a hurry and it never really suffered,” he continues.

“The harvest was like nothing I’ve ever seen before,” Thompson adds. “There were two consecutive nights when more than 200 modules were called in to the gin, and that was unheard of.” True Coop finished the 2003 season with a record 24,848 bales ginned, almost 5,000 bales more than its previous record volume.

Although not considered part of the Texas Coastal Bend, Winter Garden Coop Gin, west of San Antonio, also set a new record thanks to excellent yields and “eight or nine new members,” according to Manager Mike Yeary.

“There were a lot of three- and four-bales-per-acre yields in our area,” Yeary says, “and our total volume was 38,188 bales when we finished ginning on Dec. 1. Our previous record was 26,000 bales in 1991.” Like so many other South Texas gins, Winter Garden overcame similar wet weather difficulties. 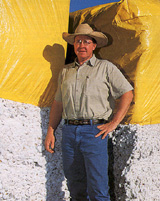 “We received 16 inches of rain on July 5, and the gin office was full of water,” says Yeary. “We also saw more root rot problems this year. With all that in mind, it was an extraordinary year.”

Another extraordinary year was reported by Smith Gin Coop located north of Corpus Christi. With more than 84,000 bales ginned, Smith Gin beat its previous record by more than 20,000 bales.

“Like a lot of gins in this area, our members planted late,” says Manager Lee Tiller, “but they planted very quickly. Consequently, the entire crop matured at the same time, harvest was fast, and we were quickly covered up here at the gin.” Tiller adds, “It was unbelievable how fast it was harvested and hauled in. We weighed in 300 modules in one 24- hour period.” Exceptional yields also were noted in the Smith Gin area which is predominantly dryland production.

“A lot of farmers averaged two bales per acre across the board,” says Tiller, “and one dryland field yielded more than 1,400 pounds of lint per acre. Good soil moisture at the beginning of the crop and some timely rain played a major role.”

Some gin managers also attribute some of the 2003-crop yields to the boll weevil eradication program. Many others agree that the quality of the crop was excellent.

“South Texas is building a reputation for longer staple and good micronaire,” says Gulf Coast Coop’s Jim Massey. “About 95 percent of our members’ cotton was over the base loan value,” adds Winter Garden’s Mike Yeary. With excellent soil moisture already in place, Coastal Bend-area producers and ginners alike are looking forward to 2004.

“I’m happy we made it through the 2003 crop year,” says Theodore Kallus at Moreman Community. “We’re ready to go again.”