The 2016-17 cotton crop is certainly one for the books. Welcomed increases in yield and quality graced cotton gins as a result of timely rains and late-season warmth across areas of Texas, Oklahoma, Kansas, and New Mexico.

Increased volume is always welcomed in the business operations at PCCA, and President and CEO Kevin Brinkley shared how important it is.

“Volume almost always helps performance of our marketing pools,” Brinkley said. “With improved pricing compared to the previous year, the combination of more pounds and more equity improved our ability to get more money out earlier than normal. That couldn’t have been more critical to our growers.”

The 2016-17 cotton crop arrived as a late season surprise to many. In order to get the unexpected amount of cotton harvested and ginned, Brinkley said those in the cotton industry put in extra hours to make the most of the rare occasion.

“Having a market for an unexpectedly large crop is critical,” Brinkley said. “I am personally thankful for the long hours and hard work put in by our growers and gins. They made the most of this opportunity.”

Even with the increase in the amount of cotton on the market this year, commodity prices were not driven down in the usual manner. In fact, they remained steady, allowing PCCA grower-owners to get the best possible price for their cotton. PCCA Vice President of Member Services Charley Triplett commented on the market for the crop year.

“Volume is typically a good thing for our members, our gins, and PCCA, too,” said Triplett. “Regardless of prices, more pounds help everyone. When you have a bigger crop, the market doesn’t respond well and the market actually got a little stronger as the year went on. That is a very unusual thing that doesn’t happen very often.”

PCCA Director of Cotton Services and Gin Accounting, Steven White, said the welcomed increase in volume came as a surprise to many in the cotton industry when harvesting began and provided benefits to producers.

“As people started harvesting, they realized that the yields out there were great,” White said. “So once they got in the field, I think everybody realized that it was a large year. I would say many grower-owners saw an improvement from last year in both yield and price.” White also said that the larger-than-expected crop made getting money to the farmers the top priority for his department.

“Our number one priority is handling all the invoicing with so many bales and with the season being longer than it normally is,” White said. “The priority was delivering money as soon as possible.”

The cotton crop that caught almost everyone by surprise has already set the bar for next season, according to Brinkley.

“It is hard to imagine a better yield and quality result than the 2016 crop,” Brinkley said. “However, if we can get close, it would continue to help improve the financial condition of our growers, and that is a huge concern in today’s environment.” Triplett said his hopes for next year’s crop are similar.

“Hopefully,” Triplett said, “we can have another good crop because volume helps solve problems.” 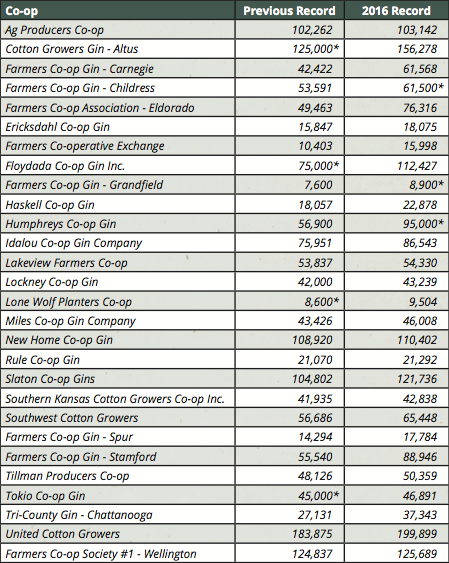