A collection of dust-filled gauges, four tires cracked by dry rot, and an assortment of parts smothered with oil as thick as molasses were bound together by rusted metal. The dilapidated condition of the tractor did not intimidate 16- year-old Dustin Stone as he began the challenge of restoring one of the Stone family’s antiques to its former glory. Although Dustin had little mechanical experience, he was determined to make his great-grandfather’s 1935 Farmall F-30 “as good as new.”

In the tractor’s heyday, it belonged to Robert A. Lutrick, a Hale County, Texas, cotton and grain producer. 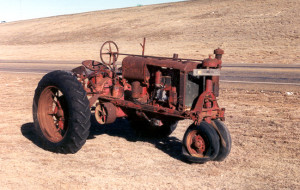 “I was only three when daddy bought his first tractor; a brand new, bright red, 1935 Farmall,” Dustin’s grandmother, Pauline Lutrick Stone, says. “I was little, but I noticed the plow horses disappeared when the tractor made its appearance on the farm,” she recollects.

After his retirement in the early 1980s, Lutrick donated his tractor to the Hale County Farm and Ranch Museum. Naturally, after remaining stationary for many years, the 1935 model tractor had seen its better days. Due to the museum’s limited space and the immense size of some agricultural machinery, refurbished equipment is placed under shelter at the museum while the remainder is stored outside where it is at the mercy of the elements. Lutrick’s Farmall was parked on the grass in a long line of tractors and implements to patiently wait more than 20 years for a complete makeover.

In 2001, Dustin became interested in restoring his great-grandfather’s tractor and entering the completed project in a national competition. His interest in tractor restoration was sparked by his older brother Steven, a member of the 1999 Abernathy FFA tractor refurbishing team and winner of a national contest sponsored by Chevron Texaco Lubricants.

Each year, Chevron Texaco Lubricants awards a total of $10,000 to students with a knack for bringing antique tractors back from the brink. The Chevron Texaco Tractor Restoration Competition, which allows contestants to compete as a chapter or enter individually, encourages FFA members to learn how a tractor operates from the inside out while building a sense of camaraderie with teammates. In addition to the technical aspects of restoring tractors, students are exposed to the importance of business management principles, including time and financial management skills, as they apply to the farming industry.

As participants are working on the tractor, they track the process in a workbook developed by Chevron Texaco to aid them with record keeping, expense management and project coordination. The completed tractors are not transported to the National FFA convention. Instead, judges evaluate each entry on appearance, mechanics and safety by reading the workbook and conducting student interviews.

“I was really interested in restoring a tractor, and I thought my great- grandfather’s Farmall would be perfect to rebuild and enter in the contest as an individual project,” Dustin says. “It took some hard work, but I think it has meant a lot to my family to have this tractor looking brand new again,” he adds. 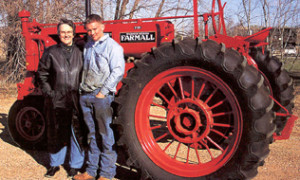 After: Dustin Stone and his grandmother Pauline Lutrick Stone.

For eight months, Dustin spent every spare moment working on his tractor. His mechanical skills improved greatly in a short period, and many valuable lessons were learned through trial and error. For instance, Dustin learned the importance of taking care of minor details when he worked for two days to get his tractor running before noticing it was out of gas. He still tolerates a bit of good-natured ribbing from his agriculture teacher and classmates over that comical mistake.

Restoring an antique tractor can be an expensive undertaking. Luckily, the community rallied behind Dustin and helped when possible. Citizens Bank of Anton provided financing for Dustin who later paid the note in full with his contest winnings. Sam Farris, owner of Farris Equipment Sales, offered his facilities, machinery and technical assistance while Larry Wright of Treadco, Inc., was instrumental in locating tires for Dustin’s Farmall. Also, Joe Thompson Implement and Dorman Allen hauled the tractors belonging to Dustin and the Abernathy FFA from one shop to another for repairs and to contests at no cost.

“An amazing number of people have been incredibly generous with their resources, knowledge and time,” Dustin’s father, Don Stone, says. “It really shows the community’s commitment to the youth in this area. Without all of the local support he received, it would have been impossible for Dustin to enjoy the success he has.”

In fact, Dustin and his FFA Chapter did well with their tractor restoration projects. More than 400 entries were submitted in the 2001 Chevron Texaco Global Lubricants Tractor Restoration competition. Dustin joined 10 individual finalists, and Abernathy FFA was one of six teams to be selected for competition on the national level. Both Dustin and the Abernathy team were named first run- ners-up in their respective contests. Cash prizes of $1,500 were awarded to Dustin and the team for their accomplishments. The 2001 Abernathy FFA Tractor Restoration Team included: Terrell Campbell, Rueben Contreras, Adrian Hernandez, Fabian Hernandez, Brice Meiwes, Jared Shannon, Jeremy Stone, Eddie Sytsma, and Ty Thompson.

Texas won the distinction of being the only state with two nationally qualifying teams.

“Abernathy and Cotton Center were two of the six restoration teams picked to compete on the national level in 2001,” says Gerald Kelley, agriculture sciences teacher at Abernathy ISD. “It says a lot about the quality and dedication of the kids in this area when two of the six best tractor restoration teams in the entire nation are within 25 miles of each other,” he comments.

Under the direction of Gerald Kelley, members of the Abernathy FFA chapter have participated in the Chevron Texaco Global Lubricants Tractor Restoration Competition four consecutive years. The chapter qualified for the national competition all four years, winning the team competition twice and placing first runner-up two times. However, Dustin was only the second student from Abernathy to enter the contest as an individual competitor.

One of Kelley’s friends, an antique tractor enthusiast, coaxed the teacher into incorporating the tractor restoration contest into the curriculum of his General Ag Mechanics class. After winning the national competition the first year the chapter competed, Kelley was hooked.

“Many of our kids come from agricultural backgrounds and have some knowledge of internal combustion engines, but the kids’ mechanical skills and understanding greatly improve through the hands-on experience this program provides,” Kelley says. “We start out with an old, junk tractor, and the kids build something they can be proud of. I like to attribute our chapter’s success to good kids, hard work, and lots of fun,” he concludes.

“It’s amazing what Mr. Kelley and his students accomplish,” Don Stone says. “I think Dustin learned to appreciate some of the difficulties generations before him had to endure without the use of modern tools. A lot of technology evolved from these antique tractors,” he adds.

The students work on their tractor restoration projects as high school juniors and present their finished project at the competition the following year. Kelley involves his students in every aspect of the restoration process. The students participate in hauling the tractor to Abernathy from the point of purchase, chasing down parts, and making the journey to compete at the national convention. By the time the team has spent two years restoring and presenting their project, Kelley estimates he will have traveled approximately 20,000 miles with his students. 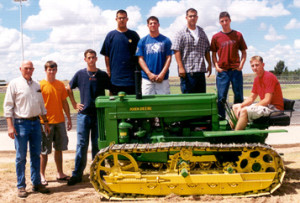 Rather than using school funds for the often high-priced tractor restoration projects, Kelley owns most of the tractors the class has restored. Each year, he locates and purchases the tractors, parts, and paint used in the class. The Internet has been a great place to track down specific tractor components, and assorted parts have been purchased from Pennsylvania to California and many states in between, Kelley says. Kelley parks the antique tractors at the school in anticipation of the day that one of his past students will come by to crawl up on the tractor he restored and crank it up for old time’s sake.

“I’m building quite a collection,” Kelley says. “I suppose I’ll eventually have too many tractors to keep around the ag shop. When that time comes, I might donate them to a museum. If I don’t, my wife will have one heck of a farm sale when I pass away,” he says with a smile.

The Stone family still owns the antique tractor Dustin refurbished. In fact, the family will return great-grandfatherLutrick’s fully-restored 1935 Farmall F- 30 to the Hale County Farm and Ranch Museum when Dustin is ready to let it go. The tractor, now “as good as new,” will earn a place in the covered area of the museum overlooking the grassy outdoor area where the rusted machinery once was parked for more than 20 years of its existence.